Overall, Logitech’s G51 proved itself a worthy contender in the world of surround gaming audio. In general, Logitech has taken the right approach to designing a gaming audio system, by building a system that addresses the concerns of fidelity and dynamic range instead of going for cheap thrills like ‘boom and sizzle’. I was impressed by the system’s power, and its ability to deliver plenty of room-filling output from a compact package. I also appreciated the conveniently-located, user-friendly controls.

The system produced very good overall sound quality, and a level of low-end impact from the compact subwoofer that belied its small size. Its gaming-specific features also set it apart from its competition in a way that is not trivial, such as the dual-mute feature and the ‘gaming’ matrix. While not quite on the same level as Logitech’s Z-series systems, that’s not the point here, and the G51 system proves that there truly is room in the Logitech product lineup for a middle ground in performance between the value-oriented stuff and the top shelf stuff. 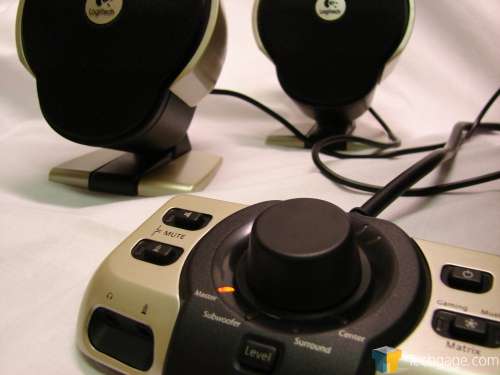 So far, however, I’ve shied away from pointing out the fact that the G51 system’s benefits come at a price that’s not insignificant. The gaming market has often been indicted for being a place where manufacturers inflate price tags artificially, and I feel that the G51 system’s MSRP is a bit steep at $199, which hurts the overall value of the product. $149-$179 would be a much more reasonable price range for the G51 speakers, I feel. While I think the G51 misses the sweet spot on pricing, it’s not by much, and other major players in the gaming market often do far worse.

The Logitech G51 5.1-channel speaker system brings some real substance to the table, and I’m pleased to hand the G51 a Techgage score of 8/10. Its thoughtful feature set and well-executed design are a testament to Logitech’s fastidiousness, and their continued commitment to the gaming world as well as the multichannel speaker product category.