by Jamie Fletcher on September 4, 2012 in Peripherals

Just when you thought you had all the buttons you could ever need, along comes an MMO that slaps you in the face with a combat rotation thought up by a guy with three arms. Enter Logitech’s 20 button monster, the G600. Read on as we attempt to find out if it’s possible to tame even the most complex battles with such a mouse.

Logitech tends to do a fairly good job with its software, and I’d regard it as some of the best available for peripherals. The software that comes with the G600 is a little thin on features… until you read into it. Opening up the software panel you are shown a very glossy and fancy interface that’s not over the top, and it performs very well. But looking at the bottom row, you only see four buttons relating to the mouse. The home page, some limited customizing of buttons and DPI settings, and the color controls.

Flicking through, you’ll notice a great deal of features missing; no independent X and Y axis control on DPI, no multi-character macros or advanced features like that. It all seems rather bear – until you switch modes. On the first page, you are given a toggle between on-board memory or ‘automatic game detection’. Toggle this and the software becomes a whole new beast. 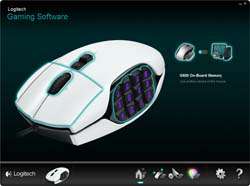 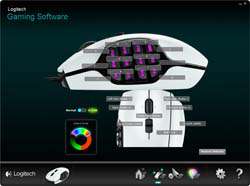 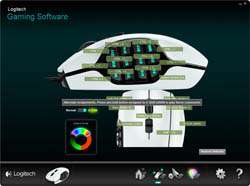 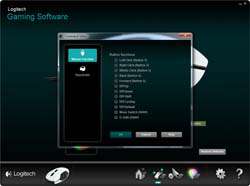 I’ll be honest, these extended options were not obvious at all to me. Normally when setting profiles up, you are given a choice to upload them to the peripheral if it has memory. With the G600, working inside its on-board memory profile is extremely limiting and about 70% of the functionality is missing. You have to switch to software detection for full functionality. This means you need the software installed for full functionality; you can’t just set it and use on another PC unless you want to give up on all the extra features. Some of these extras I would deem essential for on-board storage (like independent axis control for DPI). However, all the features you’d want are there in the software mode, plus a few more. 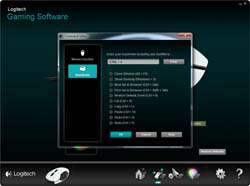 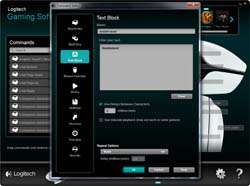 When you run the software detection mode the first time, it’ll scan through your installed games and then give you the opportunity to install pre-made profiles for each of them. It will not have profiles for all your games, in fact, it only found profiles for 7 out of the 50 or so games I have installed (not that all my games need profiles, but the exclusion of Rift was a little disappointing). When you browse through the configuration sections now, much more is made available, but remains hidden at the same time. 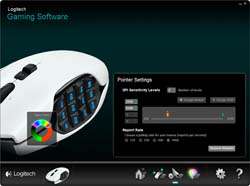 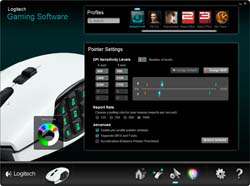 In an attempt to remove clutter, it seems many of the options and features are not shown until you activate something else; right click, drop-down and sub-menus, or toggle a check-mark. A lot of experimenting and learning is required to find things, such is the joy of a ‘simplified’ interface. I cannot complain too much though; once familiarity sets in, it’s quite intuitive and smooth. Pretty much anything you would want a mouse to do, can be done. Extended macros with looped playback, media control, various system hot-keys, application shortcuts, and it even supports Unicode text input.

However, there is one thing that just goes above and beyond… LUA scripting via Logitech’s API. Yes, that same scripting system used by the G15 keyboards and the like with LCD displays. If you are familiar with LUA, you can read into Logitech’s API and then implement functionality well beyond simple macros. Just what exactly is far beyond my capabilities (sorry). 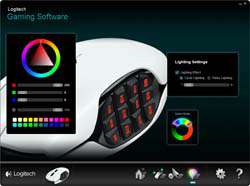 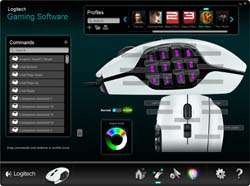 There are still some peculiarities with the way the whole switching modes and profiles works. Setting DPI options in the ‘Default’ game profile affects all other game profiles unless you set them manually to something else. But if you go back to button configuration and switch mouse profile, it’ll ignore the DPI settings saved for that game and use the game profile’s default DPI. If this sounds confusing, it is. Each game profile can have three sub-profiles, each with its own DPI levels. All this flexibility does have its drawbacks it seems. The good news is that you can disable per-profile DPI settings and make it universal.

As well as default and individual game (or application) profiles, you can set something called a persistent profile. This is a manual override that ignores application switching. Any profile you create can be set as persistent; this is useful if you are switching applications and the profile switcher isn’t recognizing the game/app; it can also be used if you are playing games that are similar in controls. 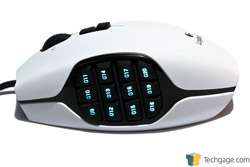 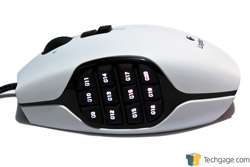 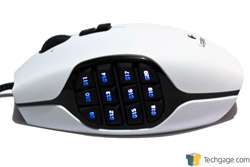 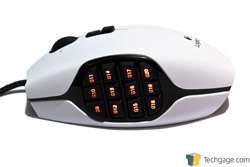 Switching over to some of the cosmetic settings, a fantastic range of colors are available with various RGB sliders, different illumination levels, even pulsing and color fades (including speed), so you can really tune the color to whatever you wish. Again, all of this can be set per game and on each sub profile.

All this multi-profile, sub-profile and G-Shift adjust settings can be a bit bewildering to work through. For the most part, it behaves itself, it’s just that it can take a long time to go through it all and set things up, especially with the layers of options and pop-up menus.

When it comes to using the mouse on a daily basis and gaming, it can take a while getting used to the extra functions, and the fact the entire number row is available under the thumb. The twelve buttons are split into 4 rows of 3, split into 2 slightly concave sections; buttons G13 and G16 having lips so you can feel which side of the array your thumb is resting on. The thing is, I found myself swapping the two sets of numbers around. My thumb naturally rests on the first bank of numbers 1-6. Those keys are readily accessible by my left hand on the keyboard. It’s the second set of keys that are more useful, 7-=.

Swapping the two sections around was much more comfortable on the thumb. The buttons are easy to press too. The extra weight may make moving the mouse around a little more difficult for low DPI users, but it also reduces jitter when pushing the thumb buttons. 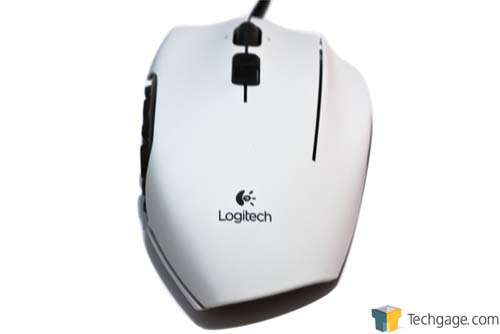 The interruption from the G-Shift did become an issue. Not just the fact it would cancel my camera control, but occasionally throw off the tracking for a split second, resulting in the mouse jumping across the screen briefly. I inevitably ended up disabling the button after a while.

The button layout under the thumb was actually quite intuitive, due in part to the lips on the two buttons. The concave recesses also made it much easier to tell which key was which. While I never did become reflexive with button placement, it certainly helped spread some of the more complex combat rotations to two hands (SWTOR‘s Jedi Sentinel has way too many active abilities to balance).

In the end though, I’m in two minds over the Logitech G600. The shift key being a constant interruption with the odd case of tracking loss, plus the limited options available for on-board memory does kind of sour the deal. The shift can be disabled, but that kind of cuts the number of buttons available in half. Having to be consciously aware not to do anything else with the mouse while using the shift just becomes a frustration. But the thumb layout and extremely extensive software really does make up for it. The software really is in a league of its own and something I wish was more common with peripherals. The claw like grip is also very comfortable, despite the extra height due to the buttons.

The G600 can be found for around £70 (£80), which is near, or just slightly over the price of a Razer Naga. You do get the extra buttons and extensive software though. If you can put up with a couple glitches and/or disable the G-Shift key, then it’s a great mouse and worth the consideration if you play a lot of MMOs or need a number of programmable buttons within easy reach.