In a move that many people welcome, the world of PC peripherals has been steadily migrating away from the cluttered desks filled with cables and wires. By removing said cables and wires, the industry is finally to a point where we almost have as many wireless options as we do wired. The problem today though, is that for gamers, there really hasn’t been a true ‘gaming’ wireless mouse that can offer the same performance and feel that a wired mouse can provide. Most wireless mice today come in a mouse and keyboard package and while there have been companies that have attempted to provide the gaming community a to notch wireless mouse for gaming, almost all have shunned these offerings for their tried, true and trusted wired optical gaming mice.

One company that has been leading the charge has been Logitech. Founded in 1981 in jolly old Switzerland, Logitech has been an innovator in the PC peripheral industry since there beginning. With their success, Logitech is now a publicly traded company on the NASDAQ with the call letters of ‘LOGI.’ The simple fact that they are a publicly traded company is a testament to the success Logitech has had and with this success, they have devoted a lot of time and effort to bring you and I the latest and greatest in gaming hardware for your computers.

There are many things that have become standard functions on all mice bearing the tag of ‘gaming.’ These include fully adjustable, on the fly DPI settings, an optical eye (preferably laser), programmable buttons and most importantly, a comfortable feel. Logitech’s G7 appears to fit all of the criteria mentioned above and more. Being a fully wireless gaming mouse, it offers a laser eye with a max DPI of 2000 but can be programmed down with buttons on the mouse itself. If it is anything like my previous mice, the comfort level should be high as well. On paper, the G7 looks to be a winner but can it deliver the performance that we all expect from a gaming mouse? Let’s find out.

The G7 came to me much the same as most anything does from UPS, FedEx, etc’ in a box. Once said box was opened, we see the retail packaging. The box screams ‘Logitech’, but informative none the less. 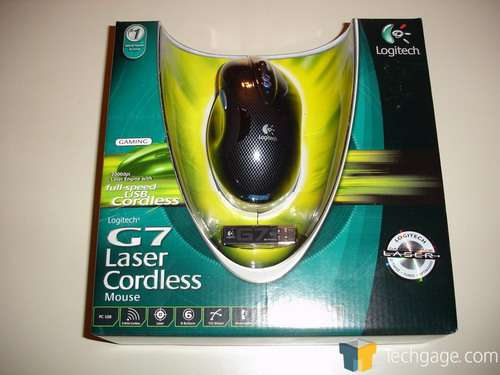 Once we flip the box over we see’ more info! Here we find all the vitals of the G7 from the mouths of Logitech themselves. There are a few bits of information that stick out to me more than the others; with the first being that the G7 comes with 2 rechargeable battery packs. This is a nice extra because when one battery gives up the ghost, you can simply pop out the dead one and place the freshly charged batter in the mouse. This all should take no more than 9-10 seconds. 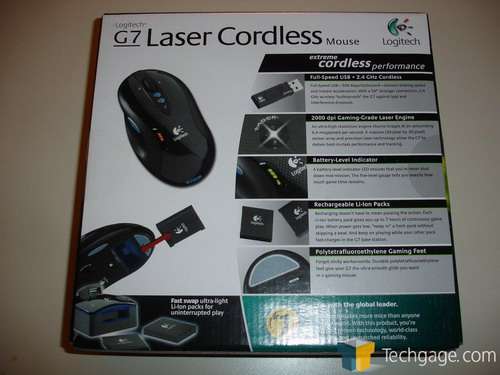 Moving on, once we get the box opened, we find that the mouse and all the included goodies are still secure in a plastic molding. This is to keep the hardware in place during shipping and transportation of the mouse. 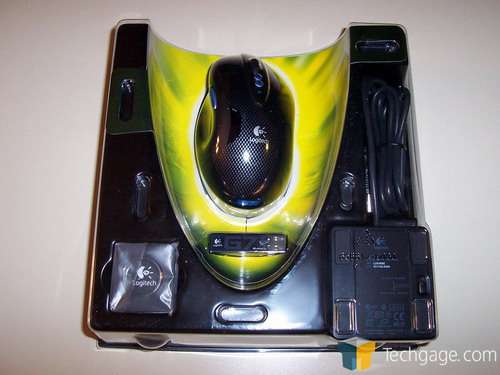 Turning the plastic casing over, we find a cleverly hidden message in the backing of the plastic. Hidden somewhere in the paper is a well placed message letting the user know just exactly they are getting into. Can you see the message? 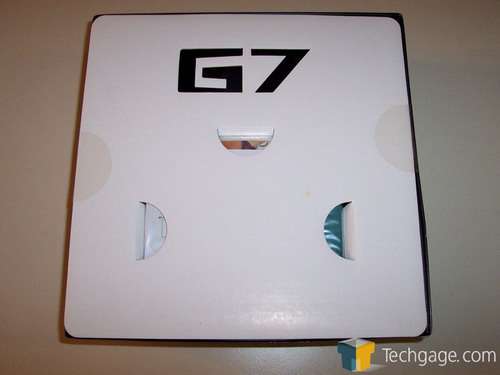 Silliness aside, we open up the packaging and get all of the hardware out. Once placed upon the desk, we can start to take a closer look at all of the included doohickeys that come with the G7. Starting off, let’s take a look at the USB stick. This is the 2.4 GHz adapter that will allow your PC to communicate with your mouse and vice versa. This USB stick fits in any standard open USB port and does not have to be plugged into a USB 2.0 port.

The stick is smaller than almost all thumb drives but has that same rectangle-ish shape to it and can easily be mistaken for one. Notice the large lettering on the stick. More subtle reminders of just exactly what hardware you are working with. 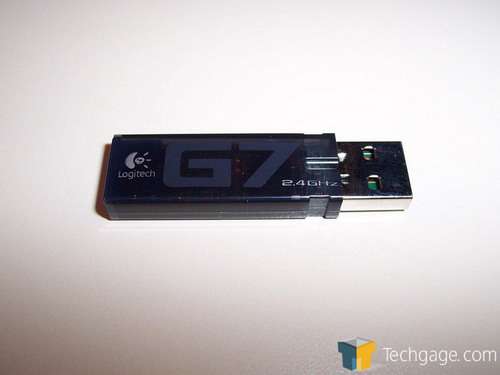 From here, we will take a look at the batteries included. Take note that I did intend to say batteries and not battery. Because a main concern and gripe with most wireless mice today is the battery life and the recharging station included with most, Logitech decided to go a completely different route with the G7. Instead of a recharging station, you have a plain looking base station.