To test out the G7, I played a few of my favorite games. CS: S is a must and not to far behind it is Rise of Legends and BF2. In all of these games, especially the first person shooters, accuracy is a much. The adjustable DPI settings are wonderful and allow precise aiming when zoomed in on an opponents head. I found the ultra high DPI setting of 2000 particularly helpful when driving a tank in BF2. The 2000 DPI setting allows you to pivot the tank’s turret at particularly high speeds.

This is good for when someone is shooting at you from behind and you do not have the time to turn the entire tank around to get a good shot at your persistent enemy. With my current monitor being a Dell 24′ 2407WFP, the full screen of Rise of Nations is large. With a higher DPI setting, I can drag my selection box around my troops a lot faster than I would be able to at a lower DPI setting.

I did run into a few problems. As an avid Firefox user, I cannot live without multiple tabs open at once. To open up more tabs, I simply click on the home icon with the middle mouse button. With the G7, the middle button wants to lean left or right and for me, it’s more to the left than anything. I wish the middle button was a bit sturdier and not so prone to going one way or the other. This isn’t something that would make me not purchase this mouse, but something that could easily be fixed my Logitech on future modules of the G7.

With all this said, the only huge complaint that I have with the Logitech G7 is the exclusion of a forward button. On the left side of the mouse, as shown in the pictures above, we can see that there is a back button. This is fine and good. However, I have become quite accustomed to programming different functions in games to the forward button and it is frustrating not having that button to work with. Not to mention when I am browsing the internet. Damn it man, I want to go back to the page I just came from but I can’t because there isn’t a button. Now I have to go all the way up to the top of the page and clock on the forward button. I know its not much but it’s certainly an inconvenience. 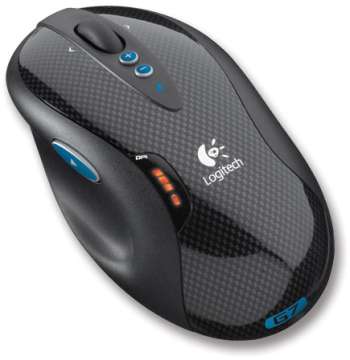 When it comes down to it, the Logitech G7 is hands down the best wireless gaming mouse that money can buy. During gaming sessions, even in fact action games such as Counter Strike Source, I did not notice a bit of lag and if it were not for the exclusion of the forward button, and the wire of course, I would not be able to distinguish between the wired and beloved MX518 and the G7. The response is that good.

The feel of the mouse is classic Logitech, comfortable. The addition of a second battery is a wonderful touch as well. No more placing the mouse on the recharge stand over night thank you very much! All you have to do now is remove the dead battery, place the fresh one in the mouse and then plug the dead one into the charger. It’s as simple as that.

This is a mouse that has found a home on my gaming PC and this editor has no qualms with recommending the Logitech G7 to anyone with the money to spend. If you are in the market for a wireless mouse, look no further than this one. The G7 has earned a 9 out of 10 and an editor’s choice as well. The G7 is a masterpiece in mouse design and because of this, everyone should have one.