Helping to set Logitech’s G710+ apart from the crowd is its large collection of non-standard keys, such as media keys, macro keys and others. A major complaint I’ve seen from many who’ve been considering a mechanical offering is that most don’t include dedicated media keys, so Logitech sure seems to have listened.

At the top-left are the M1, M2 and M3 keys – in essence, macro bank switchers. Each M key changes the functions of the G keys, which allows you to have a total of 18 macros at-the-ready at any given time.

Of these keys, the “MR”, or macro record, is perhaps the most useful. While it’s not unique to Logitech, this key allows you to quickly record macros without the use of software – perfect for when you need a macro quick but are already in a game. The right-most key, with the icon of a joystick, is your Windows-key toggle. Enabled, your Windows key will remain unusable. 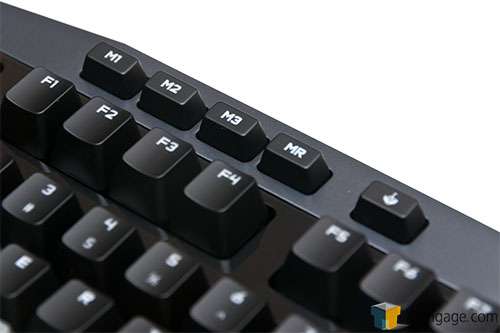 Towards the right-side of the G710+, we see two LED-function keys and also basic media keys (play/pause, stop, back and forward). The first LED key to the left adjusts the WASD and arrow keys, while the one next to it adjusts all of the others. The entire keyboard has four levels of brightness, but unfortunately for those who want it, no “pulse” mode exists. If there’s any issue I can speak of here, it’s that the LED behind the left-most LED key is positioned in such a way that a portion of the icon remains unlit. This could have been done out of necessity, but it does kind of stand out. However, if there was ever a perfect use for the hashtag #firstworldproblems, this is it. 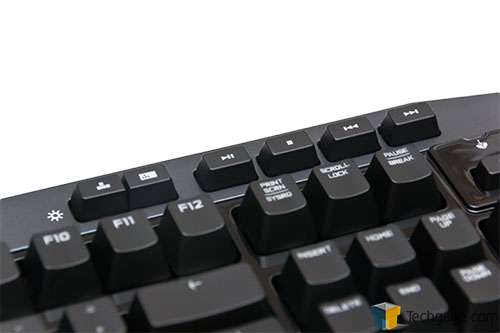 Similar to other Logitech G keyboards, this one includes a volume roller and mute/unmute button towards the top-right of the keyboard. It’s been a while since I last used a roller like this for the volume, but this keyboard has reminded me of how much I appreciate it. It feels more natural to increase and decrease the volume this way, although I do think it’d be nice if the software allowed you to increase the acceleration of the roller so that you can go from bottom to top a bit quicker. 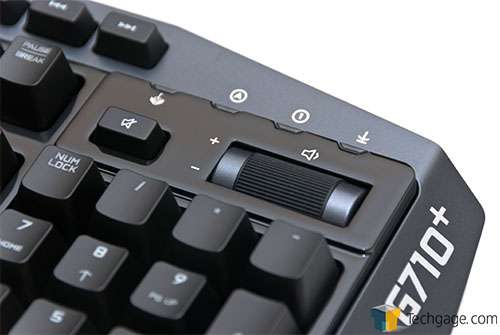 On the left side of the keyboard we find the G1 – G6 keys. These are surrounded by an orange border which lightly carries on the theme of the rest of the board (more orange is found at the back, on the cord and on the macro keys). These six keys are separated into groups of two, making it easy to find the right one without looking. These keys also make use of CHERRY MX Brown switches. 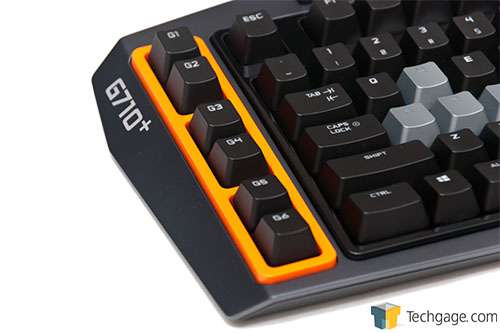 The back of the G710+ is pretty uneventful, although it does look quite unique compared to most other keyboards. Towards the right, you’ll notice slits that will allow a cord to pass through. Given its positioning, this couldn’t be used for a mouse, but it could be used for something like a USB desktop mic or some other USB accessory. 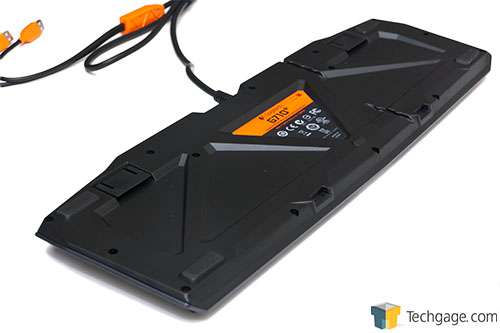 And here we have what I’m sure has to be the beefiest keyboard cable I’ve ever laid my hands on. The cable that comes straight out of the back of the G710+ is very thick, but as you can see in the photo below, it splits off into two sections. The keyboard will function with only one plugged in, but two will be required if you want to reliably use the USB port found on top of the keyboard (not pictured, but located directly in the center back of the board). 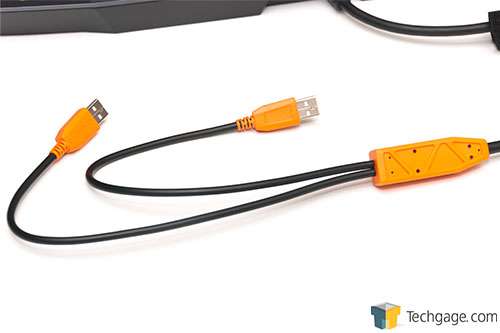 The G710+ includes a wrist rest, seen below. While it matches the rest of the G710+ aesthetically, I do feel it’s one of the flimsiest wrist rests I’ve come across. It simply doesn’t instill much confidence that the tabs will go long without snapping – a feeling I never experienced with the well-designed wrist rest that came with Cooler Master’s Trigger (seriously, that thing is a tank). If you’re not rough with your gear, you’ll likely be fine. As I plan to make use of this G710+ for the next few months, I’ll update the review if I do encounter an issue. 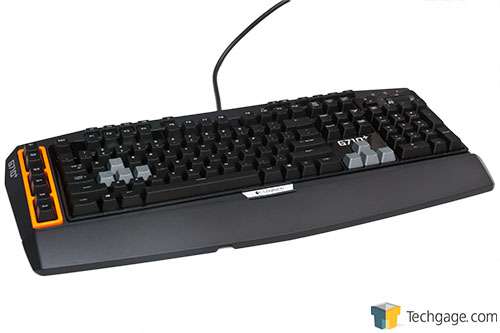 Finally, a quick look at the backlighting. In the photo below, I have the brightest LED mode active, and as you can see, no key is left alone. I should note that while there is an orangey LED look to the left side, that’s just the effect of there being an orange border with white LEDs nearby. 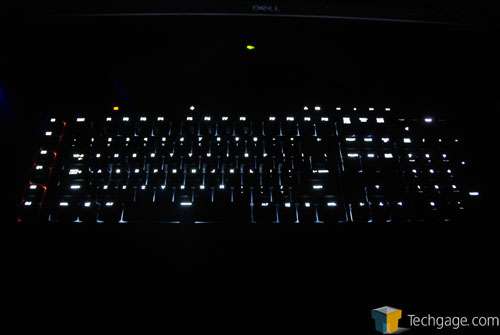 White LEDs are not for everyone, but I’m a bit of a sucker for them. I really like the look of both the G710+ and the LEDs, perhaps even more than the tougher-looking Cooler Master Trigger, which featured complete red LED coverage.

With the tour of the G710+ finally concluded, let’s get right into a look at Logitech’s software.