Logitech’s software hasn’t changed too much over the past couple of years, and as we’ve covered it in its latest iteration multiple times before, I’ll avoid going into extreme detail here. I will however cover the basics, including the process of setting up a macro or some other alternative function.

Once the software is loaded, you’ll see a simple start page that shows off the keyboard (sans the +, for some reason). From here, you can click on either the G keys to the left or the Macro keys up top to be brought to the configuration page. This, for the most part, is the software.

There are very few options to tweak outside of the macro configuration, and don’t expect CM Storm Trigger level of customization – you can’t simply click on any key you want and change its function. Most of the flexibility here is limited to the G keys.

Before going further, I have to question Logitech’s attention to detail here, or rather, lack of it. The image used for the G710+ isn’t that clear, and it’s horribly aliased around the edges (for the record, the option within the software to enable HQ images was in fact enabled). A minor niggle to be sure, and one that doesn’t affect the functionality, but it really stands out. Fortunately, the configuration does make up for this, so let’s get into a look at that. 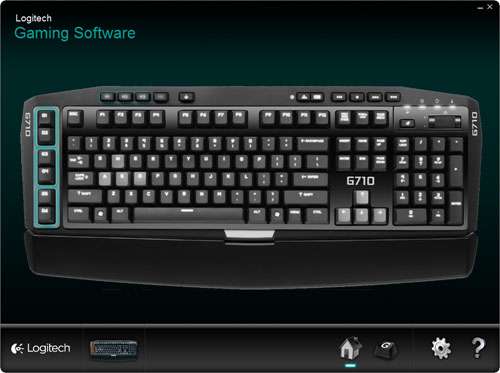 When you first enter the configuration screen, the software will try to detect all of the officially-supported games you have installed. If a game you want isn’t detected but the profile exists, you can add it manually. Each profile has preset “commands” that are designed to work right out of the box with the game, and you can assign any of these commands to the G1 – G6 keys. This saves time if the game you want happens to already be supported, since most commands you’ll want will already be made available. This is especially useful for a game like The Witcher, where you could configure the G keys to change your signs (Aard, Igni, Yrden and so forth). 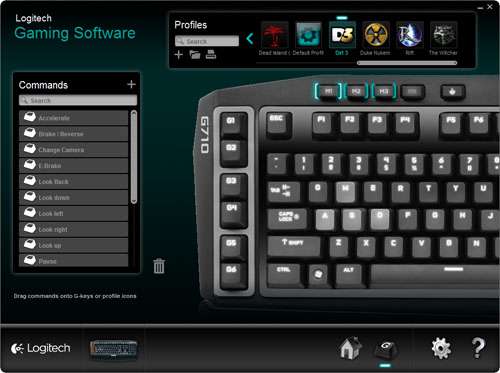 If you need to create a profile, it’s easily done. You simply need to hit the + key up top, type in the name, find the executable and then be on your way. Because a profile can be tied to the game executable, that profile will automatically become active whenever the game is – another very useful feature.

Adding your own command is again pretty simple. There exist a number of different command types to choose from, which can range from a simple keystroke, to multiple (macro), text block (useful if you need to retype the same thing often), mouse or media function, hotkeys, shortcuts and Ventrilo. This sort of flexibility is quite honestly impressive. Being able to use one G key for a macro, another for a quick shortcut and another to act as a push-to-talk in Ventrilo is very cool. And in all of my tests so far, all of the actions have executed without a hitch. 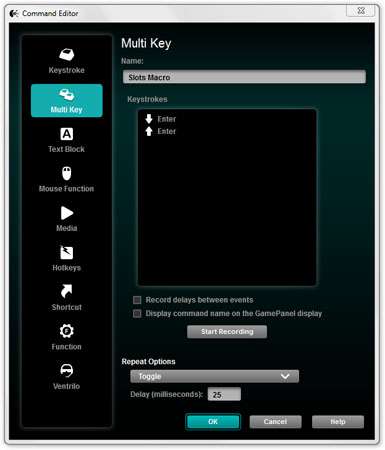 One area I really have to commend Logitech for is the macro creation. It’s about as no-nonsense as you can get. You simply click the “Start Recording” button and type in whatever you have to, then click again to stop. You can preface the recording by telling the software to acknowledge the pauses, or you can add delays after the fact. From there, you can choose whether to use the macro as a toggle or have it execute as long as the button is pressed. It’s simply the easiest macro creator I’ve ever dealt with.

When your macros are created, you can go back to the main page and click on a G key and edit the function in. In this particular screenshot, I created a macro that simply types out “So, let’s test this out, shall we?”, with its natural delays (yes, I let that type in via the macro!). 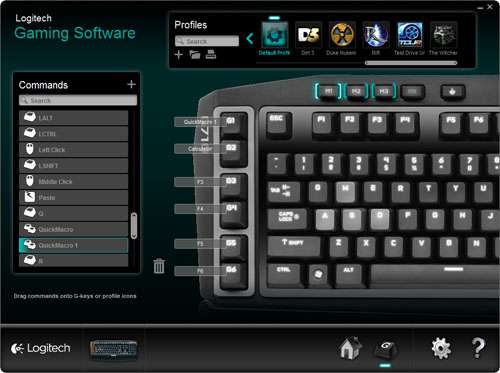 Another special use of the G keys is using them as shortcuts while at the desktop. I tend to use the Windows calculator multiple times a day, so setting a G key to quickly launch it saves me a lot of time over the course of a few weeks, or longer. It’s simple abilities like that, that help make a keyboard like this stand apart from the rest. While other keyboards could mimic a calculator launcher just fine, few, or none, offer as much flexibility as Logitech does here.

I admit that at first, I found the software to be a bit lackluster, but after a bit of use, my attitude about it turned around completely. It’s easy to use, and macros execute flawlessly. There’s not much to dislike.

I’ve covered most of my testing-related thoughts in other sections in the review, but in this quick section I wanted to see if the keyboard lived up to its anti-ghosting and rollover promises. Over the course of the time I’ve spent with the G710+ so far, I’ve played my favorite MMO, Asheron’s Call and a bit of Call of Duty: Modern Warfare 3. In addition, I’ve done quite a bit of both simple and tedious work, such as writing, juggling Excel files and dealt with all that working on a beta website requires.

So far, my experience has been extremely good, and I haven’t really got a single complaint. The keys are laid out just as I like them (important when I am so familiar with a given layout for Asheron’s Call), and generally, the keyboard has been a pleasure to use.

To test the multi-key capabilities, I simply pressed a bunch of keys at once, trying to space them out so that I affect different planes around the keyboard. In all of the tests, no keys dropped, although it’s hard to say for sure with the last one as that was the result of pushing down with my entire hand on the keyboard and its numpad – not exactly the most accurate way to test, but my hands are not square.

It’s safe to say that pushing multiple keys at once will never be an issue, even if you happen to have two people using the keyboard at once for some game that supports that style of play.