All of the devices I had were properly recognized and functioned correctly, with the exception of the Apple TV. There happened to be an Apple Hi-Fi near the Apple TV, so the One would confuse the two devices since all Apple products use the same signals.

After the Hi-Fi was removed, however, the Apple TV still refused to accept signals, even when it wasn’t paired with another remote. I scratched my head for a while and decided to solve the problem later. One day, it magically started working. I doubt this was an issue with the remote, but it’s still mysterious nonetheless.

When the programming was completed, I was able to do exactly what one might expect. For instance, to watch TV, all that had to be done was tap the “Watch TV” button in the activities menu and point the remote toward your components for a few seconds, and the remote would turn devices on if it needed to, switch video and audio inputs on the television and receiver, and put the TiVo in Live TV mode. If I wanted to watch a DVD or listen to music, the same procedure could be done. 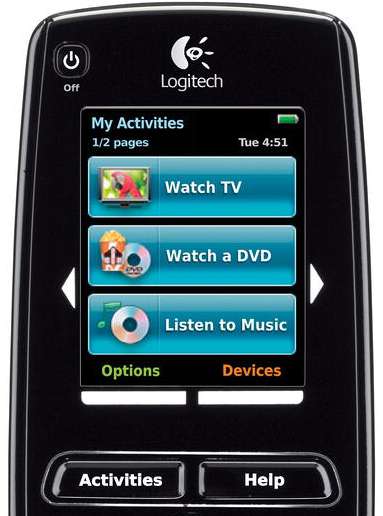 One of the nicer features is the ability to create custom activities, using whatever devices you may have. This must be done if the software fails to recognize how a certain device is used, or if you want to make shortcuts for frequently used tasks.

Even so, things certainly weren’t perfect, or even satisfactory in some cases. The remote can take a long time to setup if things don’t work properly. Every time a change is made, the One needs to be plugged in and updated, which takes a while. So, mundane tasks like Changing the icon or text on a button or adjusting the response time of a certain equipment can begin to add up.

The remote, like all Harmony remotes, occasionally had a problem staying in sync, and when an activity was selected, a component would fail to turn on or adjust properly. This was fixed by using the help button, which initiates a simple to use troubleshooting feature, but people buying the product wouldn’t want to deal with that on a weekly basis, if not more frequently.

I do take issue with the touch screen because of two major flaws I felt were overlooked by Logitech. The first one is the amount of pages certain devices can take up. The receiver, for example, has 17 pages of commands when it is selected in the device menu. Having to wade through over a dozen pages to find a certain feature is annoying, and the ability to get up and do it on the device is taken away, because the remote is more than likely to become out of sync. But, to combat this, these features can be re-arranged to an order you prefer, via the software.

The next one is a simple, annoying, and somewhat obvious issue: cleaning the touch screen. There is no way to turn the device off without having to take the battery, and no visible way to lock the touch screen. The One comes with its own cleaning cloth to wipe away fingerprints with, but having to turn it away every time and hope a signal isn’t sent to one of my devices is a little more on the annoying side than I would like to deal with.

The hardware itself is solid, except for some minor rattling, which I would rather not want to deal with for a product with this high a price tag. There were no issues with the buttons or design that I could mention, and the touch screen was sensitive enough to pick up presses the first time around.

The layout is something I prefer, but there will always be a degree of preference. Most of the buttons were easy to get to, but the odd shuffling between physical and touch sensitive buttons provided an awkward transition period. In the scheme of things, it won’t have much impact though, so in my view it’s excusable. 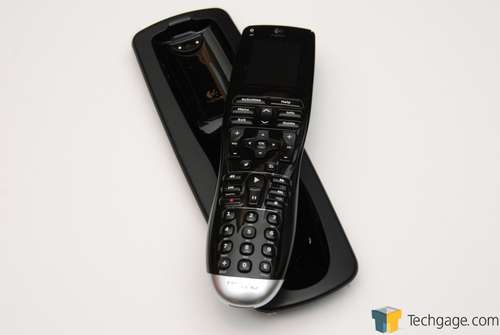 Even with the One’s faults, I would still recommend it. The odd problems I experienced during the setup stage was quickly subdued by the overall experience: the easy of use, convenience and simplicity. It helps to remember that even if you have a problem with programming, you’re only going to go through the ordeal once. Frequent trips will be made to Logitech’s software if you make any additions to your home theater setup or want to tweak a particular setting, but nothing too daunting should ever take place more than once, if at all.

The One would have received a perfect score if it wasn’t for it’s lengthy and downright erroneous setup process. This was most likely an isolated issue, but it’s something to keep in mind when you consider the fact that the problem wouldn’t exist if you were using another universal remote. The chance of error is still there, and it’s something to be aware of when purchasing the product. In the future, I would also like to see better Mac support, which is obviously alienating a segment of the market Logitech claims to support.

If you’re left wondering if the $250 price tag is worth the convenience, it would have to depend on your setup. If you’re only using a handful of products or an outdated setup, the money would probably be better off going somewhere else. But if you’ve already sunk thousands of dollars into a system that you want to make the most of, the cost is nothing worth complaining over for the perks allowed. The best part is that when compared to competitors models (and even Logitech’s own), the One proves to be a solid value.