by Jamie Fletcher on November 3, 2010 in Peripherals

Wireless mice offer a plethora of benefits to their users, but the most common complaint about them is the lack of battery-life, or the need to change the batteries at all. Logitech aims to make things a bit easier on people with its Marathon Mouse M705… a mouse that uses two AA batteries and lasts an entire three years. Yes, three years.

Logitech is no stranger to our site, as we have reviewed many of its products in the past. Things have been a little quiet recently, but that is about to change as we take one of its latest offerings for a test, the Marathon Mouse M705.

The M705 has a few interesting features under its belt, but the one that’ll grab most people’s attention is the 3 year battery life for an RF-based wireless mouse. No that was not a typo… I really did say 3 years!

How this was achieved will be explained later, but for now, I’ll run by its other key features. The M705 is an RF-based wireless, 1000 DPI laser mouse that uses Logitech’s trusted Unified (nano) receiver. It’s an 8 button design with a 4-way HyperScroll wheel.

Measuring at just 4.25 inches long, it’s a tad dainty, but not quite a portable scale. A light ergonomic shape catered towards right-handers proves comfortable despite being small in stature. The HyperScroll is effectively a free-moving scroll wheel with an optional lock to make it act like a normal scroll, providing feedback and a click for each partial rotation. When the lock is disabled via the top button, the wheel becomes very loose and capable of scrolling at exceptional speed. 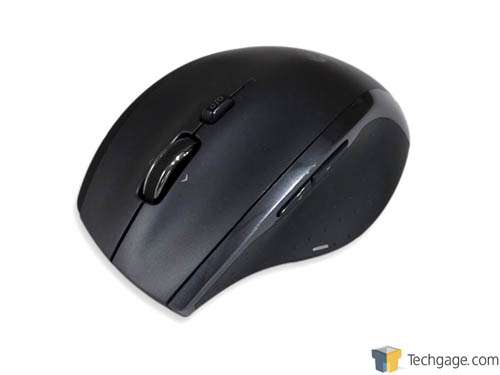 This feature did throw me at first. As it’s extremely sensitive, the lightest flick can send you half way up a page with plenty of energy left to keep turning. As a quick test, I flicked the wheel and timed it with a stopwatch. It took a full 30 seconds to stop spinning – it has very low friction. 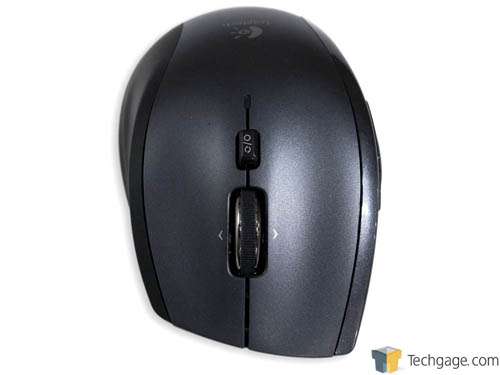 To begin with, I really thought this HyperScroll to be a gimmick, it was just too loose and imprecise to be practical. Yet the more I use it, the more it’s grown on me. Long forum threads and articles can be scrolled through quickly and easily, much faster than using a normal scroll and less effort than using the sidebar. There can still be some accidental drift and scrolling with fast mouse movement, so you may want to get in a habit of switching the lock back on.

The scroll is 4-way and can be pushed to either side for side scrolling. This requires some effort, but not as much as the ErgoMotion. I’m still not a fan of side-scroll buttons due to the unnatural way they need to be activated (try and push your own scroll wheel to the left or right without pushing the other buttons). There is some good news though, all buttons are programmable with the SetPoint Software.