by Rob Williams on January 10, 2006 in Peripherals

There’s no shortage of keyboards and mice to choose from when you are looking for a purchase. Today we are taking a look at a combo that should prove perfect for media buffs; even better if you have an HTPC!

When looking to purchase any type of hardware, there seems to be a common problem: Too much selection! The peripheral mark is certainly not excluded from this. Simply taking a look at Logitechs own products page can be overwhelming if you are looking for a keyboard or mouse. We have taken in-depth looks at numerous Logitech products to date and will be doing so again today.

I took a look at the MX3100 combo last May, which included the MX1000 laser mouse. The MX3100 is a very similar set, although it includes an MX600 mouse instead. No need to worry though, as this mouse also has a frickin’ laser.

It seems that corded mice and keyboards are being phased out pretty quickly. This is not a bad thing by any stretch, because wireless technology can help make our lives easier. I have to admit though, that I can’t stand gaming with a wireless mouse, but it’s certainly nice not tripping over a cord during some hardcore spreadsheet action. Of course, alongside wireless connectivity, we also want lots of functionality.

The set we are looking at today is geared toward the media buff… and it shows. If you have an HTPC, then this just may be the combo for you.

Packaging is not something that Logitech changes too often, but that’s because they don’t need to. After tearing open the package, you see everything you expect, including manuals and CD’s. One important thing to note is that Logitech is kind enough to include two sets of AA Duracell batteries so that you can be up and running in a flash. Nothing sucks more than getting home and not having any batteries for the new ‘toy’, so kudos to Logitech for including those. 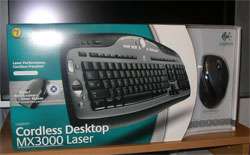 The USB base that is included with this set is unique. It is oddly shaped, so it’s hard to position is correctly. Picture a piece of plastic that’s bent into a 90° angle. This should be ok, but the cord that runs from it is thick enough to become a pain. Simply, it’s hard to position the base so that it looks nice. I just got fed up and let it hang over the side of the PC ;)

One benefit of the odd base though, is that the keyboard and mouse are both ‘pre-connected’ so that once you plug them in, you are good to go. Another nice addition are three green LED lights on top of the base that represent the status of Caps Lock, Num Lock and the F Function key.

The software included with the set are the latest SetPoint drivers and MediaLife, which is similar to Microsofts Media Center. Overall, it’s a great package and the addition of batteries is extremely welcomed.