Looking for a quality cordless Keyboard/Mouse set? Logitech released the MX3100 a few months back, which includes the ultra precise MX1000 laser mouse, in addition to a keyboard with tons of functionality. Read on to see if the MX3100 is all it’s cracked up to be.


Oh, where to begin on the functionality. The keyboard has a total of 135 buttons, some of which can be used in different ways. Starting out on the basic functionality. The MX3000 uses the standard keyboard layout, except for the Home/End key area. Instead of the usual six buttons, they have removed the Scroll Lock button entirely, and made the Delete key longer, as you can see in the pictures.

At first, it felt weird getting used to.. but it didn’t take long. I had to change some key configurations in some of my games to reflect the change, but I adapted extremely quickly, and it feels completely natural. You may ask, “Why did they remove the Scroll Lock button?”. To get into that, we’ll get into the F Mode options.

Many keyboards nowadays have this built in, where the F1 – F12 keys will perform different options. IE: Pushing F8 will save your current document. This can be turned on and off via the F Mode button. If you have the F Mode on, the Insert key will act as the Scroll Lock. The other F keys perform such miscellaneous tasks like undo, redo and even can open Word/Excel/Power Point. 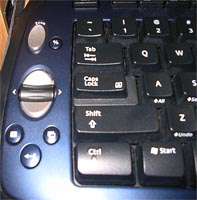 To the right of the F keys, you will find more functionality. Need a calculator? Push the calculator button! Beside this, you can push a button to put your computer to sleep. There are also buttons to open your default Mail client, MSN Messenger, MSN Status and even one to activate your web cam.

In the center/top of they keyboard, is an array of Multi-Media based keys. The large round button spins around and controls the volume. The usual Forward/Pause/Play buttons are here as well. There is even an Eject button, which will eject any current media.

There’s a Remote Media Player button, will launch the MediaLife software, included on the CD-Rom. There are even Rip/Burn buttons here, which coincide with Windows Media Player. Lastly, you can find a Mute button, and three Playlist buttons, which will Save your current playlist, or load one, if there’s currently one saved.