After plugging the receiver into the PC, Windows picked up on it immediately and was able to use the mouse in less than 10 seconds. Of course, for any of the advanced features to work properly, the SetPoint 3.1 software had to be installed. Though I received an older version of the software with the mouse, I was supplied with a newer version also to take care of lingering bugs in the included version. Here is what you can expect in way of setup: 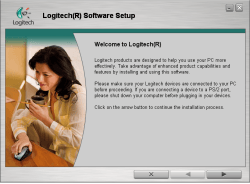 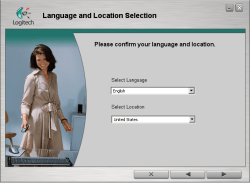 If you have other Logitech peripherals, such as a keyboard, you can install drivers for those at the same time. You also run into the choice of installing the Desktop Messenger which allows you quick access to the latest software/news updates. We can see that the girl in the picture is incredibly satisfied with it though, and maybe even know why there is a G in Logitech. 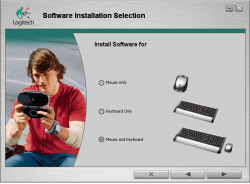 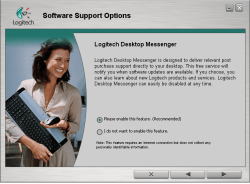 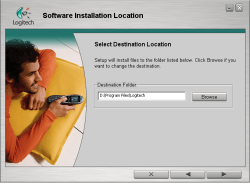 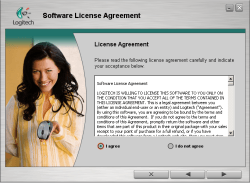 Last but not least, we see that the software install takes around 42MB of space. Seems like a decent amount for mouse software, but it does a lot so no points against it. Lastly, we are shown by a slickster that Logitech sets also double as a guitar in a pinch. 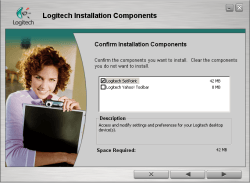 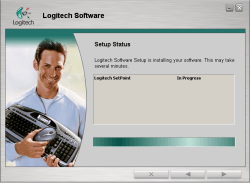 Overall, the entire installation was easy as one would expect. After a quick reboot, it was time to do some configuration. The SetPoint software cannot be underestimated… it’s a powerful tool. It gives complete control over most aspects so that you, in the end, get the mouse that you want.

The first config screen allows you to configure all of the buttons, so if you don’t like the default value for one, you can change it. After some configuration changes, I was unable to get the the thumb button or search button to function within a game. 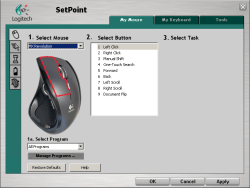 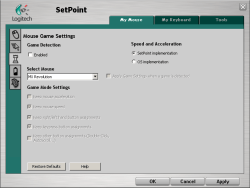 The next screen may prove to be one of the most useful because it allows you to keep an eye on the battery status. Unlike the MX1000, here we can actually see how many days (approximate) are left before we need a recharge. The final screen allows you to customize the scroll wheel to your liking. In addition, you can create profiles for various applications. 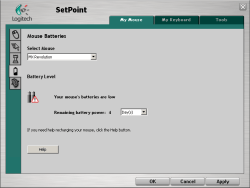 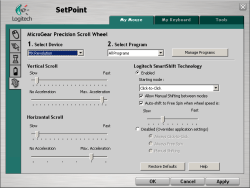 If you are interested in using the mouse in Linux, you shouldn’t run into any issues. Of course though, you will lack some functionality. After plugging the receiver into a USB port, I was able to use the mouse almost instantly. The super fast scrolling works just fine, which is a bonus since it’s a selling point of the product. As you’d expect, the search button does not function because it’s tied completely to the SetPoint software which does not have a version available for Linux.

The thumb wheel does not function either, in any shape or form. The two left thumb buttons do however. The first acts as a right-click would, so you would basically have two right-click buttons. The second acts as the scroll wheel would if it was pushed down. For instance, if you hover over a link in Firefox and push the second thumb button down, the link opens in a new tab. Or, if you are in a webpage and click it, it will turn into a cursor that follows your cursor, ie: click and move your mouse up and down to scroll the page.

For those interested, the output of cat /proc/bus/input/devices is found to the right, and the result of lsusb -vv can be found here. In the end… the base functionality is what you would expect. With some Xorg configuration tweaks, you may be able to get the other buttons to function, however I rarely use them so I don’t intend to figure it out. Is the mouse worth it for a Linux user though? Depends on two things… how comfortable do you want to be when using a mouse, and is the special scroll wheel that important to you? I await the day when Logitech will support their products in Linux…