After using this mouse for the past few days, I can say that I enjoy it far more than I ever did the MX1000. Though the scroll wheel may not sound that impressive on text, I actually find myself now relying on it with large documents. I even take advantage of the super fast scrolling on websites… it just helps me get to where I need to be quicker.

You would think with the speed of the wheel that it would be audible, but it’s not in the least. You will hear it only if you put your ear straight up to it, but then it would still be as audible as any other scroll wheel. Another thing to note is that even though the wheel is capable of spinning for up to seven seconds, it takes only a light tap to stop it. Logitech notes they have put a lot into the thought process of the wheel, and it shows.

The only real thing I disliked about the MX1000 was the bulkiness… it felt like holding a loaf of bread. This is not problem I feel at all with the new mouse. It’s sleeker, like the G7, so it doesn’t feel too large at all while holding it. Overall, this is an extremely comfortable mouse. I would not be nuts to say that it’s the most comfortable I have ever used.

All of the buttons are well placed, including the two side ones. The thumb wheel and search button are the only two that will require you to move a few fingers off to push. I can’t say they are improperly placed though. Anywhere else and I would likely complain about it.

One thing that did strike me odd, was the fact that I could no longer click down the wheel button to open up link in Firefox in a new tab. Logitech told me what I needed to do though, and it makes quite a bit of sense. Check out the shot below:

There’s an option here, “Allow Manual Shifting”, and while we are not driving here, this is an option you will want to uncheck if you want the same functionality as mentioned above. You will also need to go back to the mouse settings and configure the wheel as “General Button” so that applications will treat it like a normal wheel. After you do this, it will limit the wheel to a single mode… either the default or free-spin. All along, I thought pushing down to select the scroll wheel mode was hardware related, but it’s definitely the software doing the decision making.

Generally speaking, if you enjoyed the MX1000, G5, G7 or any other similar mice, you will love the way the Revolution feels. I admit though, this is not a mouse for gaming. However, it should prove good enough if it’s the only mouse you have handy. Here are a couple reasons I feel that this shouldn’t be used as a gaming mouse unless you can help it:

That being said, this is not a gaming mouse or marketed as such. This is a desktop mouse that caters to all of your daily computing needs. As such, this mouse is the best I’ve ever used. For gaming though, I will definitely be sticking to my MX518. 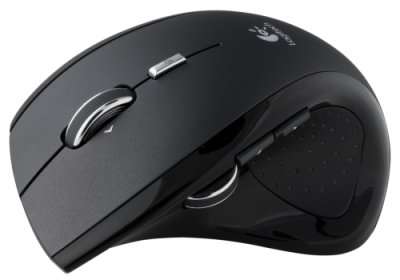 In the end, if you are looking for a new mouse that has a lot to offer, then you will want to check out the MX Revolution. I do not find the Revolution as ‘revolutionary’ as the MX1000 was back in the day, but the important thing is that they have taken almost every aspect of that mouse into consideration and fixed/updated it. After it’s all said and done, the Revolution is a great mouse that I personally don’t want to go without. Once you use the free-spin scroll wheel and adjust to the great form fitting design, you will not want to go back to anything else. I am awarding the MX Revolution a 9 out of 10 and our Editors Choice award.