Logitech recently announced at this months CeBIT, that new Headsets were on the horizon. We are reviewing their top model, the Premium USB Headset 350, which they promise to provide superior input and output sound, and great comfort. How does it do? Check out our review.


The Premium USB Headset 350 is Logitech’s cream of the crop model. It’s goal is to provide you the best overall sound quality, comfort, and usability. Just looking at the Headset, you can tell it’s a good quality product. The construction and style is great; definitely a professional looking Headset.

Now, I have not used a USB based Headset until now, so I was unaware exactly how they worked. That being said, I was surprised to see that no CD-Rom came with it.. I thought I was lost. To my surprise, just plugging in the Headset to the USB port, detected and installed it within seconds. This Plug and Play requires at least Windows 98SE, or Mac OS X+. Once installed, the Headset shows up in your Sounds and Audio Devices as ‘Logitech USB Headset’. This means, that you don’t even need a Sound Card to use the headset, as it’s ‘built-in’. 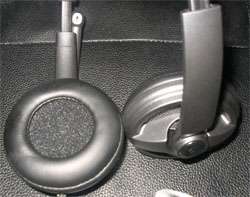 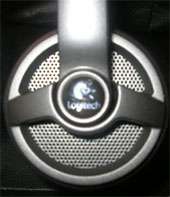 So now I was ready to test them out. I was immediately impressed with how comfortable they were to wear. They were more comfortable than I expected though. Of course, comfort is not everything, sound is. So I went into the Voice tab of the Sound and Audio Devices and configured the volumes to my liking.

The program I used to test the recording is called Sound Recorder. You can get your own copy for free here: %SystemRoot%/System32/sndrec32.exe

I recorded a line of text, and played it back. The sound played back crystal clear.. I was very impressed. This also showed me how good the noise cancelling worked. Intrigued, I decided to see just how effective the cancelling is. So I turned on my television, and kept it at the normal listening volume. 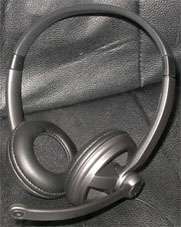 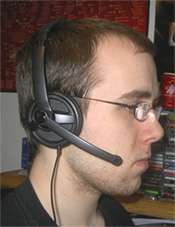 I recorded myself again, and was surprised to not hear the television in the background at all. The TV is literally 4 feet away from me, and I could hear it very clear even with the headphones on. I also tested it by playing music out of my Laptops built in speaker.. 2 feet away. I played some dance song, which I will leave nameless so as to protect myself from laughter. When played back, I could hear the song in the background. This could also be because the laptop is much closer to me than the TV, as it sits directly next to my computer monitor. If you are using the headset, you wouldn’t be playing music so close, either way. I say that the noise cancelling worked quite well.