At the 2007 CES, one product announcement set the PC audio industry on its ear. That announcement was made by Razer, who demonstrated an intriguing, oddly-styled 2.1 powered speaker system co-developed with THX, Ltd and touting a host of innovative technologies as well as THX certification. Another PC audio product launch at the 2007 CES that received comparatively less fanfare, and generated a lesser amount of industry buzz, was Logitech’s new X-240 speaker system. 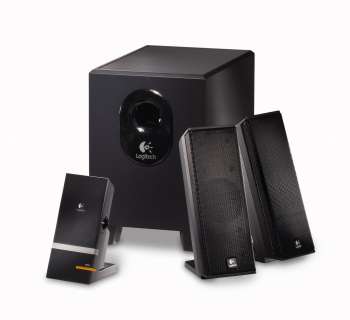 Of course, for a 2.1 loudspeaker setup that can be had for less than $50, there’s usually not that much to be excited about. What makes the Logitech product announcement of special interest, however, is the fact that the new model belongs to Logitech’s X-series speakers, known for exceeding the status quo in price-to-performance ratio with the $99 X-540 5.1 speaker system. Could the new X-240 speakers be able to manage the same feat in the $50 price category?

What really sets the X-240 speakers apart from the competition in the $50 price bracket is a special design for the speakers’ wired remote which integrates a nifty little stand that can accommodate several types of portable music players, including Apple’s iPod. Because of this feature, the X-240 are called “Music Center” speakers, though they’re still primarily intended as speakers for your PC.

A few weeks ago, Logitech was kind enough to send a sample of the new X-240 system for evaluation. What follows is an in-depth look at the system’s features and design, and we’ll also see if Logitech can manage the same status-quo-shattering performance from this low-priced 2.1 system.