To test out the X-540s, I focused on a few areas. I primarily used them for gaming on my PC and XBOX, but also listened to music though my PC, iPod and finally watched pieces of movies. My ultimate goal is to get the broadest ranged of use out of the speakers and relay my results in this review. In the testing, I used an Audigy ZS2.

For starters, I played a few different games to get an all around feel for the sound quality of the speakers. I started off with Counter Strike: Source as it is easily one of my favorite games for the PC at this moment. From there, I played some Rise of Legends and then Battlefield 2.

Each of these games has their own unique sounds to them. The main game I used was BF2. The surround sound qualities of it make is a great game to test out audio equipment. The rumbling of the tanks and the high whines of the planes all sounded great and added a bit of realism to the game itself.

When we get to movies, I decided to watch Die Another Day. There is something about Bond that makes me feel more like a man’. or less of one if a comparison is being made, but whatever. The sounds of the movie, be it high or low came though clear and crisp. The action scenes in the movie such as the car chase on the ice at the end of the movie sounded incredible.

The final testing I did was with the XBOX 360. The 360 hooks up easily to the X-540 with the provided component audio cable. This allowed me to play CoD II on my Dell 2407 LCD as well as use the audio of the X-540 to hear the action. With the second picture, all I want you to know is that you should never drop acetone on anything. This includes your XBOX 360s power supply. 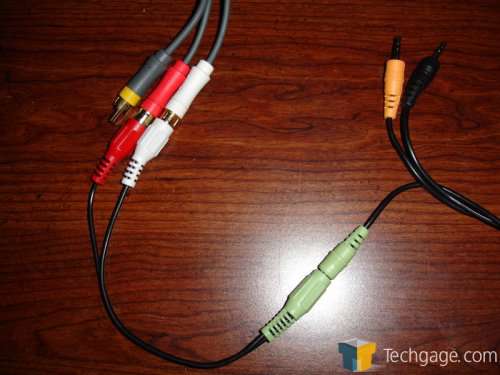 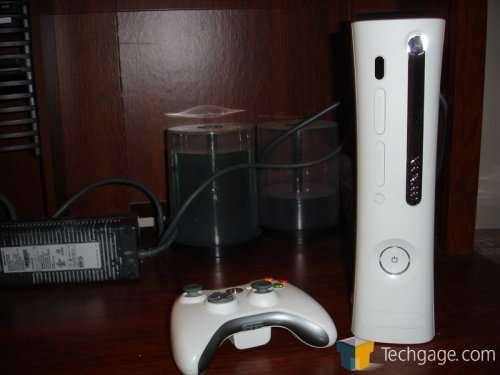 The audio of the 360 sounded far better than the speakers on my television and with the 720p settings of the Dell, the experience was awesome to say the least. With the hi-def components plugged into the back of the monitor, I simply used the provided adapter to run the audio component plugs into the X-540. From there, it was only a matter of turning up the volume or turning it down.

The X-540 5.1 speaker system from Logitech does not disappoint. While it isn’t as loud as my home stereo system, the entire system is smaller and costs way less than my receiver alone, let alone everything else. The whole goal of the X-540 is not to replace a home theater stereo, but rather to be an affordable PC stereo system that sounds good and doesn’t take up a lot of space. I have spent the better part of the last 2 weeks with the X-540 speakers on my desk and in that time, I have appreciated their sound as well as their build quality. They are a sturdy bunch indeed.

The included adapter can be picked up at any local Radio Shack but the fact that it’s included really makes the X-540 system that much more versatile. Having my XBOX running though the speakers was a nice addition and being able to plug my iPod into the remote’s headphone jack was nice as well. With all these positives, we can’t loose sight of the downsides of this system as well. I personally do not understand how Logitech can justify leaving the subwoofer’s speaker unprotected. While this would be perfectly fine almost all of the time, it is almost inviting something bad to happen.

Speakers are not extremely tough and one good boot could do it in. I suppose I could also pick apart the overall sound of the X-540 but that really isn’t that fair. I personally have not heard anything in this price range, currently going for around $89.99 (US), that sounds as good as these do. For a sub 100 dollar set of 5.1 speakers, the X-540 has my recommendation. Because of the experience that I had with the X-540, and factoring in the price they are selling for, I can happily hand Logitech and their X-540s an 8 out of 10.