Logitech unveiled their Z Cinéma speaker system at this year’s CES, to plenty of fanfare. The system blends a refined two-way satellite design with a robust, powerful subwoofer. We take the latest high performance Z-series PC speaker system for a spin, and find lots of cause for excitement.

Among the major manufacturers of PC speakers, one particular market segment has been eerily silent for about the last year – large high-end multichannel speaker systems. Klipsch has already headed for the door, and new high-end systems from the big-name manufacturers at the last two CES events have been of the 2.1 variety.

That trend led me to comment in our forum in September 2007 that “customers are more interested in having a pair of very high-quality speakers instead of five speakers of middling quality for the same price”, and attributed this shift in focus to the failure of the “Media Center PC” model, which caused enthusiasts to take the PC into the home theater (giving birth to the HTPC phenomenon), instead of building the home theater around the PC.

The first example of this trend came at the 2007 CES, when Razer and THX unveiled their otherworldly Mako 2.1-channel speaker system, a $349 2.1-channel system that was actually designed in partnership with THX Ltd. The second, however, came at this year’s CES, when Logitech unveiled their newest high-performance Z-series PC speaker system, the Z Cinéma.

The Z Cinéma puts a twist on the typical 2.1-channel system, one which I suggested in late 2006 with my first review – that the addition of a virtual-surround algorithm like Dolby Virtual Speaker or SRS TruSurround could add a new dimension to the performance of traditional 2.1-channel speaker systems, eliminating the need for rear speakers completely. 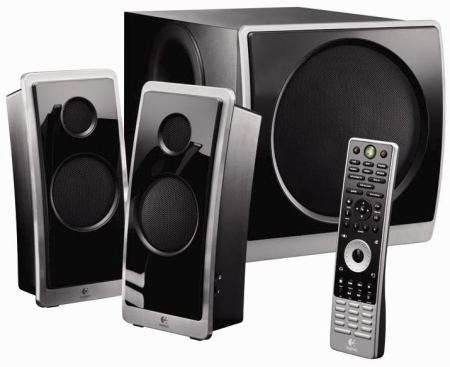 In the case of the Z Cinéma system SRS Labs’ TruSurround HD algorithm is used to synthesize an encircling surround sound experience by relying on psychoacoustics – that is, taking advantage of the way our ears and brain perceive the directionality of sound to create the impression of speakers where there are none.

The Z Cinéma system pairs this technology with two improved two-way satellite speakers similar to the design of the Z Cinéma system, and a monstrous subwoofer. Finally, the system also includes a remote with complete Windows Media Center functionality – the infrared receiver in the speakers can double as the PC’s own infrared receiver. All this is controlled and fed – digitally – through a single USB link to the host machine.

Logitech graciously provided a sample of their newest high-performance speaker system, and in this article, I’ll put it to the test. Does this pairing of virtual-surround technology with a 2.1-channel speaker system make for a compelling surround sound experience?