Sound. To a gamer it’s the hinge pin of gaming. You need it to survive and with the advent of multi channel sound solutions there’s no excuse for living with old school 2.0 setups, even when you’re lanning or trying to game without disturbing others. Today we take a look at a set of headphones that are 5.1 and feature their own built in amp and sound decoding.

LTB, Listen to Believe as they’re otherwise known is a new player in the PC sound game. They also offer home theater sound solutions but we’re not covering those here since we’re focusing on their USB MG51 Magnum 5.1 USB headset.

With a dynamic Plug & Play interface, the new LTB-MG51-USB headphone system provides quick connectivity for Movie and gaming enthusiasts. With support for full HRTF 3D and EAX 2.0, the Magnum 5.1 offers a great way to get True 5.1 from today’s Notebook computers that most often can only produce 2.0 Audio.

The LTB-MG51-USB is a must for serious Gamers and for Multi-media PC’s. The Magnum 5.1 system with it’s Built-In MIC is ideal for VOIP, Team gaming and includes a stereo adaptor for MP3 players and stereo listening. 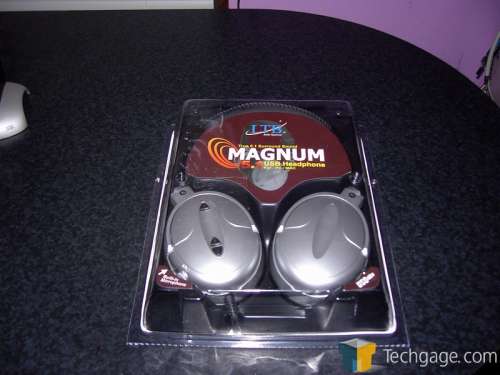 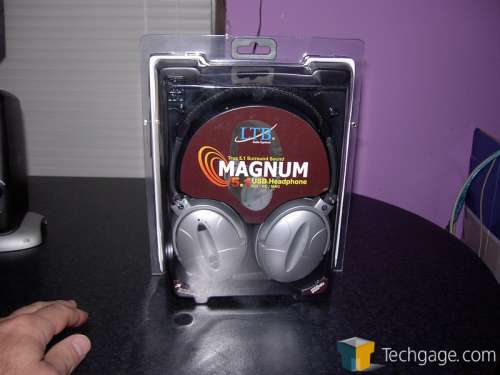 The Magnum 5.1 is a very svelte 5.1 setup, they’re no bigger than most two channel units. In fact they’re considerably smaller than the Everglide S-500 headset I reviewed a while back and they were a 2.0 set without amplification and sound. They’re also smaller than most every 5.1 setup on the market, aside from others marketed by LTB.

The packaging takes less time than the type that’s "welded" along the side seams owing to the fact that LTB kindly decided to use rivets to fasten the edges together. This is nice in that if you’re only using the Magnum 5.1 to lan on occasion you can save the packaging (after carefully opening it) to store the Magnum’s in when they’re not in use. 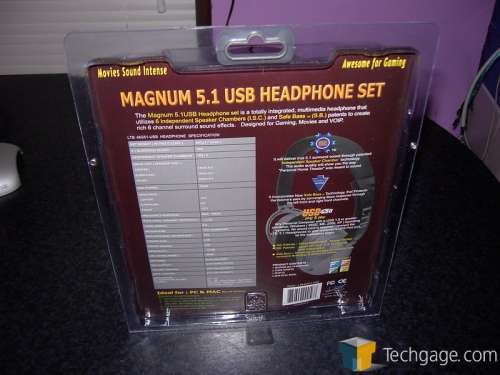 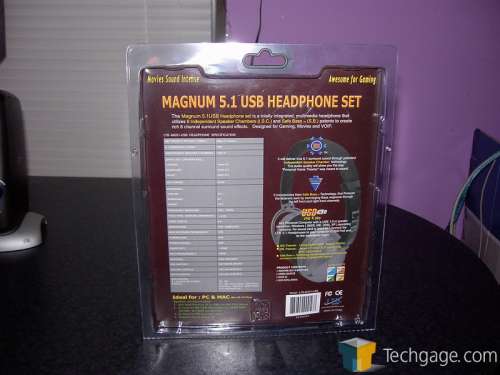 The rear of the packaging gives you another look at the specs of the Magnum 5.1. 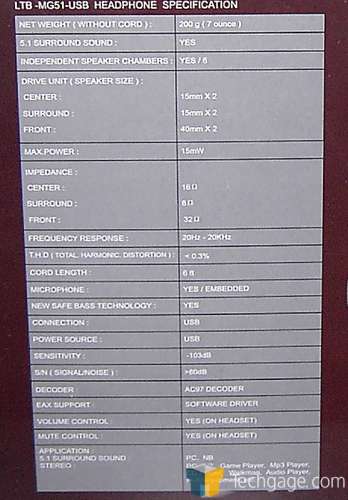 Note that they don’t list SPL levels for all channels driven at the rated THD. The frequency response is listed as 20hz to 20Khz, I’m not sure if that’s the ability of the amp, or the decoder or both but the headphones certainly are incapable of hitting 20hz. Possibly 40hz and certainly 50hz but not 20hz but I’ll get into that in a bit. 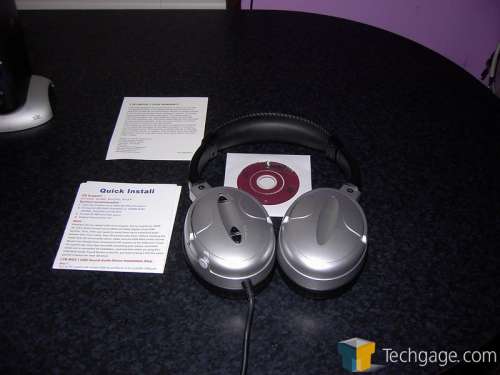 Out of the package we see that the Magnum comes packaged with a driver mini CD, quick install guide, warranty card and there’s a USB to 1/8" mini stereo jack adaptor not pictured here. Don’t fret I do have a shot of it with the headset in a bit. 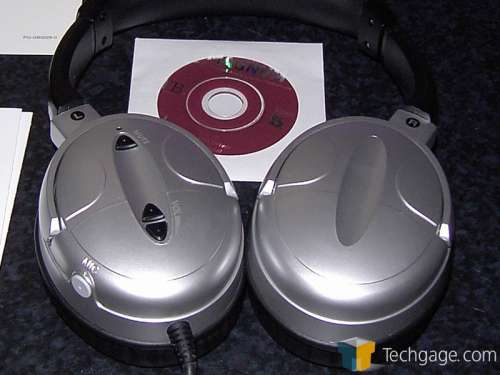 A closer look at the Magnum reveals the volume and mute buttons located on the left ear cup along with the mic. Yes, that little rubber looking grommet is the mic. Surprisingly though it does a pretty decent job of picking up your voice. It’s not as efficient as if it was in front of your gob but for something mounted on your cheek it’s pretty impressive.

One thing to remember is that with this configuration for the mic, anything that’s going on in the background is quite likely to be picked up by anyone you’re gaming against if you’re using the mic in game so you might need to mute the TV or radio or risk getting kicked/banned from the server for annoying people with a constant stream of background noise. 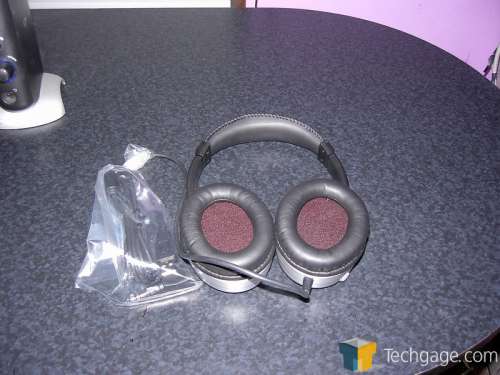 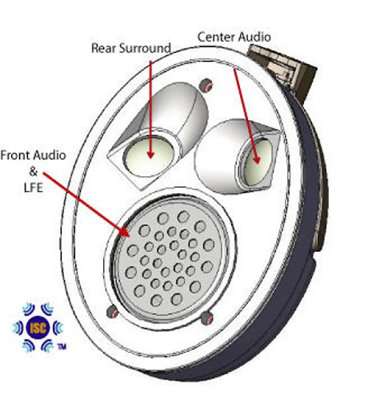 The driver for the front audio also covers the LFE (subwoofer) duties for the left, right and center channels. Yes, you read correctly, there is no low frequency information for the rear speakers. I’ll get into how this affects you as a user here in a bit. 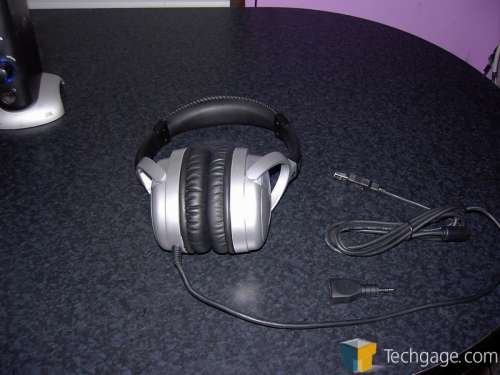 Here’s a peek at the cord and the aforementioned USB to stereo mini-jack adapter. The cord is fairly long at 2 meters (6 feet 4 inches) to the USB jack but if you don’t have front USB ports (or one open, like me) you’ll want to get an extension cable. This will allow you to have some freedom of movement when wearing the Magnums and also have easy access to unplug them because when they’re plugged in they bypass your in PC sound card or onboard sound.

Granted, you can switch between the sound sources in audio properties but it’s a pain in the posterior and (I don’t know why) the volume level indicator for Window’s native on screen display won’t work with the Magnum’s installed.

I can’t say how the Magnum 5.1’s sound using the supplied adapter because it would not plug into the headphone port on my trusty Logitech Z-560’s. Plus I’m more focused on their 5.1 capabilities so the 2.0 only capabilities of the Magnums using the converter is of little consequence to me or anyone else looking for 5.1 headphones.

Just bear in mind that if you want to use the Magnums for music listening (let’s say) with your home stereo and you’ve got a recessed audio jack on it you’ll need to use something to extend that jack outwards. Something like a 10′ extension cable would be ideal for curing that.