Sound. To a gamer it’s the hinge pin of gaming. You need it to survive and with the advent of multi channel sound solutions there’s no excuse for living with old school 2.0 setups, even when you’re lanning or trying to game without disturbing others. Today we take a look at a set of headphones that are 5.1 and feature their own built in amp and sound decoding.

Since this is a USB headset there’s something you normally associate with headphones… software. Oddly enough the software show eight channels. The hardware in the Magnums is based on a C-Media chipset so I’m assuming that the chipset is capable of 7.1 audio. I’d like to make a point about the software. When I first got the Magnum 5.1’s I attempted to install the drivers on the mini CD. No go. 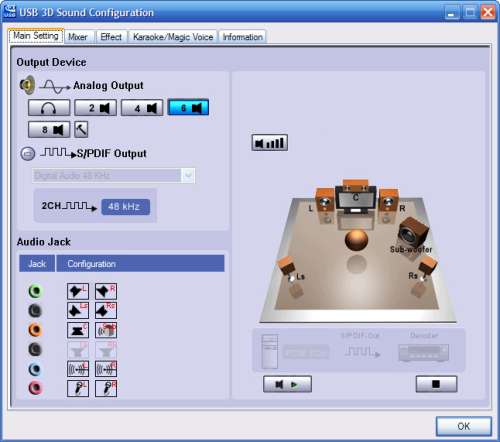 I contacted LTB tech support and they pointed me to the software downloads and the only software was for the 5.1 USB headset the Magnums replaced. It worked, sort of. It had some strange issues though so I contacted them again and they told me that the entire batch of Magnums that mine was from had come with FUBAR driver CD’s so the driver’s were being put up on the site.

I downloaded the new driver and it worked fine. Some time has transpired since then and I’m sure that the latest batches of Magnums have working CD’s but if you’re reading this since you have a set with a borked driver disk and you wanted to see if I had that issue then, yes I did. Happily though if you’ll go to LTB’s site and hit the support button you’ll be able to navigate to their download section and get the working drivers. 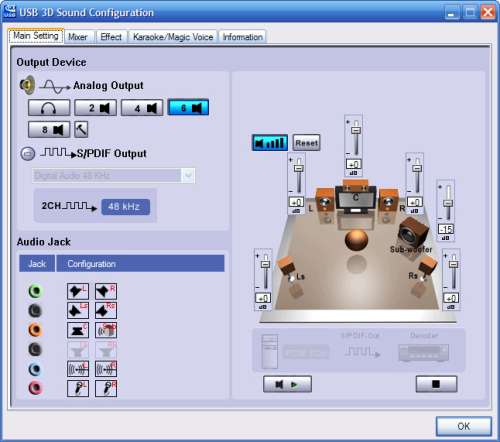 Clicking on the speaker volume button brings up the levels for the individual channels. You can adjust a slider then click the speaker below or beside the slider to hear how it sounds. If you notice I have the sub down 15db below the rest of the channels. This is because the "sub" is on the main channels and it doesn’t really add quality bas, it just makes it sound boomy. Remember when I said that there was no way that the Magnums could do 20hz? I’ll show you how I came to this conclusion right after this next picture. 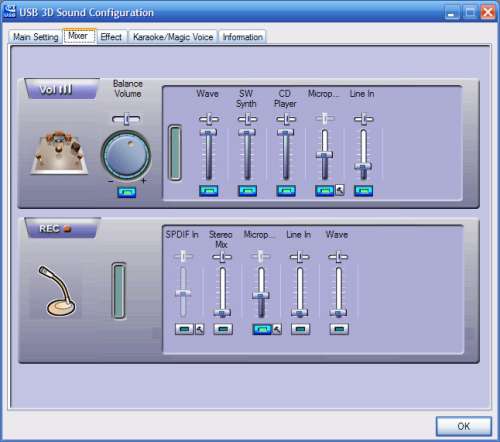 Here’s the mixer, pretty typical but I found that the mic picks up ambient room sound well enough that I can use it to listen to the TV while I game :-) 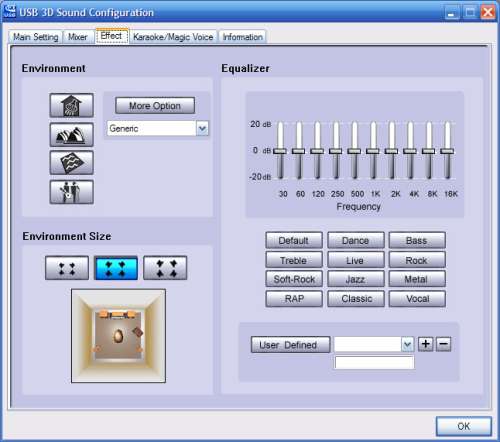 And here’s where I’ll cover the output of low bass on the Magnums. I discovered (by listening to music) that sliding the 30hz slider did nothing when moving to the + range aside from causing the drivers to distort as they attempted to recreate the range of frequencies it affects. Lowering the slider to the – side had a very slight effect on sound but I think it’s more due to the slope of the filter than from losing the 30hz information. In other words there was little discernable bass boost or cut with that slider, there was distortion from the drivers trying to cover the boosted output but that was about it.

60hz on the other hand did do something when boosted so I’m basing my "40 or 50hz" cutoff on that. The effects are the same as I’ve covered on other C-Media based reviews. Room size effects and ambient environments. As in those other reviews, the effects are too "wet" to be of any real use. 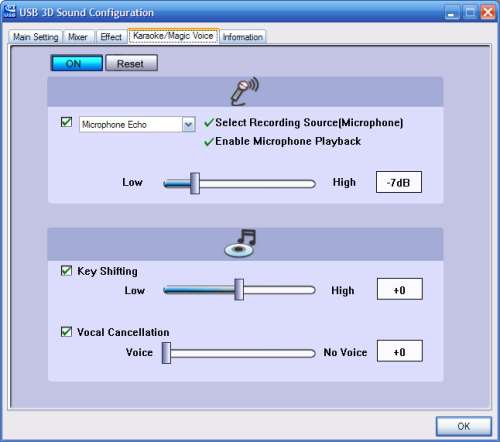 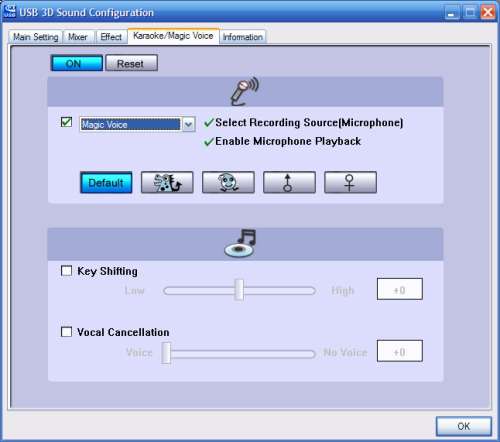 The next tab brings up magic voice/echo for the mic and key shifting and voice cancellation for playback sources. All four fall into the category of gimmickry and are not much use aside from two or three minutes of entertainment experimenting with them. 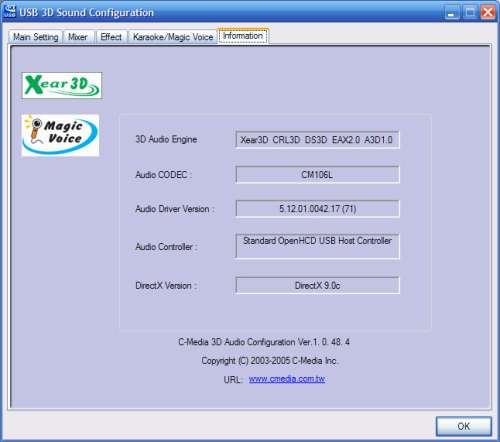 Now that I’ve got these things out of the way let’s get down to brass tacks. How does the Magnum perform?

I tested the Magnum 5.1 set with Call of Duty 2 and Delta Force: Blackhawk Down for gaming. For movie listening I watched Harry Potter and he Goblet of Fire (the crowd scenes at the Quiditch match are great for surround information) and I listened to a variety of music to see how they fared.

During gaming I found an oddity that I really disliked. There is no bass information from the rear channels sent to the drivers for the front. It’s *sort of* useful in that you can tell if something is happening behind you because it sounds like you’re hearing it coming from a tin can. There’s no boom from grenades or RPG explosions, it’s just a clanking sound. Talk about shattering any illusions of reality.

The forward information from the left and right speakers sounds realistic as does the center channel information (aside from the lack of deep bass) but the rear channels, that’s the sticking point. I contacted LTB about this and they said it’s intentional. Yep, you read correctly, intentional. It’s a "feature" built into the headphones to prevent the listener from being exposed to "potentially (ear) damaging volume levels".

In other words they’re trying to cover their asses in case someone throws common sense to the winds and listens to these headphones at full volume for hours on end and ends up hearing loss. It’s a load of tripe if you ask me, this is a major drawback for these headphones.

After my disappointing encounter with gaming I reluctantly fired up HP&tGoF and set about listening to the crowd scene at the Quiditch match. Surprisingly it sounded pretty good. I never was able to locate rear channel information from a lack of bass,instead it sounded fairly natural and the sound was very large.

I attribute this to the rear channels in movies not being recorded with tons of low frequency information. Instead that information is sent to the LFE channel by the Dolby 5.1 channel steering mechanism. I just wish that video games utilized this same realtime sound steering rather than sending full range information to all the channels.

I did a bit of listening to a few different types of music. I listen to stuff that’s generally pretty hard core. A lot of metal, hard alternative and hard techno with a few lighter types thrown in for flavor. The Magnums actually did pretty well as far as the thrashy stuff was concerned.

I listened to some Overkill (Stone Cold Jesus, Bold Faced Pagan Stomp, 80 Cycles) and it sounded pretty good aside from lacking authority on the lower end. Now on the flipside Hollow by Pantera sounded, well, a little hollow. Not surprising since it has a lot of really deep bass so the lack of that roundness was readily apparent. Overall the Magnum 5.1 gives an acceptable stereo listening experience on most types of music. The volumes attainable are satisfying but not earth shattering.

LTB tries to position the Magnum 5.1 headset as a gaming USB headset with the enthusiast in mind but as I found out it’s a decent multimedia headset with light gaming capabilities. If you want a headset to do some movie watching and voice chatting with a bit of gaming thrown in the Magnum 5.1’s are worth a look but if you want a competent gaming headset I’d advise you to look elsewhere. Considering the jumping off point for the Magnum 5.1’s (around $56) you’d be better served looking into the Zalman ZM-RS6F+M 5.1 headset for anywhere from $10 to $15 less depending upon where you look.

With that said I’m awarding the LTB MG51Magnum 5.1 USB headphones a 5/10 simply for the fact that they can come in handy for gamers that game on laptops. For serious gamers doing their gaming on desktops with 5.1 analog outputs these are really a waste of time and money.