by Rob Williams on September 7, 2020 in Graphics & Displays, Processors

MAGIX’s Vegas Pro 18 has recently launched, so we’ve decided to not just pay it a visit, but throw a dozen or so CPUs and GPUs at it, and see where strengths from each vendor pop up. In addition to the encode and playback tests we’ve run before, we’re adding three new tests to this round, each revolving around one of the new FX filters: Colorize, Style Transfer, and Black Bar Fill.

MAGIX released the latest version of its popular Vegas Pro movie editor last month, and as usual, there are a number of new features that make for an alluring upgrade. As has become a bit of a tradition here, we’re taking a fresh look at Vegas Pro performance with the new version 18, focusing on both processors and graphics cards.

Our included tests this go around follow in the footsteps of those used for VP17, but they’ve been once again gone over to make sure they’re using the hardware well, and deliver relevant results. On that note, a few new tests have also been added, taking advantage of the new Colorization and Style Transfer AI FX in our CPU testing, and Black Bar Fill in our GPU testing. 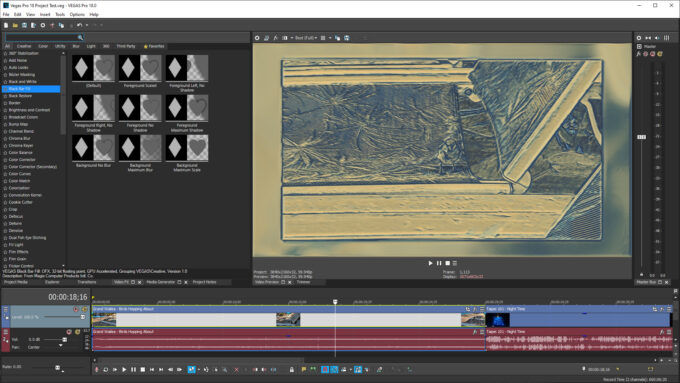 Both of the AI FX added to VP18 will offer varied results, as you’d likely expect from artificial intelligence. Style Transfer offers you a number of classic styles to apply to your video, such as inspirations from van Gogh and Picasso, while Colorize adds what will hopefully be believable coloring to your black-and-white videos. Black Bar Fill will add a frame around a video that mirrors a blurred portion of the frame (seen above with Style Transfer added).

It’s worth noting that the Denoise FX has made a return to VP18, and depending on the use case, it could be used instead of Median. While both seem to offer similar denoising features, MAGIX tells us that they are quite different, and the denoising effect of Median won’t be as effective as Denoise FX. In our testing, we tend to agree with that, although the performance impact of Denoise vs. Median favored the latter. Just a few seconds of footage would have taken tens of minutes to encode with Denoise FX, so we’ll revisit later and see if that can be improved.

As we’ve seen in the past couple of versions of Vegas Pro, if you own an NVIDIA professional-series graphics card, you might need to manually add a profile inside of NVIDIA’s Control Panel in order to gain full acceleration for some of the FX filters, such as LUT and Median. This issue doesn’t seem to plague GeForce cards, but does impact both TITAN and Quadro. 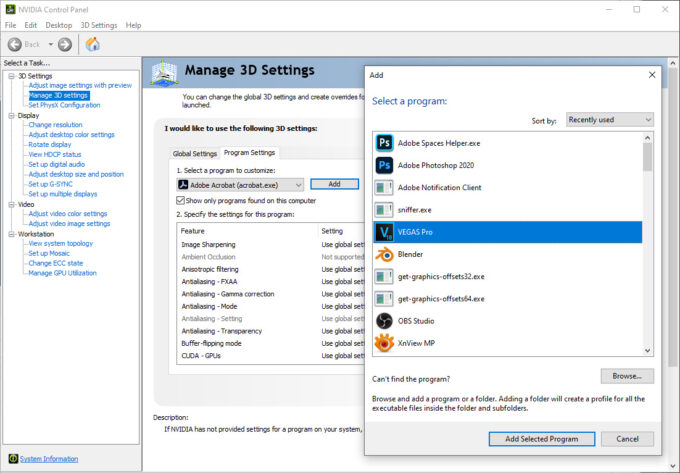 Before diving into performance, we decided to do a little bit of an investigation into the quality of the output between AMD and NVIDIA with their respective hardware encoders, VCE and NVENC, and some of what we found is pretty interesting (to be clear, this is the encoder used in addition to GPU acceleration). When looking at the first few frames of our basic scenes test, which begins with birds hopping around on some beach chairs, we noticed that the AMD output had color noise and artifacting in parts, whereas they weren’t seen on NVIDIA. This all clears up within a second or two, and both outputs from AMD and NVIDIA are basically equal thereafter.

This is interesting to us, considering the fact that AMD hardware typically performs better than NVIDIA in certain FX encodes. It made us wonder if that meant NVIDIA might be the better choice even if AMD happens to churn through certain tests quicker. We then looked at our Median test, and noticed that artifacts could be easily seen on NVIDIA cards (both GeForce and Quadro), but never seemed to show up on Radeon (the artifacts appear as colored blocks in the top-left of the screenshot in the third image of the slider). What makes this complicated is that we’re not sure what causes the artifacts, as the results haven’t been consistent.

More than anything, these are issues we’re mentioning just to mention them. It’s hard to factor these oddities into an AMD vs. NVIDIA debate since some encodes behave differently on each. With AMD, it does mean that the first few frames could be a little blotchy, so timeline cropping might have to take that into account. In most of the other encodes, we couldn’t see this behavior quite as clearly, but the finer the detail, the more likely the problem will be evident.

As mentioned above, most of the tests found here mimic those seen in our previous full Vegas Pro performance looks, but we’ve added three of the new FX tests for good measure. While AI typically accelerates better on GPUs than CPUs, the first go of the Colorize and Style Transfer FX are specific to the CPU. MAGIX told us that it is exploring adding GPU support in the future, and isn’t ignoring the possibility of utilizing NVIDIA Tensor cores.

As for the Black Bar Fill FX, it primarily uses the GPU, so we hope it will scale well. There might have been something we were doing wrong with this filter, but we were unable to take a portrait video and make it widescreen with the help of this blur bar, as you may see on some social media videos. Given that, we’re sticking with a landscape video, as it still uses the GPU the same way.

AMD Radeon Pro and NVIDIA Quadro graphics cards do not have any inherent advantage in Vegas Pro, but we were kind of running on automode, and they just happened to find themselves tested. With 8K becoming a focus in VP, memory would be one of the biggest reasons to go with a top-end GPU. 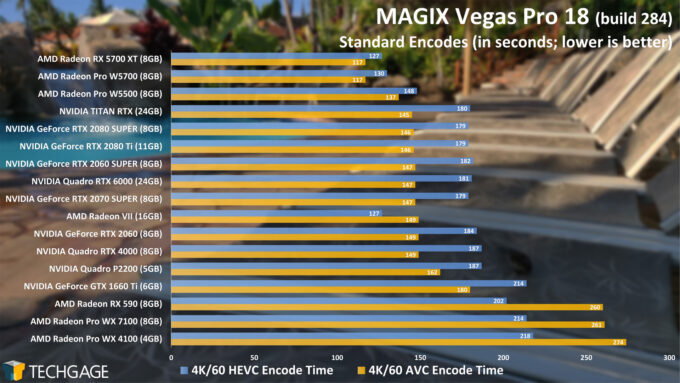 These straight-forward encodes do not offer really exciting results, since the GPU’s dedicated hardware encoder is more important than its general GPU cores. There have been some clear generational improvements, however, at least seen between the older AMD Polaris-based GPUs (eg: RX 590) and the newer Navi (eg: 5700 XT). AMD’s Navi cards even manage to beat out the Vega-based Radeon VII.

One result above that strikes us as pretty intriguing is the GeForce 1660 Ti. It’s based on Turing like the RTX cards, but it sits behind the Pascal-based Quadro P2200 – which has less VRAM and an older encoder engine. As we’ll see later though, things can switch around when more compute is required beyond just the encoder. 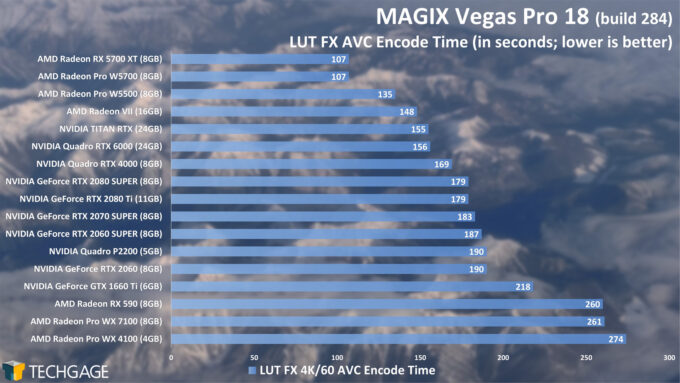 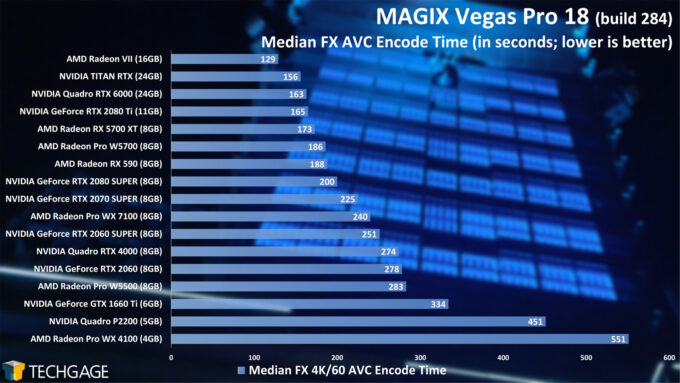 As it has in the past couple of versions, the Radeon VII from AMD manages to rocket to the top of the Median test, proving that while it’s older, the Vega architecture has some serious strengths where you least expect it. The other AMD cards continue to perform great, as the only cards to sit ahead of AMD’s Navi-based cards are NVIDIA’s top dogs (soon augmented with RTX 3080).

Even the LUT test favored AMD quite significantly, with Navi once again soaring to the top, and the Vega-based Radeon VII just behind those. But, just as things were looking so great for AMD, we ran into a hiccup when we added our only new GPU test: Black Bar Fill. Radeon simply doesn’t use the filter correctly (the created bar is completely black), so it had to be dropped from the test. Similarly, the 5GB frame buffer on the P2200 proved to be a major limitation. 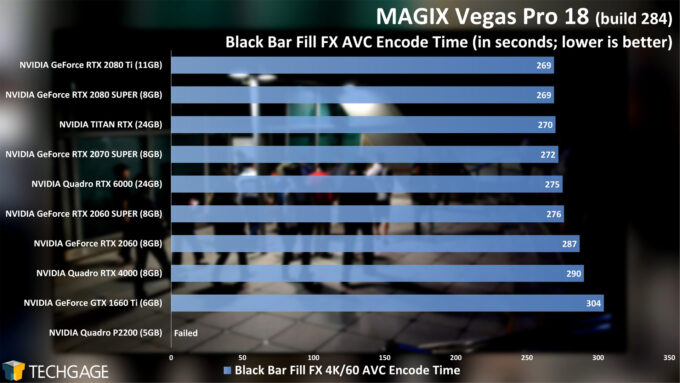 Overall, the scaling from the Black Bar Fill isn’t exactly interesting, although it could be once Radeon can use the filter correctly. Of course, no one eyeing VP18 is going to have only this filter in mind, but it does seem safe to say your encode will be sped-up just a bit with a faster NVIDIA GPU. The scaling is pretty boring in comparison to either LUT or Median, though.

On the next page, we’ll take a look at CPU encode and GPU viewport performance.