Whether you live in an apartment or a house ten feet from another, it’s important to make sure that sound levels coming from your home aren’t going to result in trouble from the neighbors. But don’t fret, as there are simple ways for you to tweak your sound to maximize the experience without affecting your neighbors, all of which are explained here.

The software to fix this problem is the AC3Filter (by Alexander Vigovsky) which can be downloaded for free and works on all Windows platforms.

But simply downloading and installing this software won’t fix your problem. You will need to do some experimenting and adjusting on three sections of the filter software to get a working solution. You will need to set up a volume limiter, a dynamic range control and also adjust the equalizer.

To get started, you need to install the filter and do the basic setup. Once installed, open up the AC3Filter configuration dialog (from your Start > Programs menu) and click on the System tab. On this dialog, and in the upper-left corner, you will find a list of sound formats to be processed by the AC3Filter. You want to check them all since they are all found in various movie files. Also, be sure to set the filter’s merit to “Prefer AC3Filter” to ensure it’s always activated. If you don’t want it to disturb your system’s sound levels (eg. move the sliders in your mixer applet), be sure you check the “Use Direct sound by default” box. 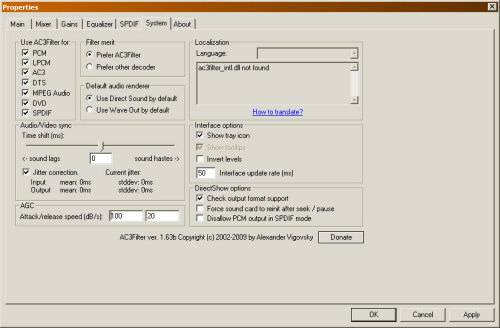 Now, on the Main tab, set the upper-left corner to suit your sound card. Most cards today will support 48KHz 24-bit audio, and some will even go as high as 96KHz and 32-bit. These should be set to match the capabilities of your sound card. You might as well set the filter to up-convert your files, which will often yield a noticeable improvement in sound quality. Other settings allow you to redirect sound to SPDI/F and HDMI outputs. These will need to be adjusted to your system requirements.

At this point, if you’ve checked the box for “Show tray icon” on the System tab, you should be able to play a movie and watch the filter working by clicking on its icon. As the movie plays, you will see the level bars reflective of the various sound levels on each channel of your sound system, on the Mixer tab. Take note of the differences between effects (explosions, gunshots, etc.), dialog (people talking) and foley sounds (rustling paper, crickets, rainfall, etc.) and you will see the various audio bands in use. 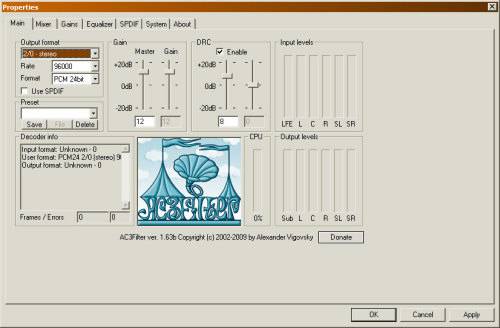 First, you will need to set up a volume limiter. The AC3Filter documentation does a poor job of explaining this, so I hope I can do better. The idea is to drive the overall sound level up to the point where the filter’s limiters are triggered by sounds in the effects band, thus limiting the difference in loudness between dialog and effects.

On the Main tab of the setup dialog, set the Master / Gain control to about +12dB. This will effectively increase the dialog and foley bands of the movie to be about three times as loud as normal, without increasing the levels of the effects band, which is driven into the limiters.

On the Mixer tab, make sure you check the “Auto gain control” and uncheck the “One-pass norm” boxes. This automates the limiter so that your volume levels for high-level sounds remain more or less constant throughout the movie. If you do not uncheck the one-pass option, you will notice that movie getting quieter and quieter with each successive loud sound. The auto gain function, as set, causes the audio levels to recover between loud sounds. 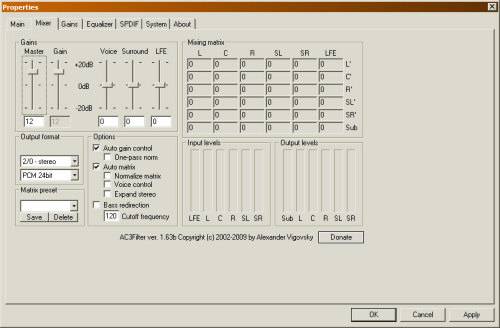 Also on the Mixer tab, check the “Auto matrix” box and uncheck its sub-boxes. This will prevent uneven effects without altering your speaker setup.

Second, you need to set up a dynamic range control to boost the foley sounds to a certain degree. On the Main tab, in the DRC (Dynamic Range Control) section, check the “Enable” box and set the left slider to about +8dB. This will have the effect of boosting the quieter parts of the movie to almost twice normal loudness. Like the auto volume control, this function also automates so that the gain of lower-level sounds is automatically adjusted throughout the movie.

On the System tab, you may need to adjust the attack and release times of the automated level controls (DRC and Auto Gain). To even out the average levels somewhat, you want a fast “attack” time and a fairly slow “release” time. In the AGC section, you will see the filter defaults to 100 and 50dB per second. Setting the release (second) rate to 20dB/s will significantly even out the reproduction of the dialog band of the movie.

Third, you want to limit that BIG sound. On the Equalizer tab, set the presets and sliders as shown in the images below. Of particular importance is cutting the 30Hz band quite deeply, so -8dB should do nicely. Next, you want to cut the 60Hz and 125Hz bands by lessening amounts to smooth out the response curve. The settings shown will lower the levels of infrasonics (BIG sound) to about half the normal (and don’t forget they’re often driven into the limiters as well). You probably won’t notice this without using test equipment. Sounds at these frequencies are more felt than heard, and still produce a noticeable effect, even with cuts this deep. 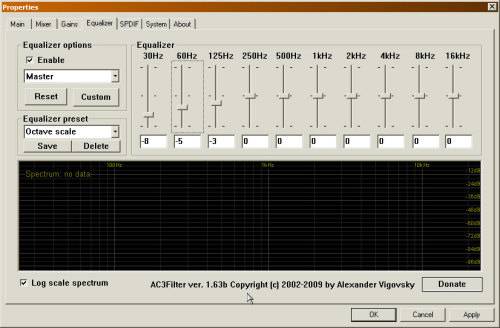 The result? Decent movie sound at much lower volume settings. No, this isn’t the big powerful home theatre setup you’ve dreamed of. But, with the settings as details, you will still have a dynamic range of at least 20dB which is more than enough to enjoy a movie, and since you will able to hear everything with lower volume settings, you won’t have your neighbors banding on your door.

The starting points given are a compromise between THX’s wild dynamics and the lifeless sound of old TV shows. Over time, you can fiddle with these settings a bit to customize them for your own installation and preferences.

If you are wondering whether or not adjusting your sound this way will effect the overall quality of your movie, it will, but not to a great degree. For some, it likely won’t even be noticeable. I’ve drawn up a little chart showing the approximate levels of various sound components in a typical movie while watching it in a quiet room. As you can see, the effect of my settings is to push everything up, making the movie seem considerably louder so that you can turn down the volume and still hear everything. You’ll have the same average dialog levels, but with the volume reduction, the peak level will be way down. 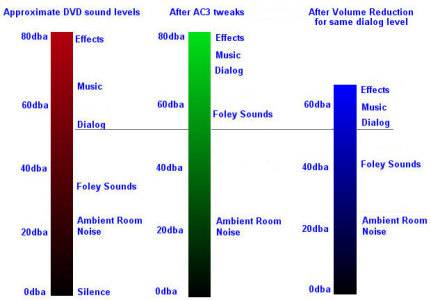 With the AC3 settings detailed, I watch movies at lower volume settings and still hear everything. What I don’t get is that sudden room-shaking BOOM when the Schwarz blows up an entire village to get his kid out of a locked bedroom. But then again, neither do my neighbors… and that’s my point. The effects are still a fair bit louder than dialog, which is still louder than foley, but not so much as to penetrate walls at comfortable listening levels.

Turning down the AC3Filter’s master gain a bit will increase the difference between effects and other sounds, so a bit of experimentation may be in order to find a working compromise between enjoyment and those enjoyment-wrecking complaints. The real key is to give yourself enough of a boost to hear what the actors are saying without turning up the volume so loud that effects can break through walls.