Setup of the TH2Go is simple.  Once the software is installed, launching it brings you to the PowerDesk home screen.  From here one can set up their multiple monitors, set up keyboard shortcuts and designate how the software will handle different windows being opened on different monitors.

For most, the primary area of PowerDesk is going to be the multi-display setup.  This is where the orientation, resolution, color palette, and refresh rate can be set.  In this screen grab, we have two 24” monitors.  These together meet the highest vertical resolution that the TH2Go can handle.  When we bumped down the resolution of our three Dell 24” monitors to 1920×1080, we were then able to utilize all three monitors. 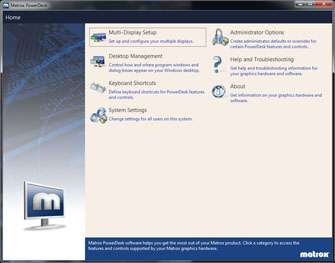 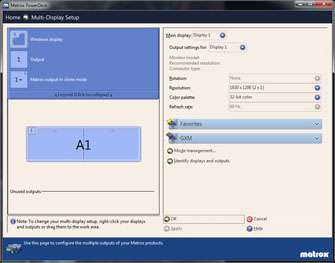 For gamers, one final part of the Matrox TH2Go gaming experience is bezel management.  This feature “was designed to enhance gaming environments by converting three seemingly disjointed images into one continuous image” according to Matrox product page for the TH2Go.  In layman’s terms, it brings in the peripheral monitors in slightly, to line up angles lines that would otherwise look disjointed due to the bezels on the sides of each of your monitors.

Gaming with the TH2Go is a very straight-forward affair.  With the PowerDesk installed, your PC is ‘tricked” into thinking that instead of three separate monitors, you have one very widescreen display.  Because of this, if the games you are playing support this super wide resolution, it will now appear as an available setting.  For the TH2Go, the maximum three screen resolution is 5760 x 1080.  That’s over 6.2 million pixels of gaming delight.

When we reviewed the first TH2Go, we experienced a fisheye effect on the left and right of our display.  This has mostly been addressed and in the below screen shot of HL2: Ep2, this problem is not present.  The super wide resolution does add additional visible landscape on the sides, which comes in very handy in some games like first person shooters and real-time strategy.  It also gives this games a better feeling of immersion as the sides feel like actual periphery vision.

Moving over to GRID 2, we get a little of the fisheye effect.  It’s not distracting, given the nature of these types of games, but the screen grab does provide a good example of the effect that might be present when playing some games at this resolution.

When not gaming, your displays will still appear to your PC as a single, wide display.  With PowerDesk setup, you can still use each monitor independently of the others and when maximizing a window to full screen, it can be setup to open across all screens or with the borders of an individual monitor.

With the capabilities of newer graphics cards, the TH2Go’s novelty of multi-monitor gaming has waned quite a bit. Where before, gamers relied on either a device like this or multiple GPUs, today’s cards have many different video out options and can handle multiple connected monitors without breaking a sweat.

That being said, the true value of the TH2Go seems to have shifted back to what Matrox originally intended it be used for; multiple monitors from a single mobile video source.  Today, I use a TH2Go as a kind of base station at home.  My three monitors are connected to my PC, but their secondary connectors run to the TH2Go.  This in turn gets connected to my Mac via its Thunderbolt port.  This allows me to use my personal monitors when working out of my home office and when needed, quickly return to mobility by disconnecting a single Thunderbolt adapter.  It’s that simple. 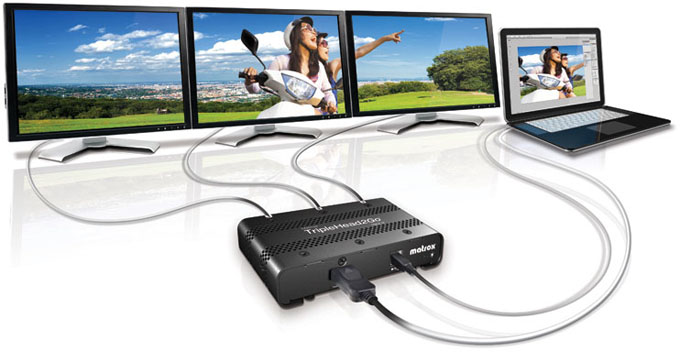 When we first reported on the Matrox TripleHead2Go, the idea of gaming with three monitors was still new to this editor.  I was drawn to the product for this single function. It was only after using it for my day-to-day that I learned the true value of utilizing multiple monitors… a lesson that I have applied to my career to great effect.  There isn’t a workstation or notebook in my building now that doesn’t connect to at least two monitors.  Products like the TH2Go, and it’s smaller brother the DualHead2Go, allow the use of many monitors from a single DisplayPort (or in my case Thunderbolt) port on a notebook.  Retailing for around $250 USD, the TH2Go is a valuable addition for those looking to increase productivity and work flow by adding a second or third monitor to their notebook.