With the digital edition of the TripleHead2Go, hooking up three LCD’s via DVI and VGA is possible. This allows you to drastically increase your desktop space and/or improve your gaming. Best of all, you don’t need to add a second GPU, and not even an additional power outlet is required!


Installation of the TripleHead2Go, on a physical level, is as straightforward as it comes. Thanks to the slightly larger design of the digital version, all three DVI out ports are the back side of the device and are numbered, eliminating almost any chance of messing up the connections. On the front of the TH2Go there is a pair of video inputs, one digital and one analog, as well as a single USB port providing 5v of power over the USB cable.

In order to power the maximum resolution of 3840×1024, a dual-link DVI connection is needed. While many PCs today have dual-link either through their motherboard’s video out (notebooks) or their graphics card (desktops), there are many that don’t and it’s because of this that Matrox included the analog VGA connector on this product. This allows Matrox to market the TH2Go Digital to many more people than they would be able to without the VGA out port. 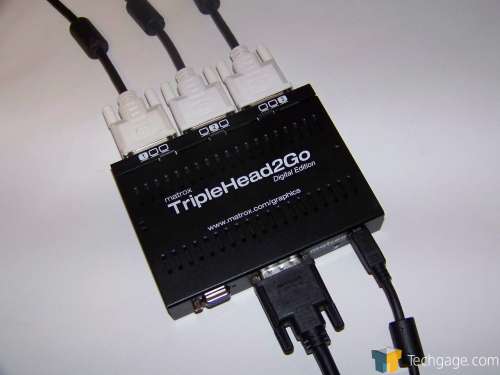 With the digital edition, there are a handful of resolutions now supported by the TH2Go: 3840×800 and 3840×960. If you choose to use the TH2Go for a pair of monitors, you can now use an additional 5 supported resolutions, up from the original 2.

In our testing, we will be connecting the TH2Go to three Dell 1907FP LCD monitors. In the first TripleHead2Go review, we used a single 1907FP and had a pair of 198FP monitors on the sides but with the 198FPs lacking DVI, an extra set of 1907s were employed for the duration of this review.

With our monitors hooked up, and the TH2Go connected to our PC via the USB cable, it’s time to install the Matrox PowerDesk SE software included with the device. While the needed software is included with each TH2Go, the program can be downloaded from Matrox’s website by following a few quick links through the support section of the site.

Once installed, the first screen that shows up gives us basic information about the graphics system of our PC. In our case we can see the three 1907FP monitors and that they are being powered by a single 8800 GT. There are a few additional options from in this window with the most unique being the bezel management. What this does is give the user a more realistic gaming experience by bringing in the side screens by a user defined amount of pixels. While the video card is still painting the full resolution, the picture as a whole looks as if it’s once seamless view with two vertical parts of the image simply hiding behind the bezels. While you lose a small amount of end area, the overall picture benefits from this as the image looks far better than if your PC was not running this bezel management software. For example, the bezels on the Dell monitors we are using aren’t too terribly thin so we only needed to move the sides in 82 pixels each. 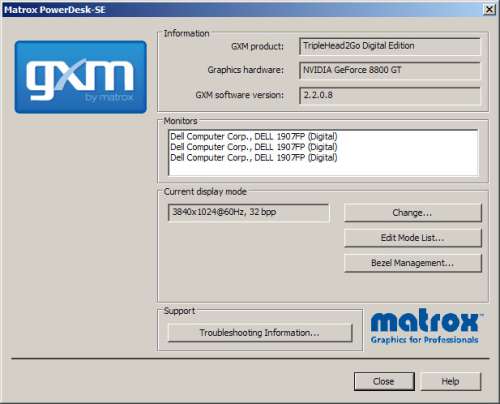 On the desktop management screen we find most of the settings that will help make our time with the TH2Go more productive. By default, Windows will try to maximize a window over all three monitors, because instead of seeing each monitor as an individual screen, the TH2Go tricks Windows into thinking that there is one single, ultra-wide, monitor connected to the graphics card in the PC.

Instead of having to resize each window that you have open, you can allow the Matrox software to control how each window opens and behaves. By default, when PowerDesk is running, each window that you open will stay on the display that the window is opened in. This is nice when you have to have three different windows open as it allows you to open them up and maximize them in whatever display you would like them in. 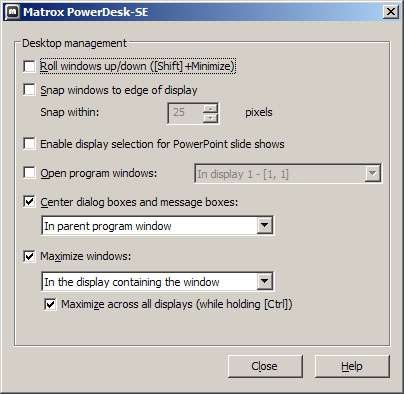 The third screen simply shows you current settings and allows you to change the orientation of the display. It’s interesting to see that it states that the maximum number of displays that can be attached is 64. That would be quite the display! 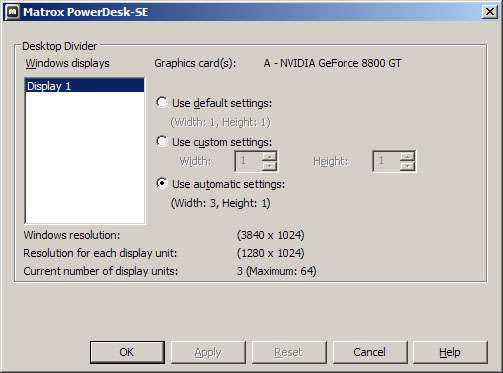 Outside of the bezel management, the PowerDesk SE software really doesn’t address the gaming benefits of using three screens with the TH2Go. For this, Matrox also gives us the Surround Gaming Utility or SGU for short. The SGU is essentially a program that will create a new display .ini for, telling the computer how to operate at such a wide resolution.

Half-Life 2 already supports such a wide resolution but there are games that do not and for those, the SGU has you covered. With a large list of games, you simply select which game you would like to configure and the SGU software will do the rest. Allowing four different resolutions, the SGU takes a lot of the guess work out of gaming on three monitors. 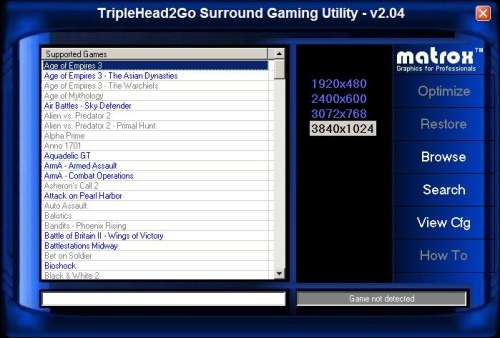 When you select to optimize a certain game, the software will prompt you with on last warning, stating that it will be changing the configuration files of the selected game. If you would like to view the details of the changes to be made, you can view them by clicking on the details button. 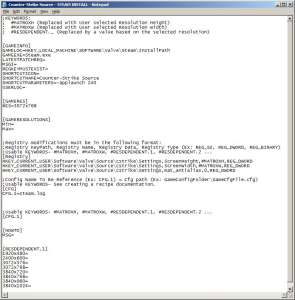 If by some chance you don’t see a game in the menu, or the SGU software does not see a game that is listed, you can manually set the software to search your PC for the .exe file and once found will allow you to let the SGU “optimize” the games config file, thus allowing it to operate correctly across the three screens.

With our installation out of the way, the only thing that’s left is to put it to the test!