After a long hiatus, the infamous Max Payne is finally back. But before you think he’s been living the good-life since the last time we checked in, think again. Beaten down and lacking any feeling of self-worth, we continue the Payne saga by getting an honest job protecting a wealthy family. What could possibly go wrong?

Max Payne is a man who defines what it means to suffer. A former NYPD cop, we were first introduced to Max shortly after the murder of his wife and child, and he’s lost many more friends and allies since then. Following the events of The Fall of Max Payne, Max’s grief got the better of him. He entered a downward spiral, and began living a life reliant on drugs and booze.

So, where from here? Max Payne 3 is an interesting game for a couple of reasons. The first two titles were developed by Remedy Entertainment and written by Sam Lake, whereas the third is handled by Rockstar Studios with Dan Houser as the lead writer. Dan’s other writing credits? Does Grand Theft Auto and Red Dead Redemption ring a bell? Oh, this ought to be good.

And it is. Max’s life is hardly smooth-going, and each game to date has done a superb job in getting that point across. While the original games featured a film noir theme, the third does not. However, what does remain is Max’s constant narration of the goings-on. If you haven’t played the original games, it won’t take you long to realize that Max doesn’t fear death – in fact, he would welcome it after the hell he’s been through. 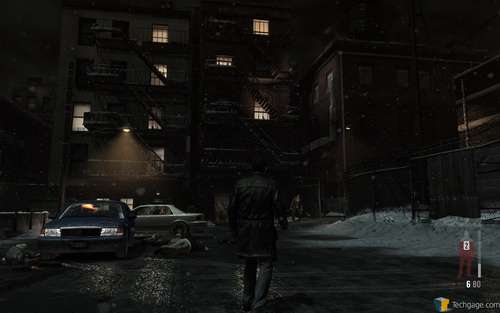 In the game, much of Max’s history is left up for you to already know. Mona Sax, featured prominently in the original games, doesn’t make an appearance here aside from being seen in a quick flashback (she either died or lived in the second game depending on the difficulty level chosen). For this third iteration, Rockstar wanted to “start fresh” with the Payne saga, so hints from the previous games are far and few between. That said, there will be certain areas that are undeniably inspired by the older games, and if you look hard enough, you might even find a television airing Captain Baseball Bat Boy.

From the get-go, Rockstar’s “start fresh” goal becomes evident. Payne is no longer an NYPD cop. With the help of acquaintance Raul Passos, he’s become a private security guard for SÃ£o Paulo’s Branco family. SÃ£o Paulo, being a city engulfed with favelas and extreme poverty, doesn’t blend too well with a family as wealthy as the Broncos. As you can likely already see, Max has his work cut out for him.

Although the game is linear (unlike Grand Theft Auto, for example), the story isn’t always sequential. There will be times when Max will ponder over things that happened in the past, at which point you play through the memory. This technique is hardly new, but it is an interesting way to fill in the gaps and gain a new perspective to a certain event. 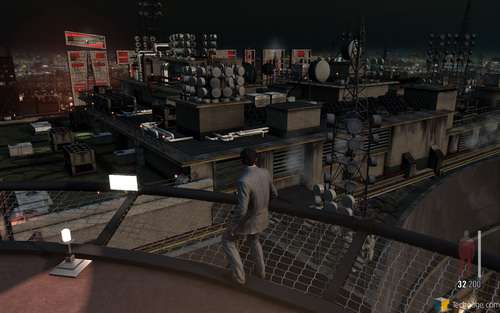 Most of the game takes place in SÃ£o Paulo, with New Jersey making an appearance earlier on. The locales are few, but the environments and levels heavily varied. In SÃ£o Paulo alone, you’ll be traversing the favelas, an airport, police station and more run-down buildings than you can shake a stick at.

During development, Rockstar conducted research to assure that SÃ£o Paulo in the game matched SÃ£o Paulo in real-life as much as possible. Certain elements include the culture and general vibe of living there, the police, the gangs and of course, the weapons. This research has paid off, because walking through a favela in-game can give you a newfound appreciation for how good you’ve got it. Some of the environments are so well-rendered, especially the inside of dank buildings on the verge of collapse, you’ll swear you can smell them (I refuse to believe it’s BO).

The game may be linear in design, but Rockstar gives us reason to explore every inch of a level thanks to golden gun parts and clues strewn throughout each one. Some of these, you’ll trip over. Others, you’ll have to carefully look for. Finding all of either in a given level unlocks cheats that can be enabled in the chapter select for that particular level. In addition, if all of the golden gun parts are found for a particular gun, it’ll appear golden from that point forward when wielded (along with the spent ammo cartridges).

As before, pill bottles are used to both restore Max’s health and enable a “last man standing” mechanic where, before dying, you’ll be able to shoot at whoever killed you in order to revive yourself. As pill bottles are the only way to restore your health, you’ll be spending a lot of time looking all over for them – and trust me, some are well-hidden. 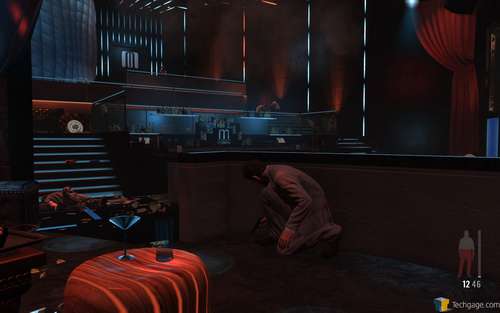 On the topic of mechanics, Max Payne 3 introduces something rather significant to the series: multi-player. As is now evident, this isn’t some after-thought mode that Rockstar put in place to help sell more copies; it’s robust, and quite a bit of fun. Aside from straight-up deathmatch and team deathmatch, there’s a “Gang Wars” mode that will allow you and a group of friends to team up and go head-to-head with rival gangs. Each round involves a story which will evolve in a different way depending on how the current round ended.

For a little change, the “Payne Killer” mode assigns two people to play either Payne or Passos, each of which is heavily equipped with ammo and pain killers, making them hard to kill. But if killed, the killer assumes the role of that character, making this a challenging, but potentially rewarding mode.

A staple of Max Payne games has been bullet time, but in multi-player, adding such a mechanic unveils obvious challenges. Instead of forgoing the idea of implementing it, however, Rockstar went with a compromise. Whenever you enter bullet time, only the players within your line of sight are affected. So yes, you do force others into this mode, but it’s really the only way such a mechanic would remain fair to everyone.

Multi-player in Max Payne 3 is both exciting and deep, something I admit I wasn’t expecting. As purely single-player games before, I wasn’t sure how well the gameplay would translate to multi-player, but Rockstar has certainly done a great job here. With MP-specific DLC on the way, it looks to have a long life ahead of it.