When it comes to benchmarking hardware for serious use cases, there are no better people to turn to than those at SPEC. I like to call them the “masters of benchmarking”, as each one of their tools are meticulously crafted by professionals to deliver results as relevant and accurate as possible – a goal shared by us at Techgage.

For testing the performance of workstation cards, we take advantage of two SPECapc benchmarks – 3ds Max 2015 and Maya 2012 – as well as two that don’t require a standalone application: SPECviewperf and SPECwpc. While the Maya benchmark might be growing a little long in the tooth at this point, it still scales well with current GPUs. 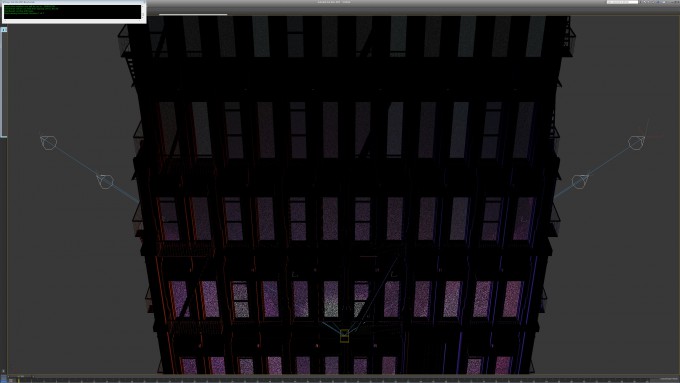 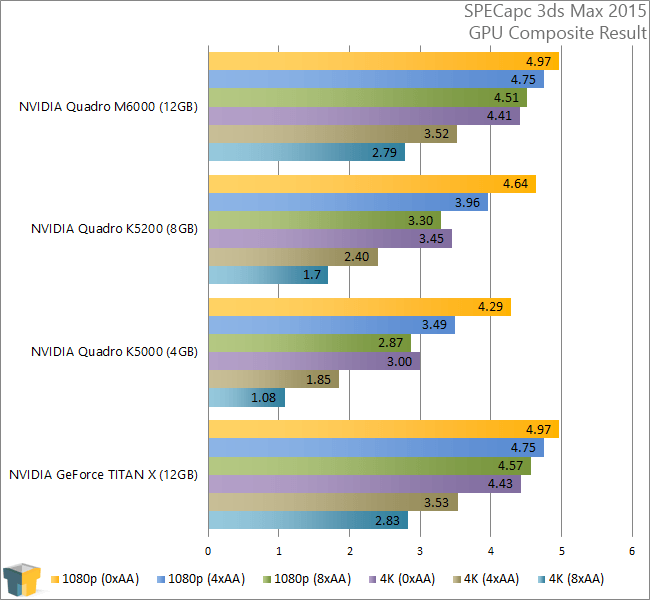 Thanks to the large 12GB framebuffer of the M6000 and TITAN X, higher resolutions with higher anti-aliasing options are possible. 4K 0xAA will offer great performance on either card, but 4xAA and especially 8xAA could prove to be a little too taxing in complex projects. In most scenarios, that wouldn’t be a memory limitation, but instead a performance one. 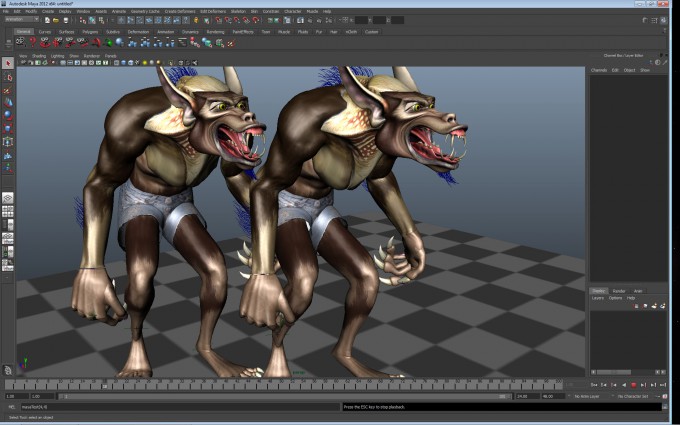 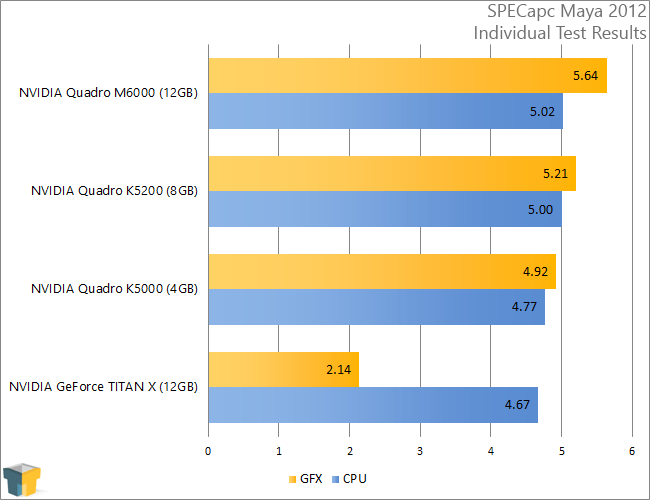 We saw with our 3ds Max testing that Quadros might not perform better than GeForce gaming cards in iray rendering, but there are considerable differences when it comes to viewport performance. Here, the M6000 dramatically outperforms the TITAN X. Even the (now) modest K5000 does.

One thing that’s interesting to note is that because the GeForce card isn’t optimized for Maya, it actually manages to slow down the overall CPU performance as well. Both the M6000 and K5200 are about equals in that regard.

Whereas both SPECapc benchmarks used above stress a variety of different components of their respective tools, SPECviewperf’s target is singular: viewport performance. One reason I like this test is because it utilizes software we couldn’t otherwise test with (due to the lack of a license); namely CATIA, SolidWorks, and Siemens NX. 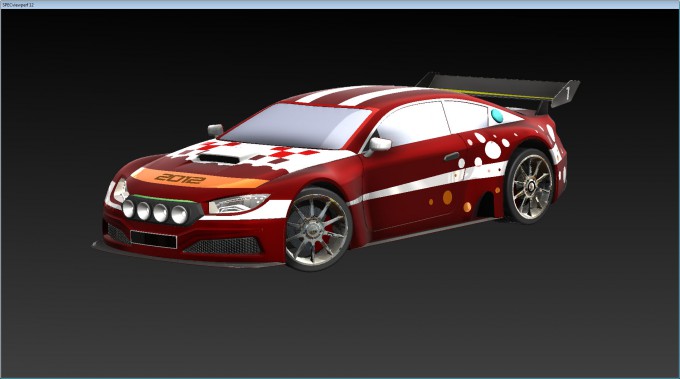 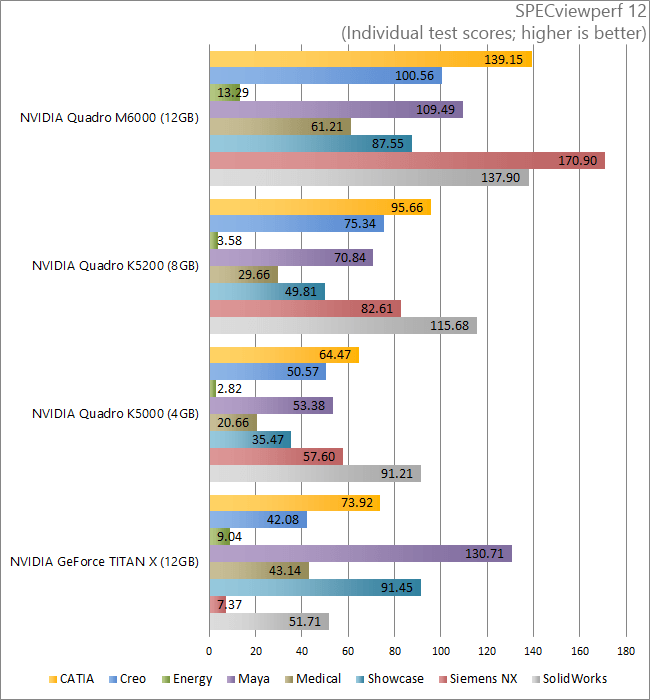 It’s with a test like this where a major perk of proper workstation cards can be seen. It goes without saying that anyone using Siemens NX is going to be equipped with a workstation graphics card, and the results seen here prove why that will remain the case. Overall, thanks to the driver optimizations of Quadro, even the K5000 manages to outperform the TITAN X in Creo, NX, and SolidWorks.

A bit of an oddball result here is with Maya, as TITAN X somehow manages to outperform the M6000 (a repeated run yielded the same result). This is interesting because we saw the opposite kind of result with our SPECapc Maya 2012 test. There, the M6000 obliterated TITAN X. That particular test aside, the M6000 reigns supreme in CATIA, Creo, Energy, Medical, NX, and SolidWorks.

The “w” in SPECwpc stands for “workstation”, and it acts as a bit of an “overall” testing suite. In some ways, it combines the goals of its other tests and combines them into a single benchmark. Thus, the results are split into six categories, and the result of one might matter more to some people than others. 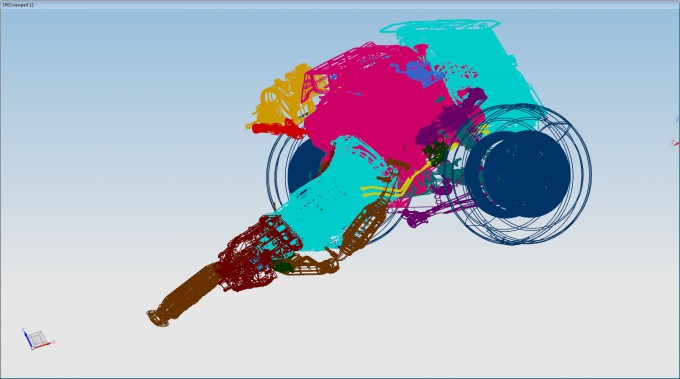 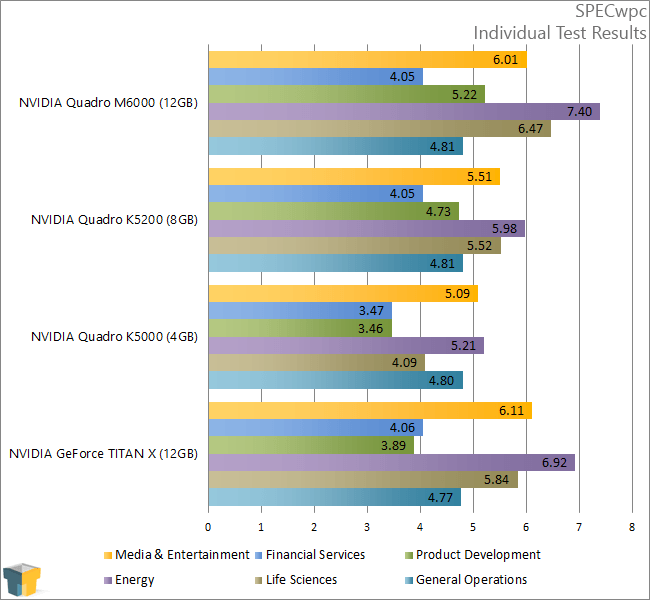 The gains seen here between the M6000 and K5200 are not what I’d consider stark, and I’d imagine if I had a K6000 to test with, the gains would seem even more lackluster. Exceptions would be with life sciences and energy. There are definite gains all-around, but nothing likely to warrant upgrading from the previous top-end king, the K6000.