The market may be filled to the brim with war-based games, but few come from a series as reputable as Medal of Honor. After a bit of a break, the latest iteration has finally been released, and it prefaces some hyped competition, Call of Duty: Black Ops. Did EA do enough to make you forget all about that “other one”?

Fans of war games on either the console or PC are in one of the best spots that a gamer could possibly be in, because it seems like there isn’t a month that goes by where there’s not some major title coming out, whether it be a first-person shooter, real-time or turn-based strategy or even a simulation.

On the FPS side, though, many gamers are beginning to feel that the war genre has grown a bit stale (alright, “beginning to” might be a poor choice of words), but for those of us who simply can’t get enough, there’s always the hope of a game that will come along to completely blow away our expectations. Is Medal of Honor one of those? That’s what we’re here to find out.

Unlike a lot of war FPS titles out there, Medal of Honor comes from one of the most successful series on both the console and PC, “Medal of Honor“. Yeah, it’s clear that creativity doesn’t exactly shine in all areas of development nowadays, with many companies using a default name for many popular games and movies (Rambo, Fast & Furious, etc), but to be fair to this particular title, it is meant to be a reboot of the series.

It’s been a while since MoH fans have been greeted to a standout game, and its EA’s hope that the latest iteration is going to do just that. Unlike all of the other MoH games to preface this one, the latest Medal of Honor takes place in the modern era, a la Call of Duty’s Modern Warfare series. 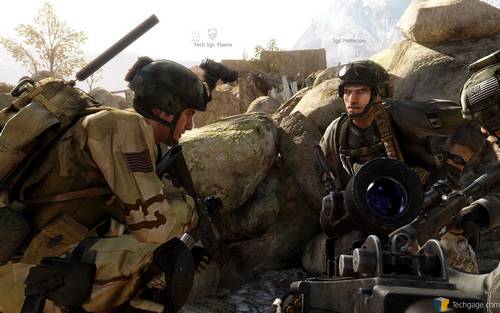 The fact that this Medal of Honor is meant to reboot the series isn’t the only thing that makes it interesting. No, another fact is that both the single-player and multi-player aspects of the game were handled by different divisions of EA. Danger Close, EA’s Los Angeles studio, oversaw the single-player campaign, while DICE, the EA-inherited Swedish company, handled the multi-player.

Like Infinity Ward’s CoD: Modern Warfare series, the latest Medal of Honor has you proceed through the entire game through the eyes of different characters. The primary is a Navy SEAL named “Rabbit”, and during the missions that have you play as a different character, there’s going to be a lot of interconnection going on. It’s rare when you are left wondering where most of your teammates are.

Medal of Honor’s story contains both fictional and real elements… real in that it’s developed with the help of world events, such as the September 11 attacks. The game starts you out during the period of the Afghanistan invasion, and you’re monitored/commanded by Colonel Drucker, who is constantly being given poor and incompetent advice by General Flagg – the guy who ultimately calls the shots.

The game sees you go through various parts of Afghanistan, and for the most part, the scenery doesn’t change too much during your five-hour tenure. You’ll be conquering both ground and air, and also be able to control some very cool vehicles – from ATVs to an Apache helicopter. Much of the game is a copy / paste job of previous MoH games or other current games… kill, kill, kill, and save the occasional teammate ass. 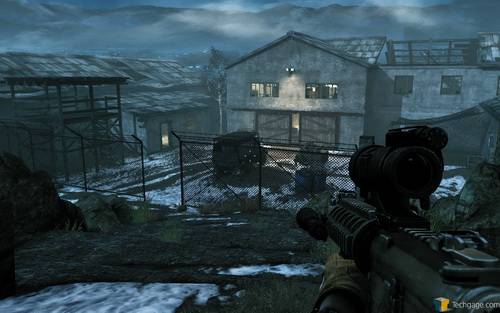 When I say “copy / paste”, I couldn’t be more serious. Most aspects of the game don’t seem original, and during it, I couldn’t help but think back to the Modern Warfare series. That’s not to say that Medal of Honor does nothing unique, but it doesn’t do much to stand out in any real way. The story is sub-par, with a lacking ability to truly connect you to any character (the five hour game time doesn’t help this either), and many scenarios seem uninspired.

Being that I’m a bit of a drone when it comes to this genre of games, story and familiar gameplay don’t bother me too much, because I usually just continue to eat it all up. The problem here is that Medal of Honor has a couple of major downsides that help make all of this stand out even more. If the game could be beat without encountering some of these small niggles, it could be that the game would seem a lot more fun.

I mentioned a “kill, kill, kill” theme a moment ago, and like no other war FPS I’ve played, this game gets monotonous quick. Again, this is no doubt amplified by the fact that this is an extremely short game, but I felt like I never had a true break from simply killing everything I could, either out in the open or down the sight of a scope. Only once was there a true sense of stealth, and boy, was it refreshing.

Admittedly, being able to hop into a mounted gun in the back of a truck, or into an Apache helicopter, helped ease the tedium a bit, but that can only go so far. If you die minutes into a gunfight, you will have to start it over, and trust me, that gets old fast. This brings me to another issue… bizarre AI, or instances where you’re killed and have no idea what hit you. 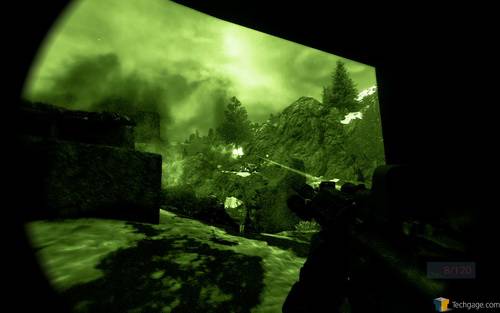 A major part of this problem is the lack of direction in the game. Compared to a game like Modern Warfare 2, Medal of Honor is more of a simulator, because it doesn’t baby you in any way – and I mean this. As an example, one level has you trying to advance towards a building that has someone firing almost constantly at you. Even if you have your crosshair right on the shooter’s head, pulling your trigger is useless. I died four or five times during this scene and couldn’t easily figure out what I was supposed to do.

As it turns out, I was supposed to move to a precise location in a very small area, where it would literally trigger my AI teammates to continue along. It wasn’t too long after this instance that I realized this would be a common occurrence. There are many times during the game where you need to run over a certain precise location in order to actually continue along. Worse still, there are times when oncoming combatants seem infinite – literally – until you hit this trigger.