The market may be filled to the brim with war-based games, but few come from a series as reputable as Medal of Honor. After a bit of a break, the latest iteration has finally been released, and it prefaces some hyped competition, Call of Duty: Black Ops. Did EA do enough to make you forget all about that “other one”?

At the same time, Medal of Honor could only be more linear if the entire game took place in a single hallway. There are very rare occasions when you are allowed to choose between two paths, even if both seem totally accessible. You’ll run into many occasions where a path your teammate just went down is inaccessible to you, despite only being blocked by a 1 foot high ledge. There are many, many invisible barriers here, which is very unusual for a game like this.

On the upside, there are many different weapons for you to take advantage of, from the typical manual pistol to an AK-47 to a rocket launcher. In terms of special and more exotic weapons, there is a lot of that as well. There’s one sniper rifle, for example, that has an incredible zoom, and because it can shoot so far, there’s always a delay in your kill. Being that it’s ultra-powerful, it can literally decimate the head of anyone finding themselves in your sights – a second or two after you pull the trigger.

There are also many guided weapons as well, where you can use a laser to direct the gunfire from air fighters, with the projectiles either being bullets or rockets. A knife also finds itself here, and is readily accessible for quick kills. However, it’s unlikely you’ll see much use of it outside of multi-player. 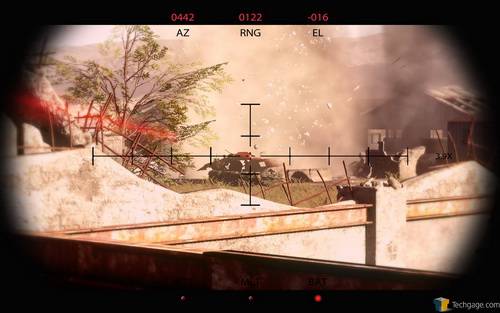 In terms of real depth and difficulty, Medal of Honor offers little. As a general rule, I play any new game first with the middle of the road difficulty, which in this case was medium. Given this, I expected a bit of a challenge, but it sure never found me. Most of the time when I died, I felt like I died due to a fault of the game, whether it be a grenade with less than a second warning or a death where I don’t even know what hit me. Or the best one – dying because you get caught on some invisible blocking object for a couple of seconds.

Then again, there’s the lack of actual direction that can cause death after death until you clue into what’s going on. During a helicopter-based mission, you must make sure to wipe out all of the rocket-equipped people on the ground, and here, I died a total of three times, even though I thought I was free and clear. As I flew out of the level, it never failed that I’d get shot down.

The reason for these frustrating deaths was due to me being oblivious to the fact that the helicopter I was shooting from had missiles built in, and it was only by accident that I hit the “G” button and saw one fire off that I clued in. At no point do I recall the game telling me about this missile, and even if it did, I wouldn’t have likely heard it due to the character voices usually being overpowered by enemy fire.

Much of what I’ve ranted about so far might come down to a matter of opinion, but there are many things that I believe could have been altered just a wee bit to make the game much more enjoyable. For such a short game, I was surprised that I died as much as I did, and if it wasn’t for that, the game would have only been a four hour game. A four hour game… for $60. That’s a hard one to stomach. If those four hours were mind-blowing, then sure, but there was none of that here. 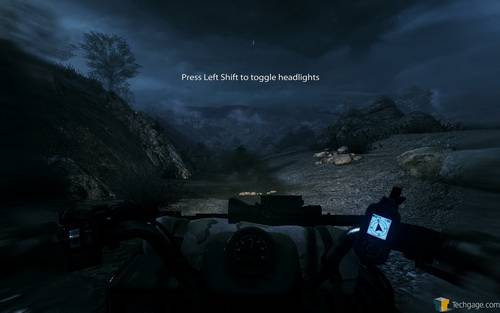 To make that price tag even sweeter (sarcasm), the game finishes in such a way that it’s undeniable that DLC is en route, and given that the game is published and developed by the king of DLC, Electronic Arts, this all comes as no surprise.

To be fair, I didn’t touch up on the multiplayer at all, which is pretty well half of the game. I played through a couple of rounds, and after seeing starkly similar environments to the ones I just spent a hard five hours in, I just couldn’t get into it. If you enjoy the look of the trailer for the game, our screenshots, and envision multiplayer, that’s pretty much enough to sell you on it.

As you’d expect, there are various MP modes to take advantage of, and thanks to a robust leveling system, you might just get addicted if the eight maps grab you that strongly. As you level up, you gain access to new weapons, ammo types and of course, attachments. Unlike Modern Warfare 2, Medal of Honor allows people to create dedicated servers, which is to be commended.

Once the SP game is over, you are able to go through it again via a “Tier 1” mode, which is essentially the game with an amped up difficulty. Think harder than hard. It’s a test of your skill and patience, and intertwined with it is friends support, so you can compare the best times to your peeps and even see specific data such as how far they made it into a particular level before dying. For those who love to be competitive with their friends, this could extend the five hour game time significantly. 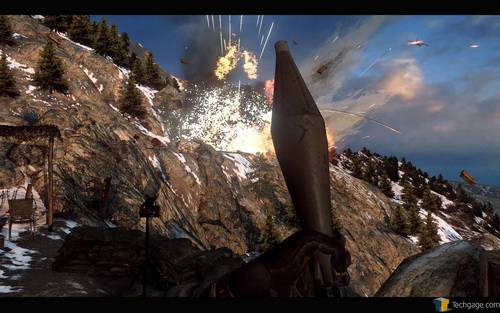 In the end, Medal of Honor to me doesn’t hit much of a mark. For multiplayer diehards, there’s going to be a lot more gametime to be had, but for me, I couldn’t get into it. Could it be that Modern Warfare 2 spoiled me? It’s hard to say, but I certainly didn’t get the same feeling here as I did with that title. And at the same time, when I beat MW2, I immediately beat it again. Here, I have no desire to play the SP mission again anytime soon, if ever.

Medal of Honor isn’t a game I decided to review for the sake of it, but rather a game I’ve been personally waiting months for. I even refused to download the beta or read previews because I wanted everything to be a surprise. Well, you could say I was surprised… just not in the way I had hoped.

For those looking for a stop-gap measure to lead you to another game, MoH is certainly good at that, but for $60, the price is unreasonably high unless you are a devout multiplayer gamer. If you don’t fall into that category, you’re safe to pass, unless money is no object. For the rest, Black Ops is right around the corner.