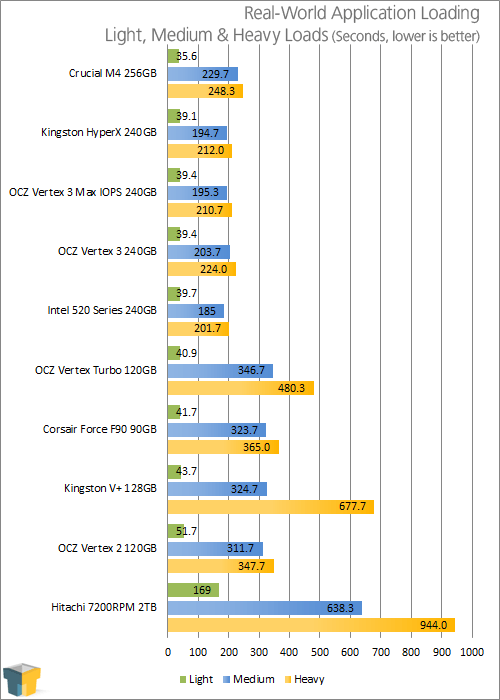 In our light batch test the 520 SSD loses out by 4 seconds to the m4, and delivers an identical time of 39 seconds with other SandForce SSDs in our test. But how does the 520 fair when we put its queue depth 32 rating to the test? SandForce drives are some of the few capable of supporting QD32 ratings, so the 520 has some tough competition there as well. If the light batch test was a 100 meter dash, then the medium test is more like a 500 meter relay event.

However, it is with no great surprise that the 520 walks away with the best times in both the medium and heavy batch test scenarios. When put under the harshest loads the firmware in the 520 drive is given the room it needs to shine. In the medium test the 520 shaves nine seconds off the previous best result, and widens it slightly to eleven seconds in the heavy batch test.

The heavy batch test is where things get really interesting. If sticking to our sprinting analogy this would be akin to the same 500 meter relay as before, but with all the runners carrying a 30lb backpack strapped to their backs. The random read IOPS of the anti-virus test can be brutal to weaker controllers with lower IOPS ratings (hence why hard disk drives slow to molasses during scans), but the 520 shows it’s the best of the pack here. Or to put it another way, the addition of a simultaneous 5GB directory anti-virus scan to the medium batch test only adds an additional 16 seconds to the overall completion time. Not too shabby.