There are two important points worth discussing before we reach our conclusion. First off is that black cloud that has perpetually haunted SandForce SSDs. Although the reputation was well-earned, culminating in the eventual discovery and fix for the system BSoD issue, there in fact isn’t an SSD out today that hasn’t had a major firmware incident (save just two). One of them is too new to count yet, and the second happens to be the 510 Series. But even Intel is not immune, as its X25-M and 320 Series users can attest.

The simple fact is SSDs not only push the performance envelope to completely new limits, but in doing so they also expose unseen or unknown issues in other system hardware. Marvell SATA 6Gb/s controllers on many currently shipping motherboards come to mind. But the point is, regardless of brand, model, or type of SSD, there are going to be some users with problems for one reason or another. Users need to be aware of this and not simply assume “just any” SATA port will just do or that no BIOS configuration is required, when in fact it is required for proper operation. Always use an Intel or AMD port when available, make sure it is set to AHCI mode, and if it is a SATA 6Gb/s capable SSD then utilize a SATA 6Gb/s port if possible.

LSI is a well-respected company in the RAID and server environment, and with its recent acquisition of SandForce, SandForce now has the backing and the means to not only continue development of future controllers, but to ensure more rigorous testing measures as well. 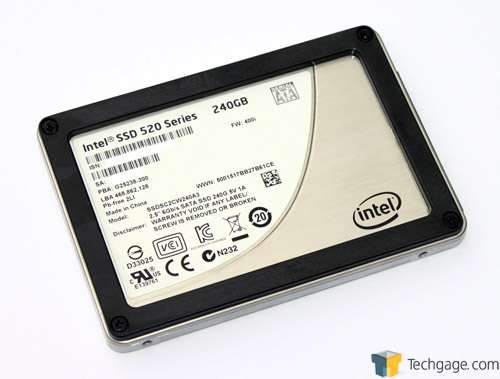 Of more interest to a wider range of readers will be the topic of SSD longevity. NAND type (MLC vs SLC), size (50nm vs 34nm), and quality (grade) will each impact the lifespan of an SSD. There is yet another factor however, and that is write amplification. Write amplification is the value that, for each 1 part of data written, some additional overhead would be incurred and written as well. All else being equal, the higher the multiplier the more data ends up being written, and therefore the lower the lifespan of the NAND. Intel’s own in-house controller boasted one of the lowest possible write amplification numbers of around 1.1, which is likely why only the 320 Series received a 5 year warranty but not the Marvell-powered 510 drives.

The 520 Series will be only the second consumer MLC based SSD to receive a 5 year warranty, and this is likely due to how SandForce controllers work. Normally the write amplification factor can never be below 1 because an SSD must write all user data to the flash memory, and best case that means 1:1 parity. SandForce controllers achieve their performance through on-the-fly lossless data compression, so while 10MB may be written to the drive, only 6MB is physically written to the NAND memory. This sneakily bypasses the 1x write amplification limitation and drops it below 1. Traditional SandForce controllers achieve an average 0.66x write amplification factor, and while we cannot yet say what number the 520 is capable of, it will should in the very least be as good as or potentially better than the original SandForce firmware.

So when combined with Intel’s own custom firmware, the longevity of the NAND in Intel’s 520 Series drives has the potential to easily exceed that of even 320 Series drives. This also explains Intel’s choice to offer a 5 year warranty on the 520 Series. Even during our conference call the terms “most robust” and “obsessively high reliability” were bragged about, so it is pretty clear that Intel is extremely confident in these new drives.

The first, err, actually second thing that crossed my mind after seeing the performance figures is that this is going to be one of those rare “have your cake and eat it too” products. The first actually was that I wanted one in my own desktop. Specifically, the fastest SSDs on the market today utilize SandForce controllers. But with the ever present cloud of uncertainty regarding firmware issues, a very large portion of consumers have made a point to avoid SandForce-powered SSDs.

On the opposite side of the coin, Intel’s own 320 Series have been considered to be one of the best drives for longevity and the company backs it up with the only available consumer five year warranty, but the performance was middle of the pack at best and they were priced against the best performing drives on the market. With the 520 Series Intel has combined the best of both worlds, and aims to deliver a reputable drive it can stand behind that not only leads the field in performance, but can do so while reaching new levels of flash NAND longevity unseen from most similar MLC flash SSDs.

The Intel 520 Series has the best performance we’ve seen to date from any SSD in our suite, but it only gets better. It ships with Intel’s unique 5 year warranty and packs Intel’s own custom firmware. Both of these as well as the write amplification reasons we mentioned previously should go a long ways toward boosting the longevity of these drives. It doesn’t hurt that Intel’s own adoption of SandForce controllers has to have quite a positive effect toward potentially finally clearing away the long hanging dark cloud that has followed most other SandForce drives for some time.

The 520 lets us have our cake and eat it too, but there is one single shortcoming to the 520 Series; specifically, the price of that cake. At $229 for the 120GB model this pegs the drives as the most expensive SandForce SSD on the market even against other premium SandForce offerings, which even then typically have large mail-in rebates further reducing their prices.

The 520 Series is a full replacement of the 510 Series so it is good to see that prices will be significantly cheaper than the outgoing 510 Series, but still users will be paying a premium if they decide to go with a premium quality 520 Series SSD from Intel. Given the street price for the older 320 Series pegs the 120GB at $200, we consider the additional $30 to be more than worth upsizing to the 520 Series. The warranty will remain the same, but performance will be better in all respects.

And if you are in the market for an Intel solid-state drive then only serious option left for us to recommend is the 520 Series. Of course, if price is not a main factor or if the 5 year warranty is enough to warrant the additional cost compared to other competing SandForce drives, then Intel’s new 520 Series SSDs are very likely made just for you.