Metro: Last Light is an interesting game. It’s not directly tied to the book series like the original was, it’s been delayed numerous times, and has even changed developer hands. Given all this, does Last Light’s emergence herald a new classic, or should it have stayed in the dark?

The Metro series tells the story of its protagonist Artyom, a man who is trying to survive after a nuclear holocaust in the only habitual place left on earth, the Metro tunnels under Moscow. The first game took many gamers by surprise, not only for its graphical requirements but also because the game stayed true to the books with its very typical Russian ending. This was unfamiliar to many gamers and some felt uncomfortable with how dark the ending was (if you chose that route) – but it’s not atypical of Russian literature.

Metro: Last Light is just as dark, however; Artyom is now haunted by the events that took place in Metro 2033 and is somehow given a chance to be redeemed for his actions. Artyom joined the Rangers in the first game, which hail from a Metro city called Polis. From there, they are dispatched to other Metro cities that might be overwhelmed with local problems, like outbreaks of infection or being overrun by the beasts that now walk the surface, that they cannot handle themselves. Thus, they try to be neutral in the affairs of the Metro stations on a political level. 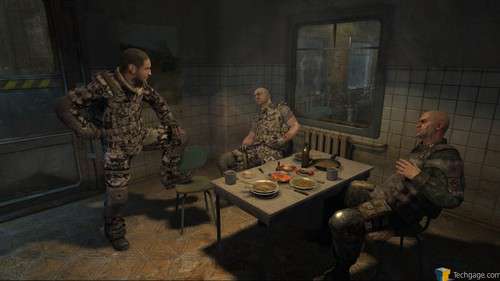 During the last events of 2033, Artyom helped the Rangers gain control of a forgotten Russian military facility known as D6, which holds many advantages to anyone who possesses it. While on his quest for redemption in Last Light, Artyom finds himself caught up in the affairs of the other factions – Nazis and the Reds – which are preparing for an all-out war and control over D6. Will there be salvation for Artyom and the Metro or will it all burn in the fires of war? These are the questions you must answer in Last Light.

Given the exquisite graphics of 2033, Last Light is not surprisingly one of the better-looking games out there; however it is not without its problems. There were several times that I would run in to issues like textures being stretched on top of the water, the light flickering even though its source was constant (such as a fire), shadows not overlaying on objects so I’d see weird geometric fluctuations, and etc. These issues were not game-breaking; they were however persistent and quite rampant. 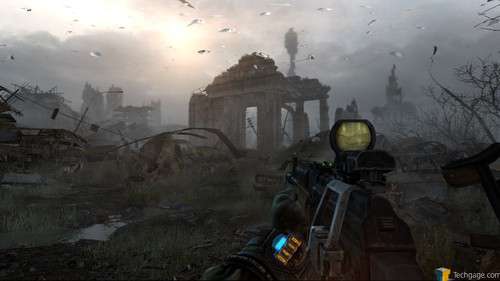 There were a few other issues that I had run into, that again, were not game-breaking. For example, when I held the Sprint button down while pushing forward, Steam’s overlay would appear. There were other keyboard combinations that would kick me to the desktop, but not close the game. The game also does not support multi-monitor properly; the NVIDIA profile for this game on its website says it does, but the HUD and menus have been shifted to the left. Thus, this game was not as polished as the first game was, at least where the graphics are concerned.

Though there were many graphical bugs, the game’s story was told very well. This is done through journal entries from Artyom and also the dialog from the support cast, which is given a little more time to explain what’s going on. I personally feel that the first game suffered in the storytelling department, but this game does not. What made Last Light even more enjoyable for me was when all of these elements came together, there were times that I was truly frightened – and that takes some doing for someone who is generally never scared. But, this game pulled it off.

This is also a world where everything feels plausible; that goes from the living conditions all the way down to the currency that is used. The biggest complaint I have for the game is that even though you may be above ground, there were many invisible walls, and it was still a linear path. This is something that is acceptable in the Metro because of how limited space is visually, but it shouldn’t happen anywhere else. 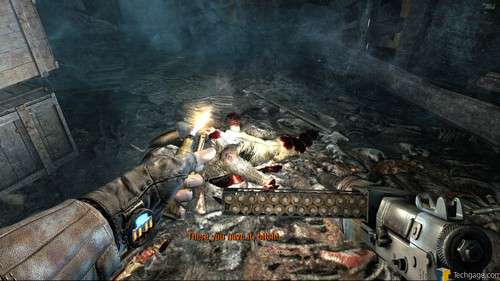 Like in the first game, there are two endings that can happen, which are dictated by your actions throughout the game. One sore spot for me in Metro 2033 was that the players couldn’t find much currency, but now, you can actually earn a good deal of currency, if you do it right. This makes things easier to accommodate any player’s play style and keep them fully loaded.

Last Light departs from its predecessor in that it is no longer run-and-gun. Rather, this one is more of a stealth gun game. This doesn’t mean that you have to be uber-stealthy, but it does make the game much more challenging, and if you’re going for all the achievements, then indulging in that playstyle is a requirement. Stealth in Last Light does not feel tacked on; the AI responds appropriately.

The greatest stealth obstacle in your way is that you cannot lean around corners. This means for you to get a good view of an area around corners or down a hall way, you need to step out in front of the enemy, sometimes not knowing if they’ll be able see you. Corner-leaning is a very simple mechanic to add in and without it, it makes things more difficult than they should be. 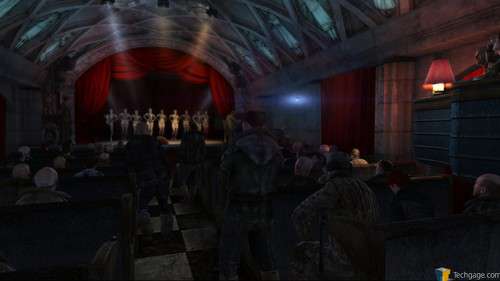 Voice-acting was well performed by all of the actors in this game. The only hiccup was with the lip sync; there were times that it did not match up for the character – they just didn’t move their lips at all. The sound effects did not suffer from any bugs. The most impressive sounds I thought came from the thunder and lightning sequences while above ground.

In the end, Metro: Last Light does things better than its predecessor in many ways; this is the greatest strength this game has. Thus, this is a great game for veterans of the franchise and newcomers alike. However, the persistent problems, even minor, can be annoying at best. It does seem that the game should have had a bit more polish before its release, but thankfully, the blemishes don’t ruin the experience.