Ergonomic keyboards are one of Microsoft’s specialties, so how does their latest 7000 desktop fare? Notable features include 2.4GHz wireless technology, zoom button, hot-keys, soft palm-rest and also a new mouse that promises 6-months of battery-life on a single charge.

Insert/Home/PgUp/Del/End/PgDn are right where they are supposed to be, finally. (the previous comparable version to this keyboard reconfigured these keys quite differently so after a couple of years of using the messed up ones it will take me a bit to get used to the regular setup again. Ack I have to look at the keyboard!)

The keys seem smaller, most noticeable the Enter button is definitely smaller â€“ the keys to the outside such as tab, caps lock, shift, ctrl, backspace, and backslash are smaller, while the central keys, T, H, G and N are much larger. Perhaps people had issues with improper finger to key relationships and felt a need to be able to hit the H with their left hand. This setup does keep your hands a little further apart, and I’m still finding I’m hitting the wrong buttons for quotations, I have to move just a little further than usual and I keep getting colons instead. That also goes for the smaller Enter key, I would have preferred it to be a little larger.

The small buttons in the silver field are back and forward, as are the two thumb buttons on the mouse. Because I’m a girl and I have relatively small hands, I would most likely use the ones on the mouse as the ones on the keyboard are a bit of a stretch for me. Across the top is a plethora of silver buttons including Media buttons with My Favourites front and centre between F5 and F6.

The first grouping of three consists of Web/Home, Search and Mail. There are then 5 programmable buttons, a Mute button followed by Volume up and Down, and a Play/Pause button. Over the Print Screen/Scroll Lock/Pause Break buttons is a quick key to the calculator. Mysteriously, above the numpad are additional buttons that are = ( ) and left arrow. The five programmable buttons are very easy to program, the first time you press one, a dialog pops up that allows you to assign that button to a file or program. 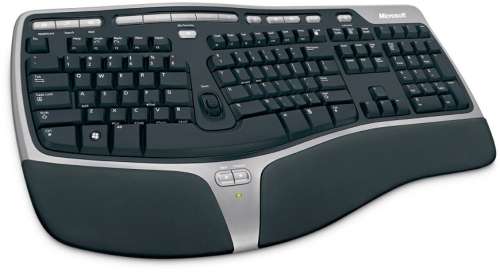 But wait, there’s more! The My Favorites button I mentioned above, is not what you would immediately think. My assumption was that it would open a browser with the Favourites bar expanded, but I was wrong. THIS My Favourites button opens the dialog that lets you quickly program the five silver buttons above it. Now why this was included I honestly have no idea, I mean seriously how many times are you going to program those buttons and how hard is it to do so through the software menu? It’s a redundancy that simply takes up space and confuses on first use.

AAAAHHHH nnooooooooo there’s an F-Lock key. Run away! Oh the headaches I have had with the F-Lock key in the past. Let me explain. Most people are used to the F1 thru F12 keys across the top of their machine. Gamers use these almost religiously in pretty much every game out there. Keyboards with the F-Lock key however, have Help, Undo, Redo, New, Open, Close, Reply, Fwd, Send, Spell, Save and Print as the MAIN function of those keys, not the usual F Function keys (for example, F5 is almost always Refresh, however if you press F5 with the F-Lock enabled, you’re going to send the command to Open a File).

In the past, there was no way to configure the F-Lock key to default to the Function commands â€“ however I’ll let you know later on if this IntelliType software included has been updated to address this issue. If not, I’ll be visiting the F-Lock Key Eliminator site yet again.

The keys are quiet with the exception of the space bar, which does not seem sound-padded at all, and is getting a little annoying. (ok, by the end of this review it was A LOT annoying). It’s one of the most pressed keys and it should be the quietest. I did find a bit of a dampening of the CLACK sound when the keyboard was raised in the front, but not an appreciable difference.

It quite honestly makes me want to open the back up and find a way to pad the space bar myself. I know it probably sounds trivial, but someone on the next room can’t hear any of my keystrokes except the space, and just look how many times that’s been hit in just this paragraph!

There’s something missing from this keyboard I just noticed. Lights. And I don’t just mean the backlighting of the keys that can be helpful, I mean notification lights with regards to the status of your Caps-Lock, Num-Lock, and in this case F-Lock. Not crucial because it is something that you can view on your desktop screen once toggled, but I find it an odd omission. The only LED indicator I see is the battery status, which I’m very happy to see. Previous versions simply stopped accepting the letter T then promptly died without warning after that.

Actually there’s something else missing, My Music. That and Calculator were the only buttons I used on the previous version. There are controls for the music itself, mute, volume, play/pause (missing skip to next track tho sadly) and while I know I can probably program one of the five blank buttons across the top, it just seems like another odd omission for a media keyboard, to leave off a quick link to, well, media.

Ok that rant over, lets look at the mouse.