If you have a media PC, chances are you are looking for the perfect keyboard and mouse to compliment it. Microsoft’s prime offering is the Wireless Desktop 7000, which uses Bluetooth technology and is perfectly suited for Windows Vista.

Media PCs are the new black. Just a few years ago, many people would not have dreamt of having a dedicated computer in their living room for the sake of watching media, but it’s certainly commonplace now. Because of this, the market for media PC accessories has literally exploded. Techgage has taken a look at many such accessories in the past, and you can expect many more in the future.

Because of the growing tech lifestyle and consumers using their PC’s for anything entertainment wise, there are countless keyboards and mice designed specially for the purpose. Although most keyboards would fit the bill fine, media keyboards are designed differently. Normally, they are light, offer many media-related buttons and are also wireless. Today’s keyboard and mice combo are also designed with Windows Vista in mind. No, this does not mean the keyboard will break halfway through testing, but rather that a few of the buttons will activate Vista-specific features.

The Wireless Entertainment Desktop 7000 consists of both a mouse and keyboard, the Wireless Entertainment Keyboard 7000 and Wireless Laser Mouse 8000. You will soon find this out yourself after purchasing the desktop, as you need to specify both during the setup. Both the mouse and keyboard utilize Bluetooth, which I normally find to be hit or miss, but my entire experience with the connection and setup with this set has been fantastic.

But, there are two other features about the set that I am not so keen on, but the reasons are completely personal. The keyboard is “ergo-approved”. While not purely ergo by some standards, it has a comfort curve that anyone who enjoys ergo keyboards should enjoy. It’s nothing major though, as I found myself becoming more comfortable with it after just a few minutes. This entire review was written with the set, and I didn’t slap my head out of frustration once. I still prefer a normal keyboard any day, however.

Another gripe I have is against the ambidextrous mouse, which again, is a personal issue. I have never used such a mouse that I found comfortable, but many people disagree. If you are left handed, it’s probably a sure thing that you will enjoy the mouse, because I have yet to find a left-handed person who disliked ambidextrous mice. Feel free to call me out in our forums. If you are used to Microsoft’s or Logitech’s contoured mice, ambidextrous is always a learning curve.

Here, you can see everything that is included, excluding the small manual and driver CD-Rom. The keyboard is wireless, therefore it requires four AA batteries, which are included. The other battery is for the mouse, as it’s rechargeable. 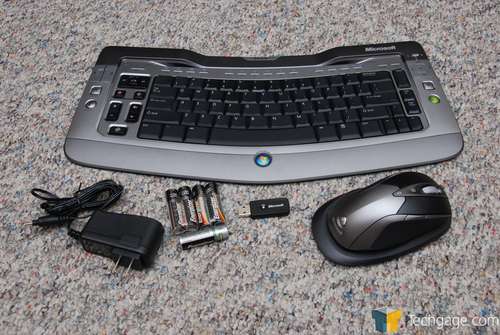 Let’s take a quick jaunt around both peripherals, so that you know what to expect should you pick up a set yourself. First stop is the noticeable blue Windows Vista orb underneath the space bar. This key acts as a regular Windows key, which by default raises the start menu. Odd placement, but it helps compliment the Vista scheme of things. 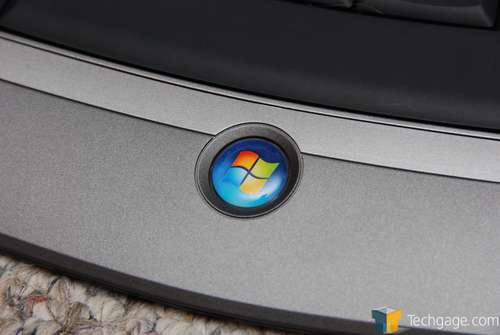 At the top right-side of the board you will find another Windows logo, which loads Media Center, if you have Home Premium or Ultimate Edition installed. Also here is a mouse, despite it looking completely inconspicuous. You can rub your finger around the OK square button to control the cursor on the screen, should you decide to set the mouse aside. This method works reasonably well, but it will never replace your mouse. It’s a last resort. 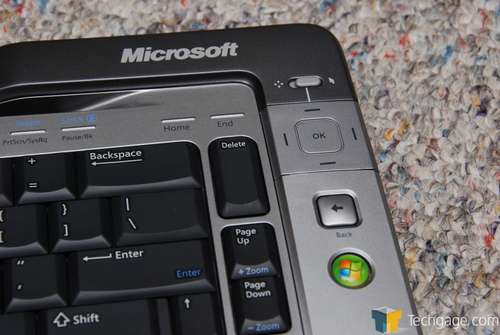 All keys located at the top of the board are not even keys at all, but rather touch sensitive buttons. You tap a button and it does what it is supposed to, without any audible confirmation, such as a key click. I prefer actual keys myself, but this method looks a lot better. 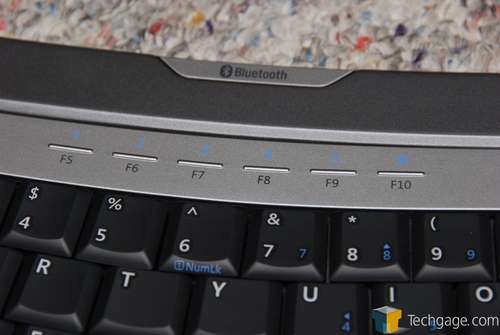 Let’s continue on to a look at the rest of the board, and then our final thoughts.