by Matt Serrano on December 25, 2007 in Peripherals

The long anticipated Wireless Entertainment Desktop 8000 is here, but does it impress? The entire package does a fine job of looking good while offering solid functionality, but we found it lacks greatly in a few key areas. The most notable being the price… at $300.

The Desktop 8000 provides an interesting look at what can be done with a simple keyboard. You can use this one device to do so many activities, from typing a document to controlling media. Other keyboards can provide the same functions, but the 8000 is designed with elegance and ease of use in mind for it particular task. It’s a universal remote for your computer, without having to change the batteries.

Yet sadly, I don’t think there’s going to be much demand for the product. Sure, it’s nice to have that universal remote that’s able to take control of everything you use, but more people are fine with having 5 or 6 remotes by their computer if it means saving some cash. 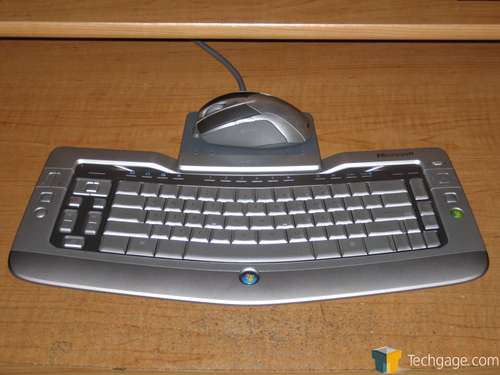 Looking at the product at the standpoint of a HTPC user, I would have to be pretty serious about my setup to even consider getting it. The crux is that the bundle is simply too expensive. I could see myself paying $50 for the mouse, and another $150 for the keyboard at most, but combining the two at $300 is simply reaching to me. The lowest price I’ve seen it is in the range of $230, which isn’t terrible, but still higher than I’d like.

As a day-to-day user, I would pass simply because I don’t think most users would find themselves using every single feature (meaning the rest of the money spent is wasted). You’re also encouraged to use Vista (or at most, XP Media Center Edition), even though both accessories will work under XP, the experienced is marred if you don’t.

Getting to the hardware itself, the keyboard definitely takes getting used to. I’ve never been a devotee of Microsoft’s blend of ergonomic and traditional keyboards. It’s somewhere between their Natural Ergonomic Desktop 7000 and a laptop keyboard. If it’s what you like, go for it. I don’t like the exclusion of a number pad and some buttons are in odd places. It’s not even trying to resemble the standard design.

I don’t have any major complaints about the mouse, but I’m not particularly fond of it either. It works OK, but little issues that I can’t really tag with the feel remain. I think if you’re a lefty you’ll appreciate it more than a righty would, but it’s not the end of the world.

Price is the largest barrier to entry here, and I’m confident it won’t last, but it is enough to sway me from making a purchase. It’s a useful device as it stands, but only for some people. I, on the other hand am perfectly capable with using a cheaper alternative.