by Rob Williams on April 3, 2007 in Peripherals

Microsoft recently announced an update to their Wireless Optical Desktop 4000 with the primary difference being updates for Vista and also the inclusion of a Laser mouse. We are taking a fresh look at this updated product to see if it’s worth your $80.

Now that Vistas launch has come and gone, we are beginning to see a lot more announcements for OS-specific products. Two weeks ago, Microsoft announced that they were releasing an updated version of their Wireless Optical Desktop 4000, the result is what we are taking a look at today. There are two primary differences between the “Laser” and “Optical” versions of the product. The first is that there are miscellaneous updates for Vista and also the mouse uses a laser sensor.

The base design for the keyboard remains identical, however. I have not used the previous model, so this one was going to have a slight learning “curve” because it’s “Ergonomic Approved”. I have tried ergonomic keyboards in the past and could simply not get used to typing properly with them. I was up for this challenge though, because the curve itself is not as large as “true” ergo keyboards.

On top of that, the mouse is ambidextrous, meaning left and right-handed people alike should enjoy it. Like ergonomic keyboards, I have never in the past enjoyed ambidextrous mice, so this one was going to be a challenge. Will I be converted?

As with most Microsoft hardware products, the 4000 comes in a bright red box plastered with product information. Though not pictured, the side of the box denotes that the keyboard is Apple friendly, so all you Mac users can use the product without issue. I won’t bring up the fact that they completely ignored all Linux users again. Oops! 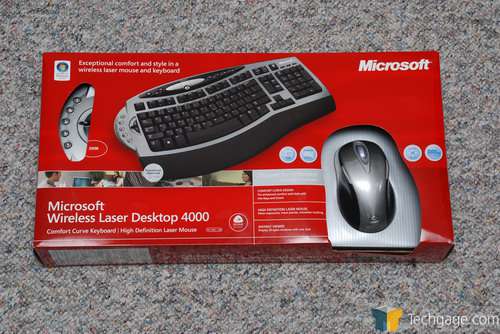 The keyboard has a black and gray color scheme, and looks sharp overall. One thing that caught my attention fast was the arm rest. It’s not a hard plastic like most other companies include, but rather a soft leather like material… that has a spongy feel to it at the same time. Hard to explain, but it’s nice to see. 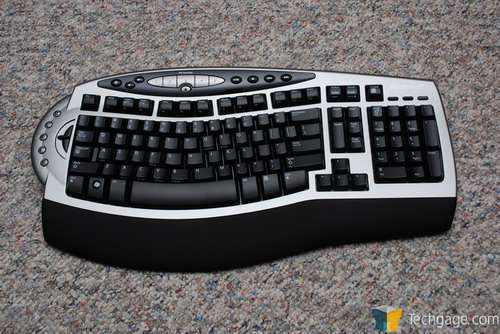 On the left side of the keyboard you’ll find a few function keys. From bottom to top we have the Web/Home, which simply opens up your primary web browser as you’d expect. Gadgets is a Vista exclusive, but I’m confused as to it’s actual usefulness. If the windows Sidebar is closed, pushing this button will open it. That’s it. Pushing it again will do nothing. If this button closed it as well as opened, it would make more sense. 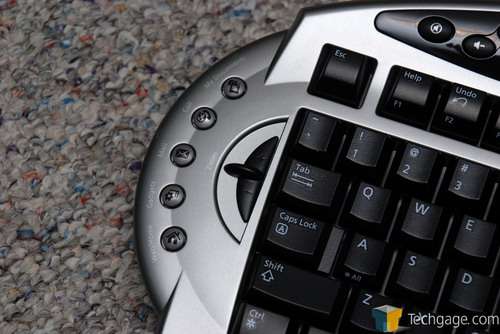 Mail and Call both open up Windows specific applications, Windows Mail and Windows Messenger. Lastly we have the My Documents button which is self explanatory. The zoom feature is one of the best on this keyboard in my opinion. It explains itself really, but you have the ability to slide it up or down to zoom in and out on a webpage or photo. Many keyboards instead just have buttons for accomplishing this, but a slider makes it feel more natural.

Up top we have the usual slew of media shortcuts including video or music playback buttons. The “My Favorites” keys are shortcuts to anything you want, whether it be a certain file, application or game. The little Star button below these brings up the dialog to set up these keys, which I will touch on shortly. 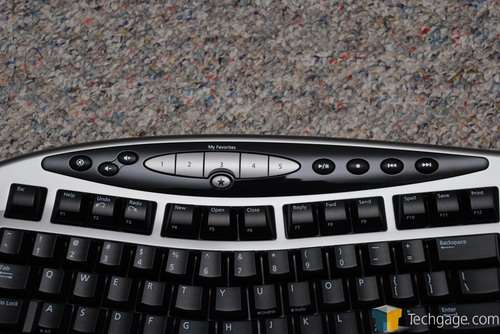 There are three buttons above the numpad, and though difficult to read in a photograph, they are Calculator, Log Off and Sleep. I am a personal fan of the Calculator shortcut on media keyboards as I reference it often. 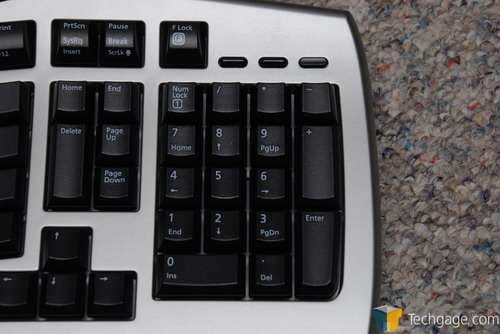 Here are a closeup of the keys and arm rest for those interested. With a closeup, I’m hoping it will be easier to understand it’s texture. 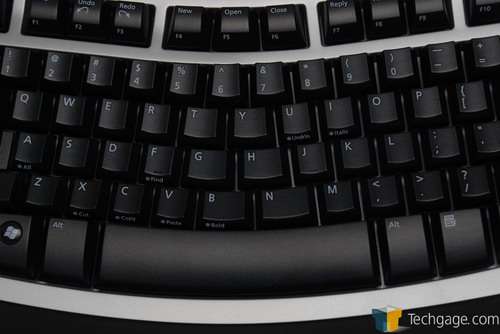 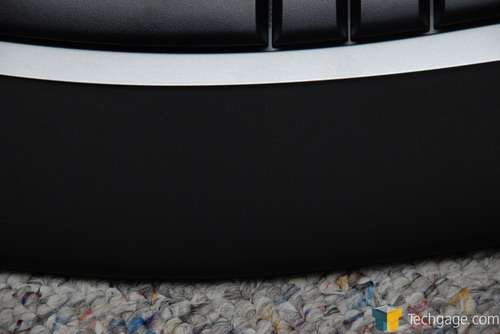 There is not too much happening on the back, but there are two large kick-stands that heighten the keyboard to a comfortable angle. 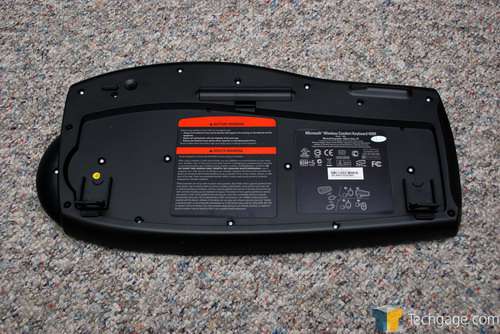 The Wireless Laser 5000 mouse is included, which I am not personally fond of simply because it’s ambidextrous. It’s not a knock against the mouse itself, I have just never used such a mouse that I felt comfortable with. 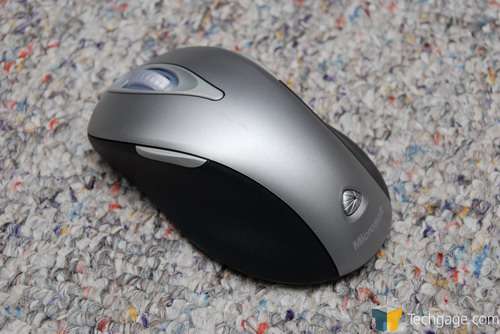 The reason I am not a fan is because while using them, the index and ring finger on my hand always touch each other and it becomes annoying very quickly. If you have the same problem, this mouse will not be for you. I believe I am in the minority however, as many people do enjoy ambidextrous mice. Razer, who is a huge developer of gaming mice only made ambidextrous mice up until their recently launched DeathAdder. That success is not for nothing, which is why I assume I am in the minority.

The mouse as it stands looks great.. I love the scheme. It’s gray down the middle and black on each side, similar to the keyboard. There is a thumb button on each side of the mouse (not to say you have two thumbs on one hand) as well, for whatever action you please.

I really liked the scroll wheel on this mouse. It’s not a hard plastic like on most mice, but rather soft rubber. This might seem weird, because it is. But after using it for a few minutes, I come to prefer it over other mice I’ve used. It was still not without problems though, but I will touch on this in the software section. 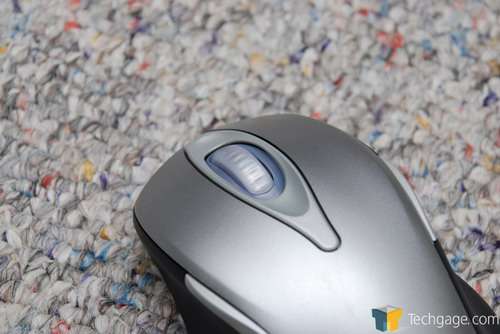 Underneath we can see that not much is going on, but we wouldn’t really expect otherwise. The feet are a tad on the rough side, so this is not for your fast paced gaming. 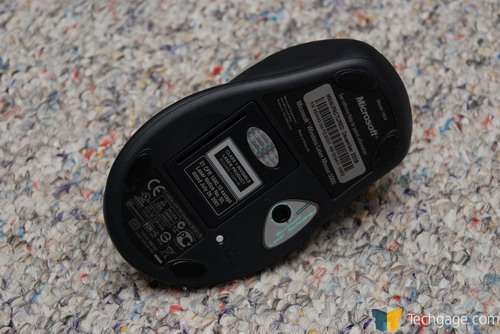 The included base is simple, but gets the job done. It has a connect button on the surface, and also indicators for Caps Lock/Num Lock and F Key. Microsoft was also gracious enough to include four AA batteries. 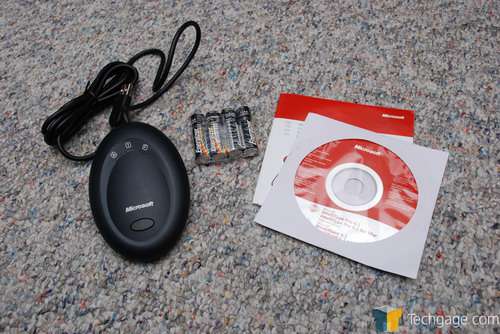 With that out of the way, it’s time to install and test them out.