Didn’t think that it was possible to push another model into NVIDIA’s mid-range line-up? Well, the company has proven you wrong, with the help of its GeForce GTX 560 (non-Ti). As it appears, the GTX 560 card, like its older brother (GTX 460), is set to see multiple releases, to help fine-tune the choices as well as can be to help precisely match your budget.

With its GeForce GTX 460, we saw NVIDIA target the different variants at the same kind of gamer, but tweaked them here and there to make sure that people got just the card they wanted, and for the price they wanted to pay. If there had to be a rhyme or reason to the GTX 560 non-Ti’s existence, that would be it. It’s similar to the Ti version in many ways, but costs a bit less.

Of all the cards in NVIDIA’s current line-up, the GTX 560 is special in that there doesn’t exist a specific set of specifications for it. Rather, the company provides a general guideline of officially-supported clocks, so it’s up to vendors to tweak their respective cards as they need to, in order to cards are at more than one price-point. At the end of the day, however, it’d be unlikely to see these clocks affect the price more than ~$15 from top to bottom. 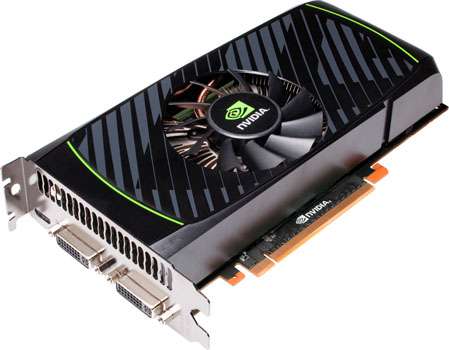 Let’s take a quick look at the major differences between all of NVIDIA’s current line-up:

There might be dual GTX 560s in NVIDIA’s line-up, but the aging GTX 460 is still considered to be “current” by the company’s standards. While this does give gamers a lot of selection, it’s never been more difficult to figure out which GPU is the best match for your hard-earned cash.

The non-Ti GTX 560 is 1:1 architecturally with the Ti version, with the differences being the chopping off of 48 CUDA cores and also the varying clocks. While “reference” could be considered 810MHz Core, 1620 Shader and 4004MHz Memory, it’s hard to settle on. In our first glance of available GTX 560 cards at e-tail, few shared those clocks, while the rest were all over the map.

The MSI “Twin Frozr II” variant that we’re looking at here today is one of the highest-clocked offerings on the market, with a 870MHz core. The only competitor to top that is ASUS with its DirectCU II TOP edition, offering a staggering 925MHz Core. As always, there are price premiums for these “overclocked” cards, and because prices on any of them can vary from day-to-day, patience is a virtue when it comes to hopping on your favorite e-tailer to order one.

Price-wise, the leading competitor to the GTX 560 is the $190~$200 Radeon HD 6870 1GB from AMD. Across our games and synthetics we’re testing with today, we hope to gain an idea of which would be the best match for most gamers.

While MSI offers a GTX 560 with rock-bottom reference clocks, the card we were sent is of its “Twin Frozr II” variety. It features a very beefy cooler for optimum cooling power and a sharp design. It’s not as “blingy” as some of the other GPUs on the market, but we’re sure this was a consciousness decision on MSI’s part, as it’s one thing to set it apart from the crowd. 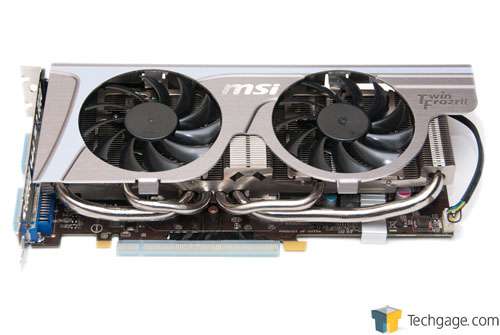 MSI states that the dual-fan design employed here improves airflow by 50% over the reference design (pictured near the top of this page), and that its robust 4-pipe “SuperPipe” heatsink with copper base will help deliver unparalleled heat dissipation. By looks alone, we’d say that the card has a good chance of living up to its claims, as it offers both a beefy yet modestly-sized cooler, and is open on three edges for reduced airflow impedance.

As with most of MSI’s GPU and motherboard line-up, this Twin Frozr II card has received the “Military Class II” touch, which results in it featuring Super Ferrite chokes, Hi-C capacitors and a 6+1 power phase design. What’s this all mean? Improved power efficiency, and of course, improved overclocking. 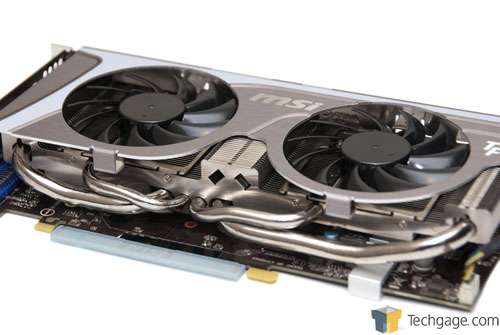 The cooler design as mentioned earlier features a total of four heatpipes and a long surface area covered with fins for efficient heat dissipation. Thanks to the numerous slightly-angled fins on the fans, lots of air will be pushed straight down through the fins and out the back, with some air potentially also leaving out towards the opposite end, thanks to it being open.

A growing trend across all manufacturers has been to keep protective covers on the PCI Express connection pins, and also covers over the video outputs. MSI is no exception here, but whether or not this fulfills a need that doesn’t exist, I’m not sure. I am doubtful many GPUs shipped in years past that have arrived dead where protectors like these would have saved them – but I could be wrong. EIther way, they are a nice touch. 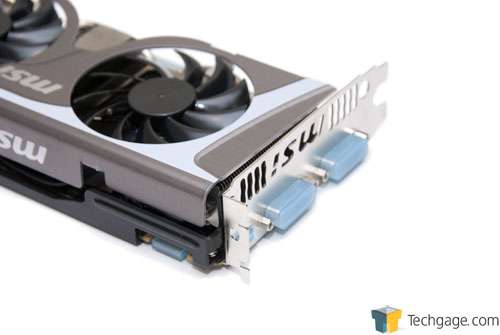 Before moving onto our test results, there are a couple of things I need to mention. First, we’ve benchmarked this card only using the specs that it came equipped with. We did this because NVIDIA doesn’t have real reference clocks, and all of the cards we’ve seen up to this point have been all over the place clock-wise.

This was not a card I was looking forward to benchmarking and writing about, because if we don’t have true reference clocks to, ahem, reference, then it makes coming up with conclusions a lot more difficult. Of course, NVIDIA knows this, and I’m sure it’s some of the reason the GTX 560 includes wildly varying “official” specs.

If weeks or a month passes and we can get a greater understanding of what most gamers will be picking up off the shelf – as in, which clocks receive the majority vote, then we will return to re-benchmark the card at those clocks.

Our benchmarking the card as-is will result in one anomaly: it’s super-comparable to the GTX 560 Ti. This is a well-known fact and one that NVIDIA is fine with. After all, the multitude of options is a good thing for gamers, right? Who’s to complain about something like that?

Aside from that, we were also forced to drop StarCraft II from our testing, due to it being unable to update itself. This was a repeatable problem (after a complete system reimaging), and though the game gave us an option to do a complete reinstall, I wasn’t about to go that far. We’re soon to upgrade our entire suite and will be adopting another RTS in its place. For the most part, StarCraft II hasn’t proven to be a great benchmark to begin with, so as far as we’re concerned, a replacement was inevitable. We do apologize nonetheless for having benchmarks from only four games, as it looks a little paltry at this point.

With that all said, let’s peruse our testing methodologies, and then tackle our results.