With all the scores now on the board, it was time to calculate the winners for the event. Don’t forget, the final scores are weighted with SuperPI 32M being 40% and 3DMark11 being 60%. 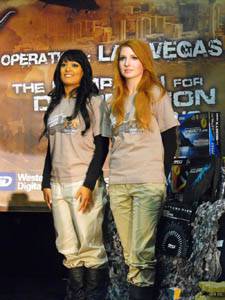 3rd place was a close race between I213 Xtreme (Rbuass and Fugger) and Team PURE (G H Z and Gautam) with Team PURE taking the third place award with a combined score of 154.512%. 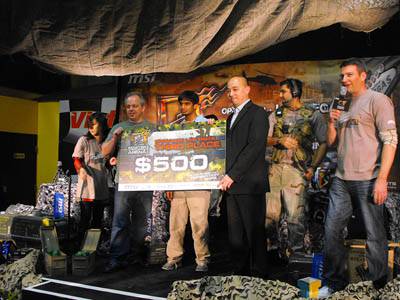 Over The Edge (Patch and Dentlord) earned 2nd place honors with their dominant performance in SuperPI 32M, leading the benchmark from start to finish of the round. In 3DMark11, Over The Edge finished in 4th place with a score of 8893 (88.635%) to bring their combined score to 156.465%. 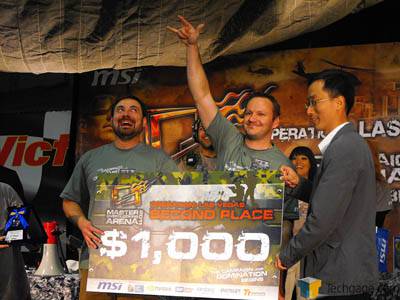 1st place was well earned by OCAlliance (Splave and Romdominance). They smashed the current world record for 3DMark 11 and finished 2nd in the SuperPI 32M, posting a combined score of 158.696%. They have now earned the opportunity to represent the Americas at the MSI Master Overclocking Arena 2011 Worldwide Final in Taipei. 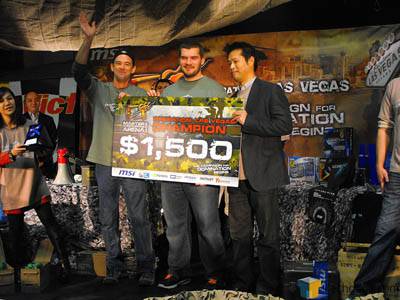 Although MSI MOA 2011 is very competative, the amount of respect the overclockers have for each other is evident throughout the event, with teams sharing overclocking tools, laughs and even in some cases advice. The participants are truly professionals in this field and it showed from the start of the event right through to the awards ceremony. Splave and Romdominance will represent the America’s at the MSI Master overclocking Arena 2011 Worldwide final and that was truly earned today.