It’s been about six months since AMD launched both the Radeon HD 6970 and HD 6950, and at its given price-point, not much has changed since then. As it seems, the market is not going to be changing too much until later this year, either, when AMD plans to launch its Southern Island GPUs.

One thing that has changed since the HD 6900 series launch is pricing. While the HD 6950 at launch retailed for $299, today many can be found for as low as $240, and with a mail-in rebate, that price could be dropped even further. MSI’s Twin Frozr III edition retains that original $299 pricing, however, so our goal here is to see if its premium is justified.

The full product name is ‘Twin Frozr III Power Edition’, which represents a couple of things. First, it utilizes a robust cooler that sets out to be as efficient as it is quiet. Yes, those claims are touted about pretty much every non-reference card, but as our testing has proved, we can see this card means it.

“Power Edition” refers to the fact that the entire power circuitry has been taken into consideration for the ultimate in efficiency. It features voltage control, a 6+2 power phase design and improved stability. Great for the clocks given, and effective at handling your overclocks. 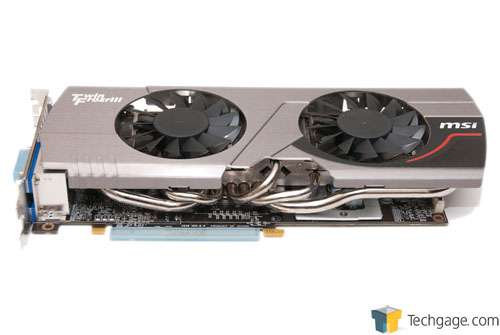 According to MSI, the Twin Frozr III cooler makes this card about 11°C cooler than the reference design (we found it to be even better), and 13.9dB quieter. It’s a high-end card that could be shoved into a SFF chassis, essentially, and in using the card that way, you shouldn’t have to worry about anything while enjoying your high-end gaming experiences.

As always, a quick refresher of AMD’s current line-up:

Added to this list from last time are AMD’s HD 6770 and HD 6750 graphics cards, which haven’t quite caught on to a large degree up to this point. We do have an HD 6770 model from Sapphire in the lab however, and though we haven’t properly reviewed it yet, the results from our testing is reflected in the charts here.

MSI has made sure its Twin Frozr III edition isn’t some ordinary HD 6950, though. The clocks have been boosted +50MHz on the core and +100MHz on the memory, putting it almost on par with the HD 6970 in terms of raw performance. As the HD 6970 still features more cores, however, it will still have a considerable advantage. 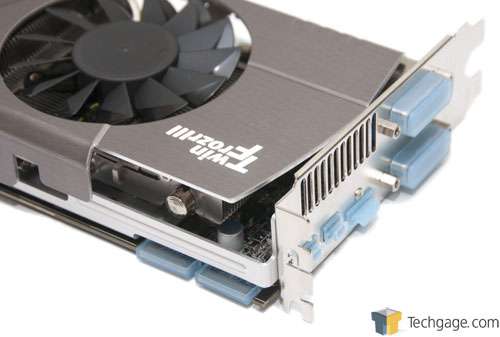 Pictured at the top of the page, you can see the card utilizes a rather laid-back aesthetic. It’s not meant to stand out, but rather just be effective. I’m not sure which company manufactures the heatsink used here, but it reminds me of Thermalright’s designs, and in all regards appears to be built with absolute efficiency in mind.

The shot above showcases MSI’s care in making sure you receive the card in good working order. Every single connection that exists on the card comes with a blue plastic cover, and these are recommended to stay put for ports that are not being used, just to keep the dust out. The card, like the reference design, also features a dual-BIOS switch, but that’s located nearer to the other end.

Due to a lack of time (or energy, you be the judge), I decided to take a side-view shot of the card rather than take the entire cooler off. In looking at it from this angle, it’s easy to understand the design and its goals. Overall, easily one of the more effective-looking designs I’ve seen in a while.

As another one of MSI’s ‘Military Class II products, the Twin Frozr III edition features Hi-C capacitors, solid capacitors and also Super Ferrite Chokes. Combine all this with the already impressive power design, and this card means business, and is technically much more impressive than the reference design.

There have been five driver releases since we last benchmarked the HD 6950, so it will be interesting to see if overall performance can put MSI’s card closer than ever to HD 6970 levels. Let’s check it out.