Let’s get right to the good stuff. MSI’s Twin Frozr III, where HD 6950s are concerned, is impressive. It has a lot of technical bits to impress, and with its built-in overclock, it even manages to sit behind the Radeon HD 6970 more often than not. It also surpassed the GTX 570 in almost all of our tests, and that card has to take advantage of mail-in rebates in order to come close to the same price.

Due to time-constraints, I wasn’t able to put time into overclocking, but with all of what this card packs in, I’d imagine that there’d be few other cards quite so capable of pushing ridiculous clock speeds. It’s not just the fact that it includes a 6+2 power phase design, but also the fact that it uses higher-end on-board components and with the Afterburner software, lets you fine-tune three different voltages; GPU, memory and VDDCI.

Does all of this add up to a “must-buy”? At $300, that’s a difficult question to answer. At Newegg, there exist top-brand HD 6950s that are selling for around $240 ~ $250, which you could easily purchase and overclock yourself. While you may not reach the top-end clocks that this card should be able to, that may not be quite so important to you. 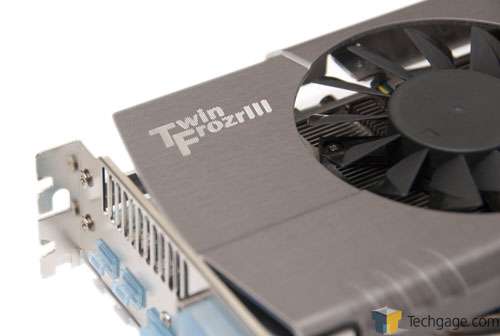 What impressed me most about the Twin Frozr III wasn’t its overclock or fancy power design, but rather the fact that it’s quiet. So quiet, in fact, that it may actually be one of the quietest GPUs I’ve ever tested. With most of the room noise turned down or off, I booted up and listened intently to the GPU. I could hear air movement slightly, but it was totally drowned out by the other hardware in the PC (especially the hard drive).

As I cranked up a 3DMark 11 Extreme run, I could barely hear the card get any louder. It did, but to actually notice it was tough – again, in relation to the other components. If you have a 100% silent PC, you may hear the differences a little easier, but in a regular PC with the door on, you may be hard-pressed to notice it at all, even with a high GPU load.

For this reason, and also the fact that the cooler kept the temperatures so low overall, this would be an ideal GPU for a high-end gamer to put into a SFF chassis. I wouldn’t expect the ~60°C temperatures to remain in a smaller enclosure, but you’re unlikely to get another solution for this card that can perform quite this well.

I can honestly say that if I were building an HTPC or SFF PC, or even a PC with an ATX chassis, and wanted to pick up a GPU that both offered high-end gaming capabilities and still managed to run quiet and retain good temperatures, I’d choose this card without hesitation after having used it. If I were to purchase an HD 6950 for a regular chassis and didn’t mind the louder noise, I’d go with a lesser-expensive version, since $50 is not chump change. For a long-life and reliable card, however, MSI has a good thing going with its Twin Frozr III.