by Rob Williams on August 3, 2012 in Motherboards

If you’re looking for a good Z77 motherboard to pair up with that shiny Ivy Bridge CPU but don’t want to break the bank, MSI’s Z77A-GD55 is well worth a look. Despite its modest $165 price-tag, the GD55 offers a rich feature-set, looks good, has a robust EFI and even makes overclocking easy for those who don’t care for the manual route.

As is obvious I’m sure, we haven’t been tackling motherboards on the site much at all the past while, but things are changing. We have many boards lined-up here and are ruthlessly benchmarking them to see which one rules the roost. To kick things off, we’re tackling the first Z77 board we received way back prior to Ivy Bridge’s launch, MSI’s Z77A-GD55.

MSI offers many motherboards based on Intel’s latest chipsets, with seven equipped with the enthusiast-grade Z77. The GD55 model we’re taking a look at here sits just below the GD65, and aims to be the “whole package”, while remaining as affordable as possible – and at ~$165 USD, it’s a compelling offering.

For starters, the board sports MSI’s “Military Class III” features, which includes Hi-c capacitors, “Super” Ferrite chokes and solid capacitors. These components are similar to those used in military equipment, so I believe that means you can either control missiles with this board or that it can withstand being run over by a tank. Or, as a third idea, it could also mean it’ll have a long-life, regardless of the stress it endures. 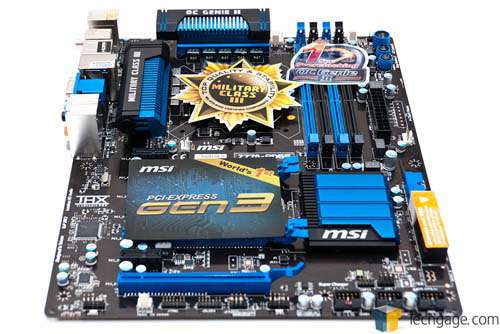 I normally take just one overview shot of a given motherboard, but since this one was so “stickered out”, I felt compelled to include a bonus shot. As you can see in the shot above, MSI draws attention not only to the Military Class III feature-set, but also the one-step overclocking button and PCIe 3.0 slots.

Remember when $150 motherboards used to look bland and boring? I’m sure we’re glad those days are long gone! MSI arguably delivers us one of the best-looking boards out there. The PCB is a dark brown, not black, and most of the on-board components are either blue or black. Overall, nice aesthetics and a clean design.

For fans of efficient cooling (yeah, yeah), MSI provides 3x 4-pin and 2x 3-pin fan headers on this board, all thoughtfully placed. One 3-pin is found to the bottom-left of the board, so fans that have cords wrapping around the back could come up and around to be plugged in, with the other being up top near the main CPU fan header. The others are found next to the DIMM slots and also next to the CPU socket. Regardless of your cooling configuration, you should have no trouble being able to plug everything in without hassle. 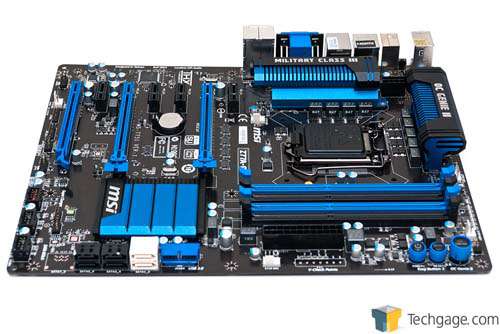 Let’s take a tour around the board, shall we? At the bottom-right corner we see a total of six SATA ports (two are 6Gbit/s, driven by the Intel chipset) and a vertically-placed USB 3.0 header (the first time I’ve seen this; it’s a nice touch). At the bottom are three USB 2.0 internal headers and moving towards the left you’ll have access to lesser-common headers, such as chassis intrusion. 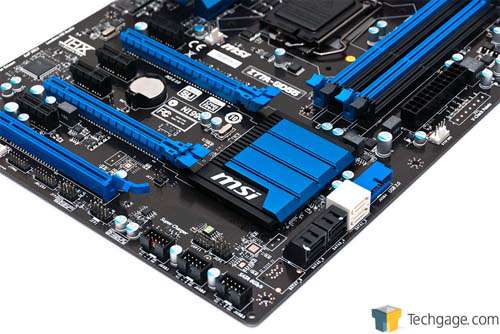 Looking towards the top-right corner, we see a power and reset switch (nice to see on a board of this price-range) and also the OC Genie button. This button, when pushed, auto-OCs the CPU to about 4GHz – to our knowledge, regardless of what model it is. In this same pic we can see SFC (ferrite chokes) scattered around the DIMM area, and then in the distance surrounding the CPU socket. 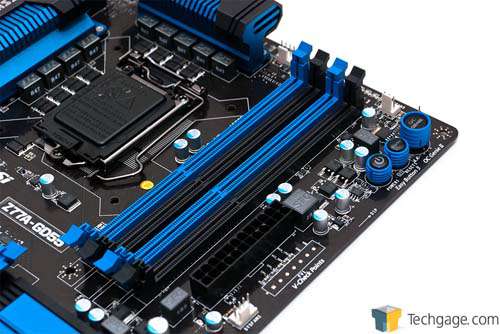 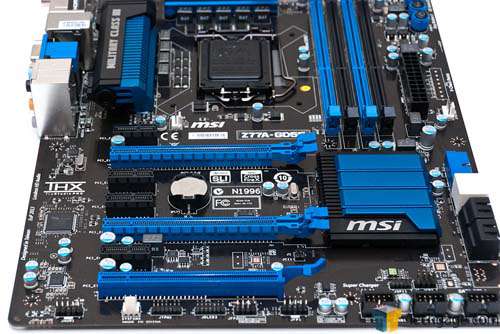 Taking a look at the CPU socket area, we can see that MSI’s goal was to keep things as neat a possible, and it’s done a great job. 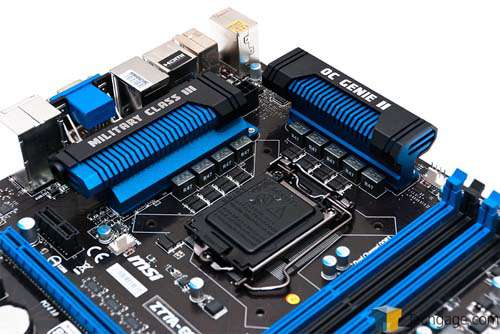 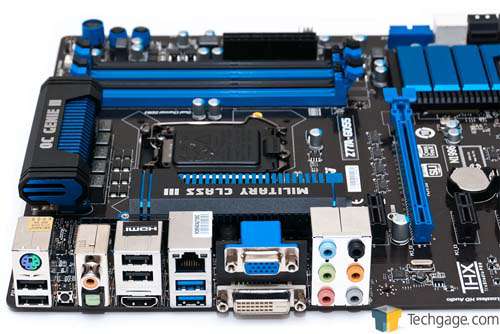 Not a whole lot has been tossed into the box, but it’s still sufficient. We have four SATA cables, an SLI bridge connector, small ATX chassis connector helpers (ASUS must be pleased at this rip-off of its Q-Connector), back I/O guard and various documentation. Some motherboard vendors claim their boards use high-quality components, but MSI includes a certificate solidifying the fact. 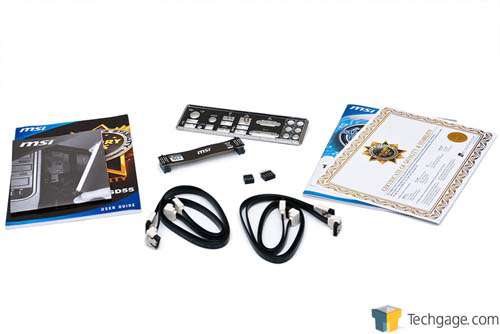 Overall, MSI’s Z77A-GD55 is quite an attractive offering for its price-point of about $165. The board looks great, has a sufficient amount of connectivity USB+SATA wise, includes five fan headers in convenient locations and for those who don’t like to overclock but wouldn’t mind a small boost, a button that can be pushed and forgotten about.

Can the board’s EFI match what we’ve seen so far? Let’s check it out.