Ok, well since these modules use Mosel chips, I knew I had a better chance of winning the lottery than actually finding success in overclocking these. I don’t even play the lottery! At any rate though, I was definitely up for the challenge and looked forward to seeing if I could squeeze any extra performance out of them. 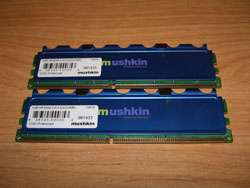 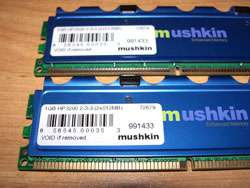 After running an 8 hours session of MemTest 1.60 at default speeds, no errors were brought about so the fun of overclocking could begin. One thing I quickly found out, was that lowering the trcp and trp to 2 was not going to happen. At default speeds, I tried to run 2-2-2 as opposed to 2-3-3 between 2.6 and 3.2v and the computer would simply not get past POST. Max overclock I could hit at default timings was 210, or DDR420 speeds.

Knowing that 2-2-2 was not going to happen, I had no choice but to up the CAS latency to 3. In my opinion, CAS3 should only be seen on 1GB modules, but if we are lucky then CAS3 will not affect our bandwidth acheivements. Going from 237Mhz to 240MHz required a nice 0.4v increase! I was not willing to go above 3.2v at this time, due to having no additional cooling.

These modules are not marketed as being overclocking friendly nor do they offer enthusiast performance, hense the 2-3-3 timings. I actuality, considering these are Mosel based modules, I did manage to bring the overclock further than I actually expected. If they chose Infineon 5B or something similar to use instead of Mosel, it’s unlikely that overclocking would have been more of a success. Overall, these were a challenge to tweak, but turned out pretty good.

To benchmark these modules, I used both EVEREST Ultimate Edition and SANDRA Lite and their included memory related tests. I used all of the successful overclocked settings during these tests. Let’s begin with a look at the EVEREST read and write tests. 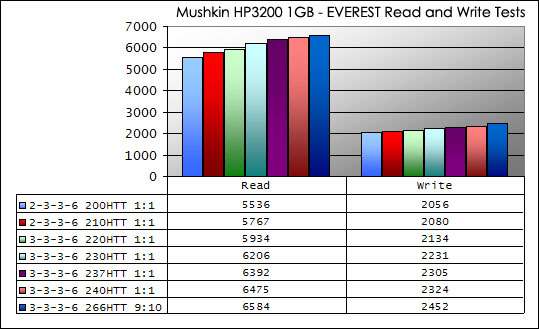 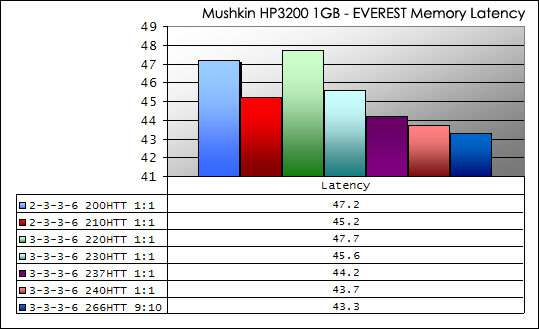 We can immediately see that being forced to switch to CAS3 didn’t exactly help our latency benchmarks. Even still, they kept up to the compeitition just fine in this regard. I couldn’t help but imagine how great these modules would be if they had more favorable chips.