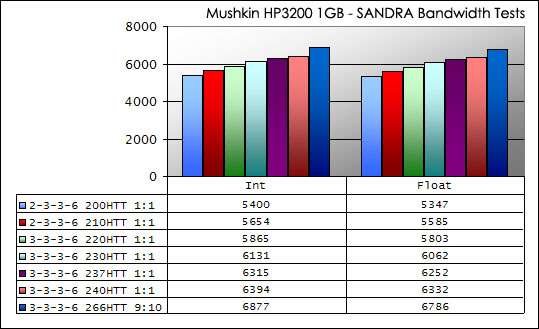 The SANDRA tests impressed me more than anything about these modules. The stock speeds compete with previous PC3200 modules we have looked at, which says a lot considering these timings are more loose. Further up the scale though, at 240HTT, the OCZ Gold XTC score slightly higher due to it’s tighter timings, but beats out our Ballistix even with it’s 2-2-2 timings. Overall, these Mushkin modules definitely hold their own here.

After I completed all of these benchmarks, it was time to move onto gaming benchmarks. I started running 3D Mark 01 on each overclocked setting to first see if the memory was stable overall for gaming. This is where I found out that these modules don’t allow gaming at anything past DDR440 speeds. Anything higher, and the benchmark would actually cut off half way through with a graphics driver error. I played Counter-Strike: Source at the DDR440 speeds though, and it worked no problem, but anything above that would just not cut it. Since these modules have no real overclocking value, I did not bother with a gaming benchmark because there would not be enough results to justify one.

When I first received these modules, I had to bear in mind that they are value sticks, so I treated them as such. Although the modules are value, they seemed to surpass a few other PC3200 modules that I have looked at in the past, despite them having weaker timings. This is actually a great thing if you wish to buy modules and not overclock them at all; you’d be set. As mentioned earlier, at stock speeds these modules have the advantage over the Ballistix at the same speeds. The newer OCZ Gold XTC modules are ever so slightly faster at stock speeds. 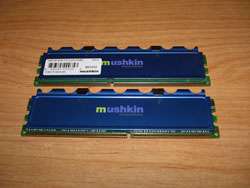 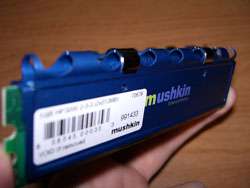 As value modules though, the HP3200 are superb. For someone who doesn’t plan on overclocking, these offer great performance for the price point. Of course, as I tend to mention in every 1GB review, the 2GB era is here and that’s where I recommend most people look. Even if you currently own a 1GB kit, adding another will force 2T timings, and 2GB kits are just so affordable now, that there’s little reason to stick with 1GB now. If 1GB is your thing though, you will not go wrong with these modules, just don’t expect to be overclocking!

Because these are value modules and are marketed as such, I am awarding the HP3200 an 8 out of 10. They have great stock performance and will please anyone who doesn’t like to overclock. As is becoming more popular nowadays, these modules also pack a lifetime warranty once you register them.

If anybody out there has had some success overclocking Mosel, please let me know how you succeeded! I will continue to play around with the sticks and see if I can push their performance far enough to be able to game above 220 HTT.

If you wish to discuss the review, feel free to leave a comment in our related thread. You do not need to register in order to post in our content threads!