With C2D and AM2 out, many are looking for the right DDR2 kit to choose. If you are on a budget, then you will want to check out the Mushkin EM6400, which retail for around $200. Though they are surrounded with a ‘value’ cloak, they deliver surprising overclock-ability.


3D Mark 01 is considered outdated for a good reason. It is. One great thing it’s still good for though, is seeing how your CPU overclock scales. I like to pay more attention to PC Mark though, since it’s benchmark is completely memory specific.

It’s unknown to me why the first two ’01 results are far apart, as that version of 3D Mark is extremely CPU dependent. Though 280FSB proved the best for PC Mark, it fell short of 270FSB’s result for 3D Mark. However, PC Mark is a more reliable benchmark here, because the test targets the memory specifically, whereas 3D Mark obviously does not. 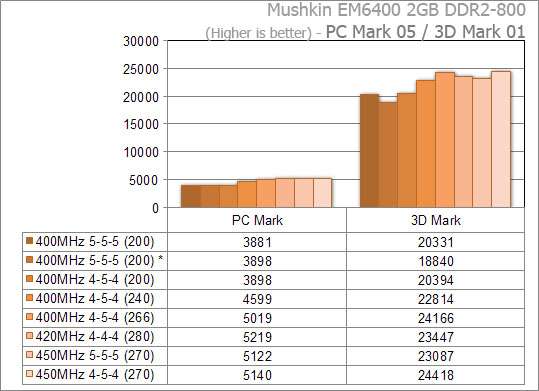 Super Pi, like 3D Mark 01 is good for seeing how your CPU overclock scales. The primary benefit is that it does just that… but quickly, especially if you only run the 1 Million method. Memory plays a big part in the results though. The tighter the timings, the faster the roundtrip for the data between your CPU and memory. 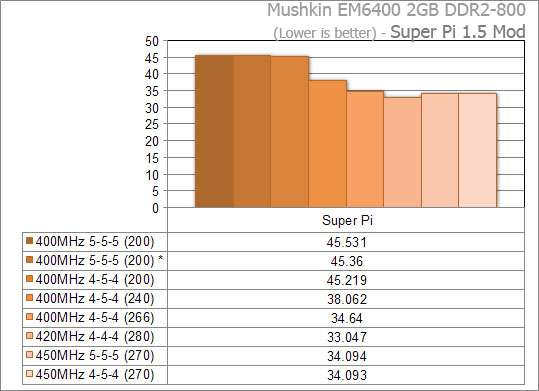 When I first received the kit, I was hugely skeptical I was going to go anywhere with it. It’s value… what can you really expect? It turns out, I ended up far more impressed than I imagined. It was really like a roller coaster ride earlier in the day. I was hugely upset because the memory was going -nowhere-, but once I realized it was just that troublesome tRCD, things really took off. The memory proved completely stable through a 200% MemTest for Windows run at 450MHz, 4-5-4 and also 32M Super Pi stable. For modules that showed no signs of overclocking, that’s impressive.

Compared to the OCZ SOE PC2-6400 kit, this one wins without a doubt. Sadly, I had no luck with overclocking with that kit, whatsoever. This Mushkin kit though, not only overclocks quite well, it also costs near $50 less than what I see the SOE going for. Looking around at some e-tailers, it’s somewhat hard to find the EM6400 kit in stock. However, after looking at some shoppes, it seems the absolute cheapest place to purchase the kit is directly from Mushkin themselves for $204. 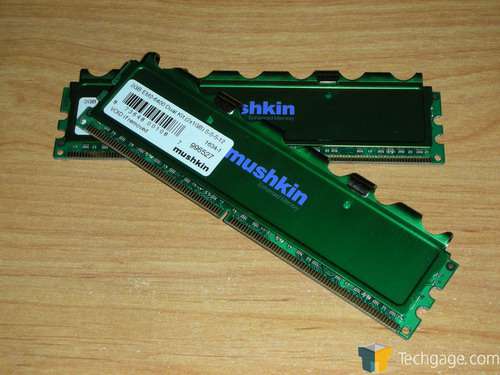 So, is the kit worth that $204? If you are on a tight budget and want ‘better than value’ memory, this is a good choice. Just bare in mind that the tRCD is going nowhere, but there is definitely some potential, especially if you don’t mind moving up to 2.2v. If you plan to do some heavy overclocking, then no these are not worth it. It’s obvious you want a kit with much more freedom, but you will have to haul more out of your wallet for them.

These modules are priced pretty good at $200US, and are right in line with the competition. However, you would not need to pay more than 25% more for a much more overclockable kit. If you are looking for a value kit with potential, I can recommended these ones. I am awarding the EM6400 2GB kit an 8 out of 10. Thanks to Mushkin for handing me a value kit that I was actually impressed by :-)