Because these are from Mushkins performance line, we should expect some great results in our testing. PC2-8500 is somewhat of an odd number, as it results in DDR2-1066 speeds, the same as Corsairs modules released earlier this year. As I mentioned, we are dealing with 5-5-4-12 timings, which is tighter than the standard 5-5-5-15 that I have seen everywhere else.

Mushkin recommends 2.2-2.3v for these and after initial testing I found that MemTest for Windows would only become error free with 2.3v. Depending on your hardware and luck, 2.2v may be quite feasible for you. Of course I didn’t keep stock speeds for very long. I first tested both DDR2-800 and DDR2-900 and also my theoretical maximum overclock of DDR2-1100. As mentioned in my recent memory reviews, my 4600+ is lackluster in that DDR2-1100 is the most I can push out of ram, since moving into the 2.80GHz area is sketchy, and will bring on errors in any benchmark after a long run. 2.76GHz on the other hand proves 100% stable, so I stick to it for our max overclocks.

I will be comparing these modules to my Kingston PC2-8000 and Super Talent PC2-8000 kits, which both use Micron D9GKX chips… the cream of the crop. These Mushkins however use the lesser binned D9GMH chips. The primary differences between each of these two chips is minor… one is clocked for 333MHz and the other for 400MHz. The GKX chips cost more and tend to increase prices of the end modules. This has not really been a problem lately though, as GMH and GKX is priced similarly on the market simply depending on the overall stock speed of the modules in question.

Both of these chips are amazing, there’s no question about that. So, don’t take my DDR2-1100 overclock as being the max capable. I am sure with a killer CPU, all of the modules I have around would be pushed at least to DDR2-1200 speeds, which is becoming a norm in the enthusiast community. That said, here are the settings I chose for benchmarking. 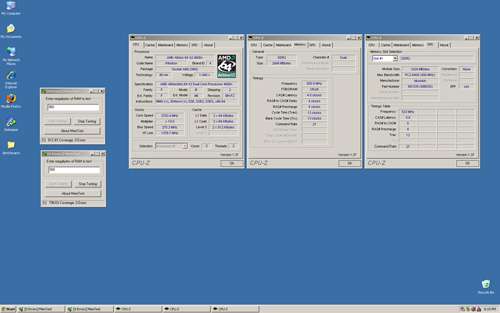 Regardless of what product we are benchmarking, our testing machine goes through optimizations before we begin. All testing is performed on a stand-alone version of Windows XP Professional with SP2. System services not needed are closed down, in addition to unwanted programs in the system tray. Computer is cleaned up of scrap files, which includes emptying of the recycle bin. Directly before any testing occurs, the OS hard drive is defragged using Diskeeper 2007 Professional. Finally, we assure that the computer has adequate cooling and airflow.

As I mentioned, I will be using also the Super Talent 2GB PC2-8000 and Kingston HyperX 2GB PC2-8000 for comparisons sake. The results from both kits were used from earlier reviews using the same setup. However, since the Mushkin kit uses a stock speed of 1066MHz, I re-tested that speed on both of these kits. As usual, since we are running all of the kits of ram at the same speeds, we don’t expect either one to come out on top. The goals are to make sure the modules in question can keep up to what’s standard.