Before we go further, I’d like to clear up some concerns regarding 4GB+ of RAM. The first thing to take into consideration is that you will need a 64-Bit OS, whether it be XP x64 Pro, XP Vista 64-Bit or some 64-Bit Linux distribution. I will be covering the reasons in an upcoming article, but simply put, 32-Bit operating systems cannot properly allocate all 4GB of ram. Even with 4GB installed, you will likely only see 3GB. Some lucky folks have been able to run in PAE mode to get closer to 4GB, but the OS will never address all of it.

That said, you really have no choice but to get a 64-Bit OS unless you want to waste cash. If you don’t want to upgrade to a 64-Bit OS, you could stick to a 3x1GB setup on your 32-Bit rig, which would still be better than 2GB if you are a big multi-tasker.

64-Bit opens up a new world as far as allocation to a given application as well. In WinXP, no more than 3GB can be allocated to an application at a given time, but on a 64-Bit OS, there is no such limit (that I have seen). I have had 3DS Max use close to 7GB in the past.

Overclocking modules of a high-density always proves an interesting experience. The lower the density, the better the overclock should be, although the performance at the same specs as a larger module decreases thanks to the lack of that density. 512MB sticks sometimes clock better than most 1GB modules and the same applies with 2GB modules as we see today.

Browsing through any e-tailer at their 4GB kits gives off the idea that performance and 4GB just don’t go hand in hand. Although PC2-6400 is market standard now, it’s not “performance” by most enthusiast standards. Especially with 5-5-5 timings. In fact, the only company to really throw 4GB performance kits into the mix has been Mushkin. I am unsure why nobody else has released similar kits, but Mushkin has been sitting pretty in that spot for a couple months now.

I need to praise Mushkin just for the fact that they managed to release a kit of these speeds. Either they scored an amazing batch of chips, or they are determined to be the best when it comes to 2GB modules. Many times, reviewers will receive “cherry picked” modules from the companies, so that they know their performance will be amazing. In the case of this kit, every kit is cherry picked. They have to be. You cannot just pick up a batch of chips and assume they will do DDR2-1066 speeds. This is why we are not seeing other companies release performance kits as such, I assume. Too much time is required, which is why the kits retail for a premium.

That said, how much further could 533MHz 2GB modules possibly be pushed? I was surprised to find out, quite a bit. Here are the final OC’d settings:

There you have it, a 2x2GB kit at DDR2-1200 speeds. Granted, this is with 2.5v, but the fact of the matter is, this was a completely stable setting as you can see below. 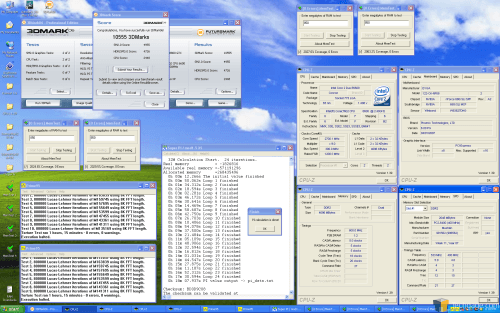 One interesting thing to note is that for DDR2-1000 speeds and higher, I needed to use a CAS latency of 5. All of my 2GB performance kits will handle that speed and CL 4 without an issue at all. Something about these chips makes that a non-possibility though. Even while pushing 2.5v into them with CL4, the computer would simply not boot up.

Also, the stock recommended voltages for the kit is 2.3v, however I found 2.2v to be fully stable throughout all of my tests. Upon clocking any higher though, 2.4v becomes a must, as you will see with our 575MHz setting. Luckily, bumping it up to 600MHz required only a slight boost in voltage, resting at 2.5v. I was lucky, as this is the max voltage that the eVGA 680i board will allow.

While on the subject of 680i, I have to stress that such a major overclock might only be possible if you own a 680i, if possible at all. Even though 600MHz was stable, I have a hard time believing that most kits out there will handle these speeds reliably. I could be wrong, but I have to remain skeptical since I have not seen anyone else accomplish an overclock like this, on any other 2x2GB kit. I’ve seen others hit 600MHz, but with a lot more voltage and a lot less stability.

That said, regardless of your top overclock, it should prove much higher than the stock setting of 533MHz. Also, despite 600MHz being stable here, I would not recommend it be used as a 24/7 setting simply because 2.5v is too much voltage. 2.3v and under is far safer and will prolong the life of your sticks. 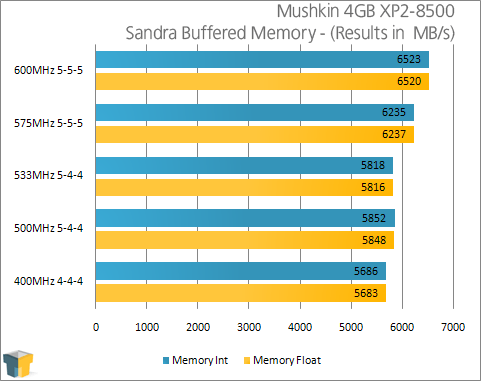 Because this is a 4GB kit, I expected to see slight decreases when compared to the same settings with 2GB kits, but it wasn’t the case at all. We actually see some very small increases, except at lower frequencies thanks to the CL5 that we were forced to use.