by Rob Williams on January 4, 2009 in Editorials & Interviews

Alright, so I’m a little behind on the times. Netbooks have been around for a while, but it wasn’t until recently that I’ve been able to spend a little more than a few minutes with one. With CES right around the corner, I decided to finally get one in and spend a week using it exclusively at the event. Read on for my initial thoughts.

When ASUS launched their first Eee PC in the fall of 2007, I don’t think too many people quite expected what was to occur within the industry afterwards. Since that launch, the “netbook” era exploded, and it became clear that interest in inexpensive and small notebooks was huge. This is proven by the fact that it’s difficult to keep track of who is and who isn’t developing a netbook nowadays.

Although netbooks have existed for a little while now, I’ve never spent much time with one in the past. I’ve used one here and there, but for only a few minutes at a time usually. Since CES is right around the corner, I figured now would be as good a time as any to get a netbook in and see how well I could “survive” with one for a week. To make sure that I really give the netbook a try, I won’t have a backup notebook.

The netbook I’ll be using is ASUS’ N10J, a model that caters more to the business user. At 10″, it’s similar to the ASUS 1000H, except that the shift key on the keyboard is in the proper position. In addition, an NVIDIA GPU is included along with an Intel one, in case you need more graphics power, or more battery-life. It’s an interesting option, to say the least. Battery-life with the Intel GPU lasts between 4 – 5 hours, which should pretty-much get me through a day at the show without much issue.

Being a Linux user, I wasn’t that interested in sticking to Windows on the netbook for the simple fact that I’m so used to applications I use everyday, that I wanted to feel at home, as it would increase productivity. The distro I chose to use was Kubuntu, for two simple reasons. First, I’m not a fan of GNOME, and second, Kubuntu has superb hardware-detection. 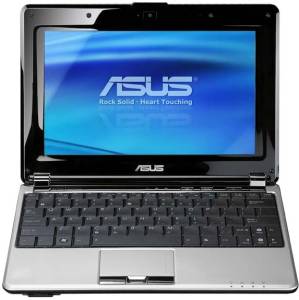 I chose to use the latest version of Kubuntu (8.10), because while I wanted to use KDE 3.5, I found KDE 4 to be a lot more stable (less lag) while running, which surprised me. This was a rather large trade-off though, because I’ve never liked KDE 4 and am not a fan of the direction it was taken. I figured spending just a week with it wouldn’t kill me though, so the choice wasn’t too hard to stomach.

The worst issue I ran into right off the bat was a non-operable wireless driver. The included WiFi card is the Atheros AR5007EG, and it’s a known issue with Kubuntu 8.10 for it to not function after the install. The fix was to install some backport drivers (simple task to take care of through Synaptic), and after a quick reboot, things were as they should be.

For the most part, performance is reasonable. Intel’s Atom N270 (1.6GHz) is capable of handling most simple tasks, and being that it utilizes HyperThreading technology, certain tasks are sped up simply because it thinks it’s a dual-core processor. According to the power manager software included with the install, the netbook uses about 5W of power at idle, which doesn’t seem so bad. During a normal workload, that goes to around 10W, and in my thorough tests, four hours on the included six-cell battery is a minimum, even with WiFi enabled and video viewing. 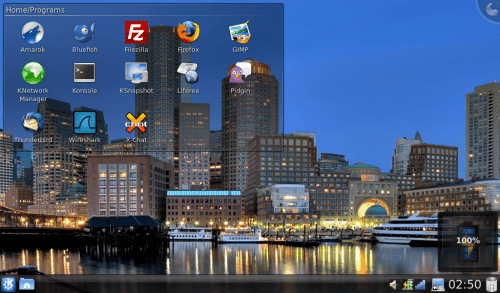 Speaking of video… the capabilities there are quite good as well. I tested out some downloaded H.264 720p video and it ran well, with no skips or lag. To save more on battery-life, I recoded those to the screens native resolution of 1024×600, which does surprisingly make a rather large difference in the overall file size, and also the battery-life I’d assume as well.

The resolution is something I’ll have to touch on though, because to me, it’s a huge problem with not only this netbook, but all of them currently on the market. If you take a look at the screenshot above or below, you can see just how “scrunched” things look. It’s much wider than it is tall, so it’s really a stark widescreen ratio (10:6). Before I received the netbook, I knew that the resolution was going to be lacking, but I figured I’d be able to at least put up with it. After using it for a little while, I’m starting to wonder if I can.

In the below screenshot, you can see just how lacking viewing the web can be. This, again, is not a huge issue to me, but where the issue lies is with productivity. Since I plan to be productive while on the road, being limited to seeing so little on the screen at a time can be a little stressful. Although I haven’t used it for productivity yet, I can picture what things will be like when I have the GIMP, Bluefish and Firefox open all at once… and that’s only three programs! 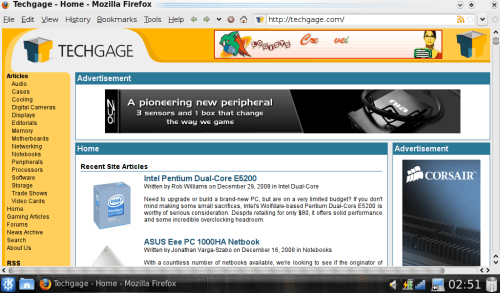 Granted, I understand that my needs while on the go are a non-typical of what audience netbooks cater to, but for the sake of even further adoption, I’d love to see netbooks come out in the near-future with the same-exact form-factor, but a larger resolution. I’d suspect that 1280×800 on the same sized screen (well, ideally the ratio should be corrected) would be far better. At 1024×600, we have 614,400 pixels to work with. With 1280×800, we’d have 1,024,000… that’s a huge gain.

I’m not sure what to expect to see at CES in way of new netbooks, but I really do hope to see some that feature for one, a higher-resolution screen, and two, at least 2GB of RAM. Although 1GB is typically enough for most people, memory is so cheap nowadays that it would give a little more flexibility to those who want to use their netbook for more than just typing and web-surfing. Of course, we might run into the issue where beefing up a netbook could cause declines in regular notebook sales, so it’s a tough issue to tackle.

After CES is over and done with, I’ll report back here with updated thoughts. At this point, I’ve only used the netbook for a week, and I really haven’t done anything on it except the setup process. Even with that, I spent a lot of time SSH’d in to take care of application installation and the like, simply because I didn’t feel like using the smaller keyboard or dealing with the lower-resolution. Announcements and meetings aside… CES is going to be pretty interesting for me, I think.