After you install the program, you will have a SmartStart icon on your desktop. Launching this will bring up the main GUI for the program and it is what allows you to access all the individual programs that were bundled. There are no differences between version 6 or 7 here, which is a good thing since you will know what to expect. Upon browsing through the various tabs, I counted 49 different launchers. I then realized that I did not have the Super User option clicked, which opened up even more. 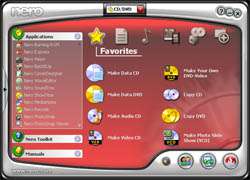 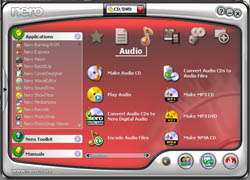 To the left of all the launchers is a list of the individual programs. These are so you can launch a respective program fresh without it ready to do anything specific. This is different than the main quick launchers, because those will launch one of those programs, but be ready to prompt you to do that specific task. 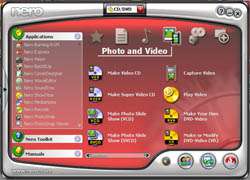 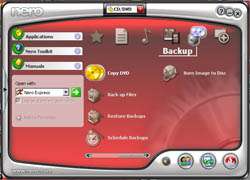 The first tab are for “Favorites” which are tools most frequently used according to Nero, but you can remove and add your own. From here, you can create a new Data DVD/CD, Audio CD or even a VCD. The second tab is for Data and is my personal most used. The launchers here will allow you to burn straight data to a CD or DVD, and even a Data/Audio CD. This one is particularly interesting, because in reality, it will allow you to make an enhanced Audio CD.

What is Nero Digital?
The Nero Digitalâ„¢ audio and video codec is completely based on the industry standards MPEG-4 ISO 14496-2/-3/-10, allowing the flexibility to play other popular MPEG-4 content, yet offering additional features and advanced technology that transcends the next two decades.

Audio is the third tab, and one of the coolest by far. Here your options are far from being limited to making a standard Audio disc. The first one I tried out, was the “Convert Audio CD’s to Nero Digital”. To test this out, I threw in one of Social Distortions discs, “Prison Bound”. Once I did that, the program prompted on whether I wanted the CD info grabbed from a DB, to which I of course clicked yes.

When I was finally at the main UI, I immediately went to check the settings area to see how much power they give the user. First and foremost, I checked out the Bitrate options, and was surprised to see options from 16Kbps all the way through 448Kbps. To see some differences, I ripped track 5 off the album at 128, 320 and 448Kbps. 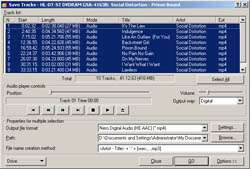 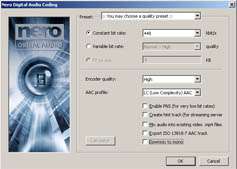 The 128Kbps version rolled in at 4.98MB, the 320Kbps version at 12.3MB and the 448Kbps version at 17.2Kbps. There are obvious differences between 128Kbps and 320Kbps; if you have ever compared the two you know what I mean. I could not however hear any differences between 320Kbps and 448Kbps, but a true audiophile could. If you wanted to archive your audio in an ultra-high quality format but find Lossless to take up far too much space, then 448Kbps may make a good choice.