This is a great tool for those who have high-quality audio files but want to downgrade them so that they can fit them on their MP3 player. This acts like the Nero Digital app above, but it will accept any of your audio files and convert them into either .AIF, .MP3, .MP4, .WAV or .WMA. There is a PowerPack LAME encoder also, but you need to register your copy of Nero to receive the serial code. Once you input that serial code, you will have access to it. 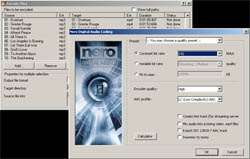 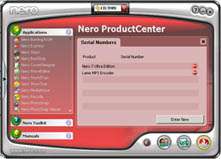 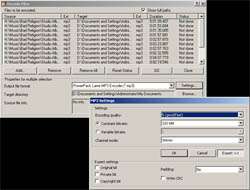 One thing that I would like the encoder to support is alternate installs of LAME. I don’t know what the PowerPack LAME is, but I’d much rather stick to the latest BETA or latest stable version. Another thing I should mention is that the encoder will copy and paste the file name, only changing the extension. I would have liked to see an option to rename the files as they are re-encoded, but we are left short there also. Overall though, the encoder works great, and is perfect if you need to do some quick downgrading.

I should note that you can download a LAME encoder and others for use in Nero from BitBurners, but the latest version is not updated very often.

If you ever wanted to create an audio CD, but wanted to also include data on it also, here is the tool for you. We all buy music CD’s that end up having special content if you throw it in your PC, and this is an app that allows you to make your own. 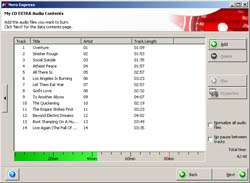 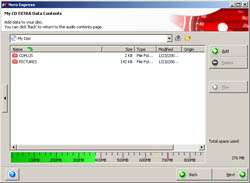 The tool first allows you to add your songs, and then add whatever else you want. For my tests, I took one of my favorite albums by Bad Religion, “The Empire Strikes First”, and then added the album cover .JPG to the disc.

Of course, you could even add software, videos, documents and anything else that would add to quality of the disc. This is a great tool for music artists or a regular Joe who may just want data added to the disc so they doesn’t need two separate ones.

NeroVision is by far one of the best reasons to pick up a copy of Nero. Here you are able to create a VCD, Super VCD, VCD Slideshow, DVD Video and much more. If you have downloaded videos off the internet, or archived family videos that you want to transfer to disc, then this is a tool you will get addicted to. Both the VCD and DVD creation tools are identical for the most part, but the DVD creation has a few more options in terms of quality scaling. 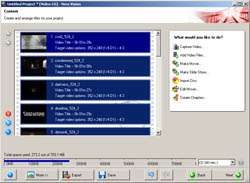 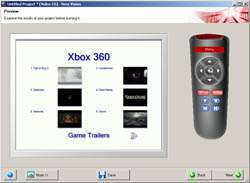 You first are able to drag and drop any video you want to include on the disc. After that, you will have many available options at your disposal. You are able to design a menu system by choosing a background color or picture, a chapter layout, font and color scheme and even buttons. It’s an all in one tool that’s rather simple but can help you design a quality looking disc. 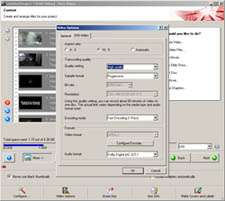 If you want to spice up your videos, you can use the make movie feature which is very similar to Windows Movie Maker, but more advanced. You can do the usual drag and drop to place your video in the timeline and add numerous video and transition affects. I can see how anyone can lose countless hours while playing with this, because I did just goofing around with some Xbox 360 trailers. Once you are all finished tinkering around, you can export the entire movie as an MPEG, or burn it straight to CD/DVD.

Another great feature of Vision is that it can capture video from an external device, such as your DV camcorder. It will record as much video as you need, and then allows you to archive the video for use later.