There could be multiple reasons why you would want such a tool, but the main one would be to trim down your DVD video so that you can bring it with you. For instance, you will be taking a flight out of town and want to bring a few movies with you to watch on your laptop. A direct rip could take near 8GB of HDD space, or with this tool, you can have it take as much as you’d like it to.. but of course it will affect the quality.

To test a few scenarios, I took one of my favorite concert DVD’s, Lamb of God – Killadelphia. One test I did was take the main movie, which was the 60 minute performance, and reburn that to a DVD in the Nero format. There are plenty of options available to you from the get go. You can choose to crop the picture, edit the ratio and select which medium this will be burned to. 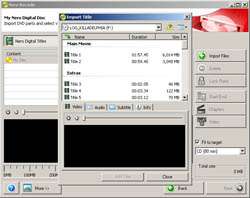 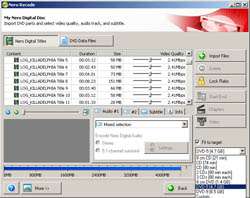 Depending on what settings you choose and which medium you plan to watch the video on, it will drastically affect the video and audio quality. There are plenty of presets available to you also, and these are:

That is a LOT of choice right there. The higher the definition, the longer the process will take. The Portable mode proved to be about 8 times faster than the HDTV setting for me. If you add AVC (Advanced Video Compression) into the mix, it will take even longer (think five times as long at least) but will cut back on sufficient space. I had one AVC HDTV project going on 15 hours straight, so I decided to halt it since it only finished it’s first pass.

After the HDTV performance rip was burned, I immediately threw it in my Xbox 360. Yes, I am one of those people who don’t own a real DVD player but rely on a console. At any rate, the disc didn’t work and was detected as a “Mixed-Mode”. Since I am usually slow to catch on, the Recode took the movie and spun out a .MP4 file, which is obviously not a file the console will recognize. If you wish to watch movies like this on your standalone DVD player, you will need to make sure that it can read the MP4 file format. 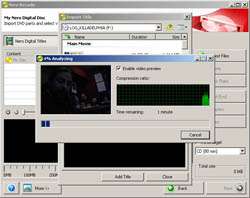 On your computer, Quicktime will use this file natively, as well as Nero Showtime which is included in the Ultra Edition. As an open source alternative, VLC Player will also run those files perfectly, and is my personal choice. By viewing the original DVD and this Recoded copy on the computer I saw no real differences at all. The sound was perfectly sync and sounded just as the original did. Since Nero technically took a portion that was 4GB to begin with and recoded it to 4GB, there was little loss to take place.

Even when I took the same performance and recoded it to fit on an 80 minute CD, the quality was still pretty good. Of course the resolution was quite small, something like 320*240, but it would suffice for a laptop if you are not that fussy about things. I however am quite fussy, so the DVD rip that weighs in at 4GB is not too bad either. In the end, it’s just good to have this much choice. 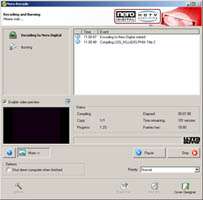 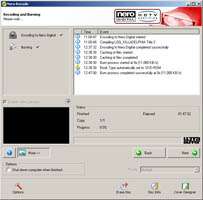 One thing I have to mention is that if you have a copy protected DVD movie (or disc in general), you will not be able to re-encode it. Surprisingly, this Lamb of God DVD was not copy protected, but all of my other concert DVD’s were. There is no way to get past this hook with Nero since that would land them in hot water, so if you wish to use Nero to re-encode a DVD movie, you will need to rely on third party or open source projects to subtract copy protection from the equation.