One of the best features of Linux is its sheer number of free available applications. But once in a while, certain commercial offerings deliver enough features and an ease-of-use that makes it worthy of consideration. Nero Linux is one of those. Now in its third iteration, Nero Linux remains the definitive optical-burning tool for the OS.

When I first saw the press release in my inbox for Nero Linux 4, I was excited. I’ve been using Nero Linux ever since it first came out four years ago, so I couldn’t wait to see what was new in the latest version. Well, I don’t think anyone is going to claim that Nero Linux 4 ships with a slew of new features, because it absolutely doesn’t. Aside from Nero Linux Express, I can’t see myself personally making use of the other new features, and I have a feeling the situation will be similar for a lot of people.

The truth is, Nero Linux 4 could almost be Nero Linux 3.9, because although Express is a nice feature, I don’t think it’s so monumental that it deserves to bump the application up to the next major version. After all, Express is simply another UI for getting the same thing done… there’s no truly new functionality here.

That all said, I’d really like to see some major additions made to Nero Linux in the future. For as long as the application has existed, I’ve seen people request over and over again for video-related features, such as Nero Recode. I’m with everyone there… it’s something I’d like to see as well. I can understand to a degree why it’s not here, but if people are willing to purchase the product, and I assume they are if Nero found it worthwhile to put out three versions so far, then additional features like that would be worth it.

Then there’s also the feature I’d like to see regarding secure audio CD ripping. That to me shouldn’t be a luxury, as even free ripping applications, such as K3b and RubyRipper, offer it. Or, how about a Linux version of the company’s MediaHome feature? Or Nero Showtime? It’s not as though Linux is incapable of handling these tasks. In fact, I’ve heard many times in the past that it’d be even easier to develop such features under Linux. It of course comes down to the fact that Linux is a much smaller market, but Nero might be surprised… the extra development time required for such functionality might pay off in the long run. 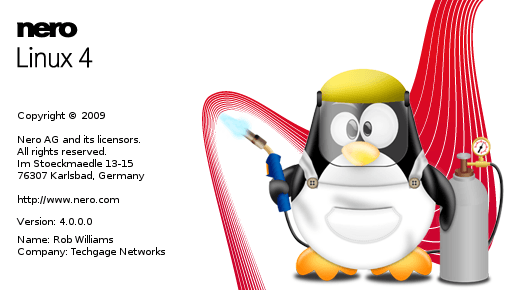 If there’s one thing I can say, it’s that I appreciate Nero for releasing a Linux version of its burning application at all. There’s a countless number of developers out there who ignore Linux, and sometimes even Mac OS X, like the plague, but Nero has been supporting the OS in a great way ever since the original Nero Linux. Big kudos to them.

Before I wrap up, I do have to mention two issues I experienced when using the application, both of which are rather hard to ignore. The first is with the Nero Linux Express application. Sometimes, when clicking to create a new data CD or DVD, the application would crash with a segmentation fault. Other times, it would work fine. I don’t get it. The other issue is with creation of multi-session discs. As far as I can tell, the feature is broken. On two different computers, I’d get an error whenever I’d try to continue a multi-session disc, so bear this in mind if you regularly create those. I’ll be raising both these issues to Nero shortly, although I’d assume they are already aware of them.

So, the end question is this… would I recommend a purchase of Nero Linux? Yes, without question. It costs $20, and that’s well worth it for such a robust burning application as far as I’m concerned. Free alternatives work fine also, but I’ve always found Nero Linux to be more reliable overall, and more of a pleasure to use. Your opinion may vary, and if so, then free options might be better suited for you.

Nero Linux doesn’t offer a slew of features above the competition, but the entire application is designed in such a way that it’s easy to use, for both novices and power users alike, and it’s one application I personally wouldn’t want to go without. If the question is shifted to, “Should I pay $12 to upgrade from Nero Linux 3?”, then it’s harder to answer. If you like the idea of Nero Linux Express, and can take advantage of the other new features (which are few), then sure… $12 isn’t exactly a lot of money. If you’re happy with Nero Linux 3, then 4 isn’t going to wow you to the degree that you’d hope.