As you would expect, you are able to rip audio CDs with NeroLinux in addition to burning them. To do this, simply hit F9 and a Save Tracks Dialog appears. You will see a blank track listing, so you need to push Internet DB in order for it to grab the actual track list. I had no such luck here. After pushing the button, up would pop a dialog that would attempt to receive the track listing… indefinitely. After allowing it to go on for five minutes, I had to kill the process entirely. There was no way to simply cancel it or close the program properly. 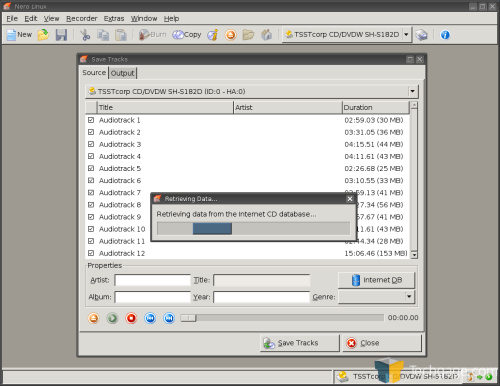 Loading up k3b, it detected the track lists fine, for all three CD’s I tested. Both applications were using the identical freedb settings, so I am not sure what the hold-up with Nero was. I cannot recommend Nero for audio ripping, since no one wants to manually type in the entire tracklist by hand.

Because I am a music buff, I wanted to check out their Encode Files option, which launches when you hit F8. It’s a simple prompt, with the ability to add tracks to the list and then choose which format you want them outputted to. Here is where I get confused again.

Note the “Settings” button that’s dimmed. I was unable to figure out how to use this function at all. The drop down offers WAV, FLAC, MP3 and OGG, but none of them light up that button. I was hoping for the ability to specify an encoder of your own choosing or at least being able to change the encoding switches, but it appears as if that is a no go. 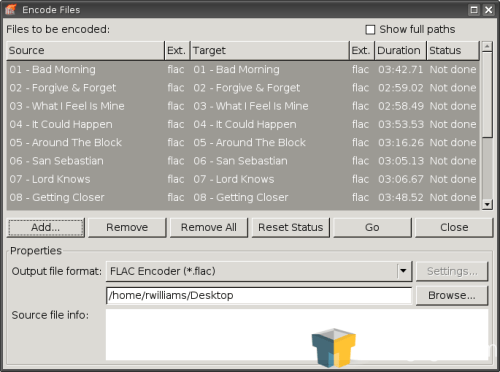 After playing around for a while, I wanted to answer the big question. What can NeroLinux 3 do that others can’t, besides HD-DVD and Blu-ray? Well, if you want to get down and dirty with the options, there is an insane amount of functionality here, just that half of it might not matter to many people. That includes me, but I admit it’s nice to have it all present in case the time presents itself that I actually need it.

In the end, I just like how NeroLinux works. I love the GUI, the sheer amount of options, and the fact that it’s just a friendly application to use. It’s leaps and bounds above NeroLinux 2, I can assure you of that. If you are a Windows user moving over to Linux and want to use a burning program you are familiar with, it’s hard to go wrong with NeroLinux. I won’t say I prefer it over k3b, but in some respects I do. I can see myself using this more often, simply because of its design designed. 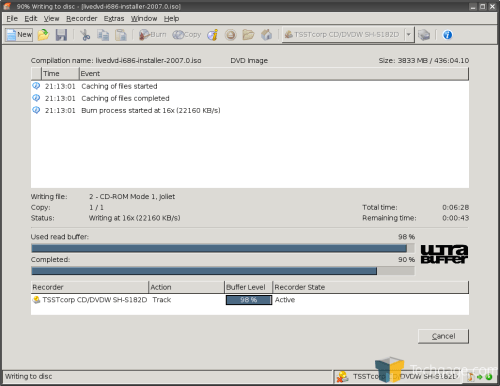 That said, it still lacks a lot of what I’d like to see. On the Windows side of things, we have great video creation support, DVD movie authoring, video re-encoding, TV capture features, audio editing, robust video player and much more. It’s understandable to see the Linux version lacking so many features since many of them are comprehensive and because of lack of overall demand.

For those interested, I did find NeroLinux faster than k3b in the few tests I performed. The main reason behind this is that k3b had “Updating RMA” statuses that delayed the completion. The test I focused on used a 3.7GB ISO, which Nero burned in 7:26 and k3b in 11:02. I am not sure if that type of delay is normal, but it happened with each test.

I find NeroLinux 3.0 a vast improvement over 2.0, but Nero will find themselves having the need to add more features in order to grab a great deal of the Linux market-share. I’ve mentioned k3b many times, which is because it’s a very complete solution that happens to be completely free. NeroLinux offers HD-DVD and Blu-ray support, but other than that, users might find themselves not even missing the other features that it has, that k3b doesn’t. Of course, if you want a reason to pick up a Blu-ray or HD-DVD recorder, now you have one… if you are willing to part with upwards of $500.

May 24 Addendum: NeroLinux 3 has now been released and costs $24.99USD for the serial number. In my opinion, this is a far more sensible option compared to how NeroLinux 2.0 was sold.