by Rob Williams on April 1, 2006 in Miscellaneous

If you are looking for an entry level camera, is the L1 a good choice? The camera has it’s share of problems, but does the great picture quality make up for it’s other issues?


The Coolpix L1 has a lot to offer, and there’s no doubt it’s a decent camera for the first time camera user or someone who just wants the ability to take really quick photos without worrying about them looking horrible. Fact is though, this camera is probably not the best choice as it stands. There are a few problems that just may sway you away from a purchase.

First things first. I found the batteries would die unbelievably fast. I never actually timed it during use, but they died far quicker than I expected. This was using the included batteries and my own personal rechargeable batteries. The second main problem is the delay between picture taking. Heck, the camera is slow in general. Turning it on takes about three seconds. If you suddenly need to take a quick picture, the load times of the camera will probably get on your nerves after a while. 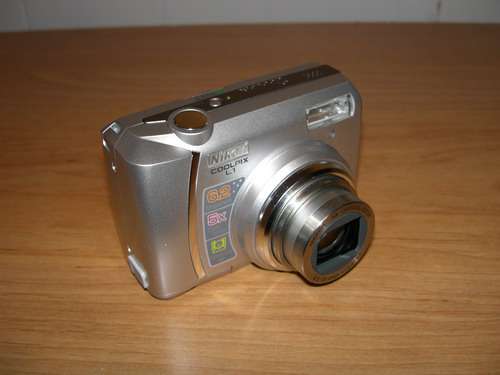 Even though I didn’t share any videos taken with the camera, you are not missing much of anything. Not that great video quality is expected from any digital camera, the noise level in the ones taken with the L1 were horrible. These are the primary issues I had with the camera. Perhaps if I owned the camera and used it on a regular basis, some opinions may change, or I could very well find more problems, I don’t know.

Ahem. Besides the fact that the camera is clunky, it does take some great pictures, although some will need tweaking. Some outdoor pictures, especially of a rather large landscape came out over exposed. As you can see in the picture of my back yard though and in some others, the color the camera captures is extremely nice. The 5x optical zoom is welcomed when attempting for great macro shots. As you can see in some of the photos, it pulls off these shots pretty well.

Overall, I am awarding this camera a 7 out of 10. The only reason it doesn’t receive a 6 is because the camera does take rather good pictures for the most part and the coloring is great. This is still a good camera for the average photo snapper, but you may want to look elsewhere for a less stressful camera to use :)

If you wish to discuss this review, please feel free to do so in our related thread!